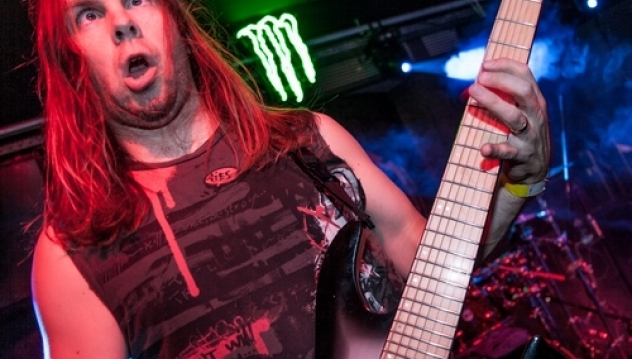 It has been ten years since bands like Killswitch Engage, Lamb of God, God Forbid and Unearth released a handful of signature albums that would divide the history of metal music as 'before' and 'after' 2004. The so-called New Wave of American Heavy Metal swept the metal world and changed it forever.

One of the places that it somehow missed seeping, however, is Bulgaria. UNEARTH's show in Sofia's Mixtape 5 Club on Tuesday was only the third time such a band played in Bulgaria. And the first time one did as a headliner. In a way, it was the Bulgarian audience's first contact with 'the real thing.' And the real thing sure makes all of the imitations that we've seen so far – both local and European – seem like a cargo cult.*

Openers Dash the Effort are an example for that. Besides one more leftfield track that has an underlying electronic beat and the vocals are sung mostly by bassist Magi, the rest of their set seems like it came straight out of the metalcore textbook – both musically and visually.

It's different when one of the bands that actually wrote that textbook takes the stage.

When UNEARTH do, they launch straight into opened 'Giles.' Seconds later the song's wobbly arpeggios kick in, as if to remove any doubt that the band can pull off its quite challenging songs live. Not only that they do, but they do it in an ridiculously tight manner! Before the audience manages to catch its breath, the band continues with 'My Will Be Done' and 'Endless.'

It is exactly the latter song that introduced me to this breed of metalcore more than a decade ago. Previously I had no idea you could mix Hatebreed's brutality and breakdowns with the melodic death metal of bands like At the Gates and In Flames. Most people I speak to at the show have similar stories about the importance of UNEARTH in forming their musical taste.

However, for such an important band, the show seems a little bit underattended. There a little over a hundred people. Is it that the ten years it took UNEARTH to get here have taken their toll? Is this a foreshadowing of a moment when UNEARTH, like their peers from Chimaira and Shadows Fall, will also give up, crushed by the harsh reality of the music industry?

'No,' is the straightforward answer vocalist Trevor Phipps gives me before the show when I ask him the same question. This band has no intention of giving up. And this is more than evident from the brand new track they play next – 'The Swarm.' It is explosive, super fast and angry. There are no attempts to soften the band's sound an make a compromise that would grant it commercial survival. Just merciless metal!

But UNEARTH don't have only their determination to rely on. The band also has a huge back catalog of classics, many of which we also get to hear tonight. The insanely fast 'Sanctity of Brothers,' the obviously In Flames inspired 'Zombie Autopilot,' the melodic chorus driven 'Last Wish...'

The necessary energy definitely is present in *Mixtape 5* tonight – and it is not only on the stage, but in front of it as well. Phipps says that this is the best crowd the band's has had so far on this tour. And he seems sincere. Later he tells me the same again, after I, as the typical complaining Bulgarian idiot, start telling him there were too few people.

The truth is that whoever missed Unearth, missed what is probably the best live band they are likely to see any time soon. Their loss.