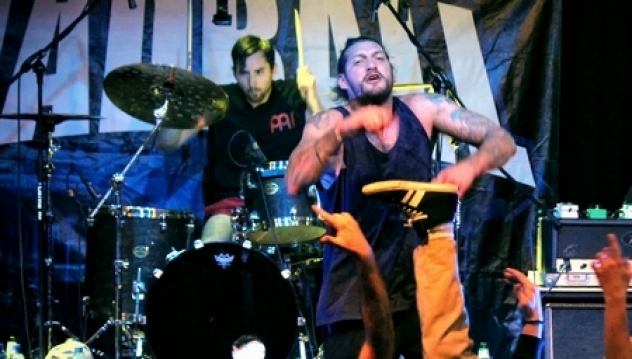 “I’d swap some beer for a cigarette” - well, that’s what I call a good start of eventual negotiation. This offer comes in front of the doors of Mixtape 5 from a tall and slightly drunk young man with a plastic bottle of beer in his hand. I make my best to explain that I don’t need his beer and I have already had some whiskey, deliberately avoiding the importance of the hygienic reasons..

“Oh, that’s OK- he says- I’ve had some rakia before the beer too-Then he looks at me- But I’m young, you know?” He’s right. Ten of fifteen years ago I would have probably done the same thing, the same way. I give him a cigarette and he draws his last conclusion from our meeting - “You were young too!” Yeah, I was... Then his mobile starts to ring and I go inside tolook for a good place, because it already 22.30 and MADBALL are about to start any minute now.

Actually doors opened at 19.00 and the Greeks SENSELESS played in front of 100 people, only 20 of which showed some signs of high-spirited appreciation. At the end of their set, during the last song, “Decapitated”, thiese numbers increased with, let’s say, 10 more people. They are new and considered unknown, but you can go straight to their facebook page and download the three songs included in their latest EP “MMXIV” for free.

BFDM attract more crowds. Unfortunately the merchandise stand doesn’t seem to offer any BFDM t-shirts or at least I don’t see any. They are tight and they have a killer rhythm section. Their best moments on stage look and feel like an intense session at the gym. Still you can easily notice first signs of the upcoming physical activities that will overtake the place soon.

When LAST HOPE take the stage in a slightly unusual configuration as the line-up tonight misses the guitarist Naso, the meat grinding finally begins. “Come closer!” - Alex summons the crowd and they don’t need another invitation to start the mayhem. LAST HOPE was and continues to be the epitome of stability through the years. I’ve heard some of their songs in different settings and sometimes they sounded more metal and sometimes they were more punk, but those were just shades, hues and touches of different time periods.

Tonight even with just one guitar LAST HOPE were enthusiastic, probably because of the upcoming tour. “Another State Of Mind” was one of the milestones of this show. This song is only 2 years old, but is already a classic. The other milestone was the traditional greeting to the police at the end of the set that was sung along by almost everyone in the house.

MADBALL were once young too, probably in 1988 when Freddy started the band with his brother Roger playing the bass and Vinnie Stigma on the guitar - both from AGNOSTIC FRONT. The rest, as they say, is history, but we’re part of this history too. This is the 4th MADBALL visit in Bulgaria and it comes only 11 months after the 3rd one. Although the backdrop clearly shows the “Rebellion” EP artwork, one of the reasons MADBALL are here tonight is to present their brand new full length and thet is why they hit us immediately with the self-titled “Hardcore Lives”.

It is full house now and the temperature has risen. This set is slightly over an hour, but it is a very well balanced combination of new and old material that can guarantee that the crowd surfing, stage diving and singing along won’t stop for a second. There are three songs off the new album, one off the EP (“It’s My Life”) and it is just before the final “Pride (Times Are Changing)” off “Demonstrating My Style” (1996). No songs from the band’s last album “Empire”, which was released 4 years ago, but all the other releases from the previous decade were represented with a song or two.

MADBALL are MADBALL. They are as professional and flawless as ever. Insired by the crowd’s reaction Freddy said “thank you” to all the people who had come for the show, to those who had travelled from far away to attend. “That’s the beautiful thing about this culture" - he said - "there are no barriers, no walls...” And yes, one of the reasons they cam down here, as I said, was their new album, but there’s another one - MADBALL obviously love it being here among us and no one is surprised when they promise to drop by again next year.