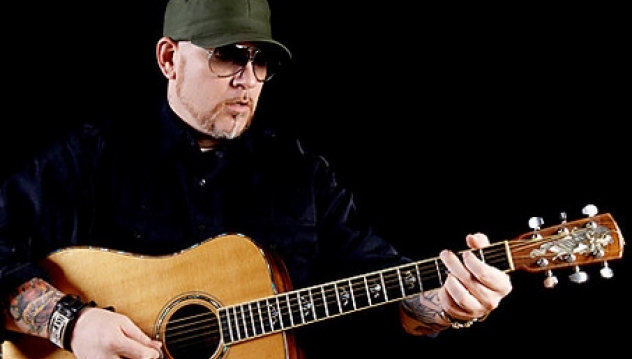 I recently read an interview with Jerry Cantrell from Alice in Chains, in which he was talking about the band's acoustic EPs. According to him, the idea was for the musicians to see what their music is really worth – and if they wrote songs that are really that good. When a song is really good, Cantrell explained, it will still sound great even if you remove all the effects, distortion and what not, and strip it down to just an acoustic guitar and a vocal.|

Everlast's acoustic album from last year, 'The Life Acoustic,' proved that the former MC turned alternative blues troubadour's catalogue could stand this treatment as well. When you unload all the hip-hop beats, female backing vocals, guitar effects and all kinds of modern recording studio wizardry, and leave just an acoustic guitar, some restrained keyboards and the deep, thick voice of the musician born as Erik Schrody, the songs sound even more enchanting. This works because they were never about flare to begin with – with Everlast, the focus has always been on the stories of struggle he tells, and singing them in a way that makes you live through them as well.

It seems the Bulgarian audience is hungry for that kind of experience – the tickets for Everlast's show in Sofia's Terminal 1 club last night were sold out just two days after they became available. So, a second date was scheduled for the next day, November 24 – only to also get sold out in a matter of days. Now, compare this to what you may read about Everlast in the American press lately – basically just puns about how he hasn't had a hit since 1998's 'What It's Like' – and tell me who's missing something here...

But back to this side of the Atlantic. When at 21:30 PM the 400 owners of tickets for tonight's shows are still making their way through Terminal 1's corridors towards the club's main hall, opening band No More Many More is already on the stage. Thankfully, their music is much better than their band-name. Acoustic guitars, soaring vocal harmonies and lyrics that share the band members' political insights. One might say they sound like a Bulgarian Everlast with some specifically Bulgarian worldview in the lyrics. Which is not necessarily a bad thing.

By the way, it's my first time in Terminal 1 and I can't help noting that it is a very cool place. A mid-sized venue, architecture with decent acoustics, a balcony and also a nice location in the center of the city. If the bargain for this place was to lose the Bulgarian alternative music scene's former stronghold, Stroeja club, it seems we have nothing to look back for with regret...

At 22:30 PM Everlast comes on stage, accompanied by keyboardist Brian Velasco and a bottle of Jameson whisky. He just says 'hello' and goes straight into his newest song, 'Gaza City Blues.' It doesn't seem like he's in the best mood. But while the song may be brand new, it works perfectly as an opener, as its chorus – basically repeating 'we pay so dearly for it' – is easy for the crowd to pick up and sing along to, setting the mood for what's about to follow.

The slower songs like 'This Kind of Lonely' and 'Weakness' really blossom due to the stripped down arrangements that shift the focus towards Everlast's unstrained and emotional delivery. Sounds rather simple. Because it is. But songs like these don't need to be complex and overstuffed to work. And just when you fear the show might get one-dimentional due to this simplicity, a somewhat different song kicks in – like 'Friend' where the keyboard melodies take the lead for a change, or more uptempo ones like  'Stone in My Hand' that get the crowd moving.

Everlast doesn't really speak that much. Beyond 'hello' at the start of the show and announcing the songs before playing them, he doesn't say much. Turns out it's not his mood that's bad. Four or five songs into the set he explains that he got food poisoning in Greece and can now barely stand up because of the fever he has. 'All I can see when I close my eyes are lights and colors,' he says. 'If I fall on stage, don't mind it. Go get a drink, I'll get back up.' He doesn't fall, though. He even finds the time to thank the crowd for singing along the songs without having to encourage it to do so.

This, of course, intensifies as we get closer to the set's end, where most of the bigger hits are. 'What It's Like,' Put Your Lights On,' the cover of 'Folsom Prison Blues' (now sounding closer to Johnny Cash's version due to the lack of a hip-hop beat), 'White Trash Beautiful' (I really pity the people who have ignored this album due to the lack of an Mtv hit-single!) and the inevitable final with an acoustic rendition of 'Jump Around' – which does away with the boisterous rap of the House of Pain original, in favor for some cool restraint that comes from years of experience. You can call it wisdom if you like. This night Everlast sounds like a veteran by the campfire with an acoustic guitar in hand. And I'll be damned if he hasn't mastered that type of thing.

I can only sincerely envy the people who are yet to see this show for the first time tonight...