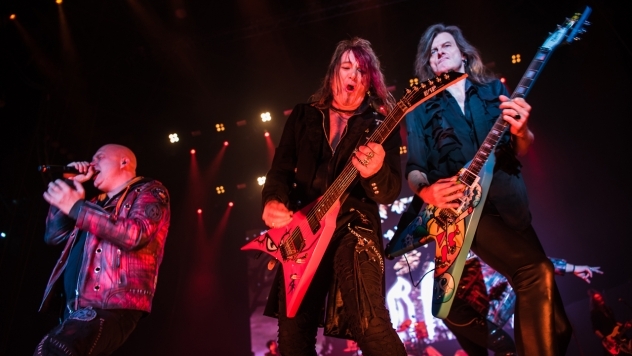 Let's not pretend - HELLOWEEN is one of the most favorite bands of the Bulgarian metal fan. One or two more concerts and the German legends will put a double-digit number of visits here. And it's not strange - in the 80's the metalheads in Bulgaria were acquainted with only a handful of bands and HELLOWEEN is one of them.

It is no secret the romantic dream of the old fans to see their beloved band again with Michael Kiske back on the microphone. While this seemed impossible in the 1990s and the past decade, hope gradually ceased to sound like a chimera.

First, Kiske began to appear in various heavier sounding projects than the music of his solo career. Second, he made a band with his former colleague from HELLOWEEN Kai Hansen. And Kai - well, he was definitely the most real heavy metal fan in HELLOWEEN. And the most sincere (and grinning) one.

And so this year, Michael Weikath, HELLOWEEN's neat leader, has finally agreed to a dialogue and sat down with the former guitarist of the band Hansen and its legendary singer Kiske. Which led to a white flag from all three sides and a 7-member band for a giant world tour under the pumpkin, pardon - the flag "Pumpkins United".

The concert last night awakened the dreamy heavy metal fan in me, and I have to be deaf and blind not to like the show the Germans made. The band is on stage with a big screen projecting jolly animations in the spirit of their 80's singles' artwork.

The stage decoration and the killer light show perfectly complement the visual part, and on the musical side - well, it is a completely different thing, coming from an era that skeptics may disregard as forgotten, but let's see them tryin' to explain it to nearly 10,000 fans in Arena Armeets.

It does not matter whether you are a former, current or future HELLOWEEN fan. The concert that the sevens perform is an absolute pleasure for anyone who could accept the fun part of heavy metal and loves to sing along and headbang on merry yet heavy or balladic songs that have become emblematic for 3 generations of metal fans.

It is amazing how the two main singers divide the vocal parties. And it sounds so damn good. Apparently Weikath possesses neat sense when choosing who to stand behind the microphone - albeit different in timbre and vibration, the voices of Deris and Kiske sound amazingly well in duet, splitting verses or singing together in choruses. And when from time to time enters the screaming voice of Hansen you can't help the chill on the spine..

The concert begins with the epic 'Halloween', passes through 'Dr. Stein' and 'I'm Alive', we hear the newer (just 17 years old) hit 'If I Could Fly', the forgotten but really cool 'Kids of the Century'... actaully, HELLOWEEN walk us through the most favorite and important tracks of the first 20 years of their career. Interestingly, the band does not included in its set list their first joint song this year, also bearing the name of the tour 'Pumpkins United'.

Kiske and Deris rotate the vocal parties, and Kai Hansen takes full of the vocals for a smashing medley including 'Starlight', 'Ride the Sky' and 'Judas'.

The show also includes a moving tribute to the late original drummer Ingo Schwichtenberg, screening an old drum solo of his, where Dani Loble enters for a jam through the decades..

There is a lot, really much joy for the fans. And when 5-6 beers and 3 hours later the concert ends with the inevitable 'Future World' and 'I Want Out' and we have sang and drank with huge smiles on our faces, Ruslan of Wrong Fest declares, "This heavy metal!" Well, that's it. Heavy metal!