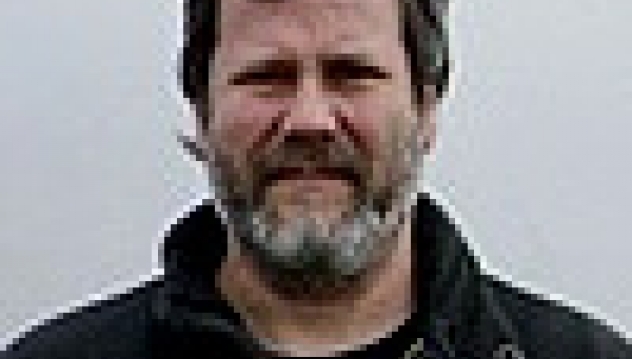 About his new project THE TALKING BOOK, The FNM reuinion experience and many more

Faith No More bass player and founding member BILLY GOULD has been a close friend of Tangra Mega Rock and one of the inspirations for us behind creating the radio back in 2006.

Now, Mr. Gould is back with a new project - THE TALKING BOOK and talks to TMR's NassoВ about it.

OK, WHAT CITY ARE YOU IN - SAN FRANCISCO?
Yeah, I'm in San Francisco. 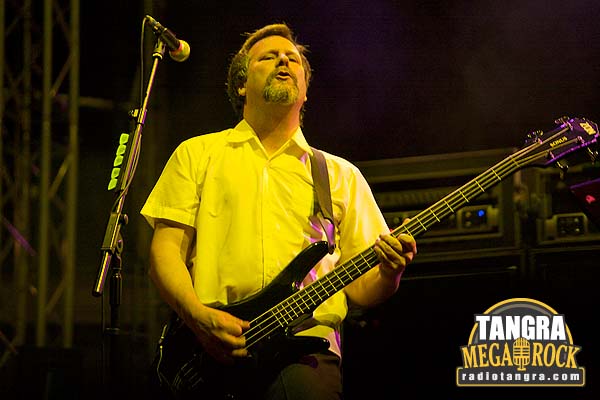 OK, WE'LL START BACK TO FRONT AND GRADUALLY GET TO THE NEW ALBUM, WHICH WE PLAYED MOST OF LAST WEEK WHILE YOU WERE REPORTEDLY OUT GROOVING TO ECHO AND THE BUNNYMEN.
Well, you know, the sad thing is I didn't get in the show, I missed it.

YOU MEAN YOU COULD NOT GET IN, OR IT WAS OVER BY THE TIME YOU GOT THERE?
I could not get in.

YOU OF ALL PEOPLE? YOU PLAY IN FAITH NO MORE AND THEY WOULDN'T LET YOU IN?
I know. Heartbreaking, isn't it?

THIS MEANS I'M CHUCKING ALL MY BUNNYMEN CD'S IN THE BIN RIGHT NOW.
You know this strange thing happened last week when we were supposed to do this interview. Somebody came over to my house and they chained me to the air conditioner, so I could hear the phone ringing, but I couldn't get the phone.

THEY DID, DIDN'T THEY?
They chained me to the air-conditioning and I could hear the phone ringing and I wanted to answer it, but I couldn't make it to the phone.

I THOUGHT IT WAS EXACTLY SOMETHING LIKE THAT TO BE HONEST WITH YOU ,HAHA.
Hahah, that's exactly what happened.

NO ONE THOUGHT THE FAITH NO MORE REUNION WAS GOING TO HAPPEN, BUT IT DID. SO, LOOKING BACK, HOW WAS IT FOR YOU? DID ANYTHING SURPRISE YOU AND WOULD YOU DO IT AGAIN SOME TIME IN THE FUTURE?
It definitely surprised me. I think it was a great thing to do. Though I had more fears about it before we did it than excitement about it. Because, you know, we were 13 years older and we hadn't seen each other in a while, and I didn't know where everybody else's heads were at.

I was just hoping that we could focus and actually do a good job and I think the way it worked out it was much much better than I would have expected. I would say it kind of....hmm, let me think. I would say it was just a really positive thing. As far as doing it again, I would love to. I think that if we're gonna keep playing though, there's a certain point where you have to bring something alive, bring something new. And it has to be a creative experience.

It was great playing the old songs and getting back together as people, but I think we have to take it somewhere forward if we were gonna do it again.

OBVIOUSLY EVERYONE'S WONDERING WHY YOU GUYS DIDN'T RECORD ANY NEW MATERIAL.
Me too. Though we didn't write any new material. I mean we kind of decided we were gonna do this about two months before the touring started and we put most of our energy into just getting up to speed and getting back in shape.

WITH ALL THAT TOURING, I'M SURE YOU WERE PRIVY TO SOME INTERESTING ADVENTURES. WOULD YOU CARE TO SHARE ANY WITH US?
During the tour?

YEAH. WELL, FROM REHEARSALS THEN, IF YOU LIKE...
Interesting adventures? Gotta think about that one. I mean, the whole thing to me actually was so surreal, the whole thing was a strange situation. I mean when we used to tour back in the early days, we used to have to fight for everything, everything was a fight - we fought with each other and we fought because we were playing this strange music that people didn't seem to understand.

So I gotta say, the big thing that really left an impression with me was just that a lot of people knew our music and a lot of people liked our music. All the other stuff kind of comes secondary to that.
В 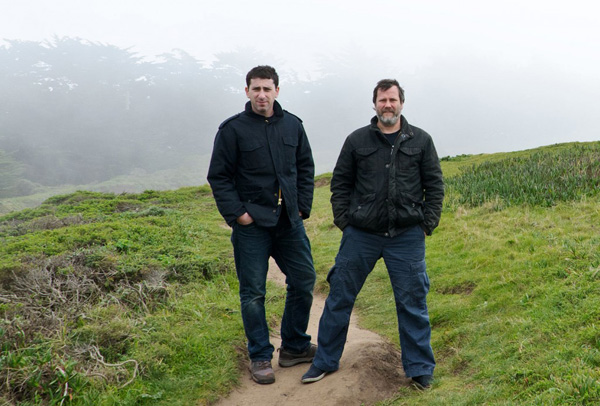 OK, LET'S TALK ABOUT YOUR LATEST PROJECT - 'THE TALKING BOOK', WITH JARED BLUM. TELL US HOW IT CAME ABOUT AND HOW DO YOU EXPECT US TO PERCEIVE IT?
You know, I was surprised you played so many tracks last week, because it's not something that people would normally think I would be doing. So, thank you.

YOU'RE WELCOME.
It's something that I...there's a guy in San Francisco - Jared, who I've known for years and he's done his own kind of sound collage type things over the years and I've kind of worked with him peripherally on it, helped him with things, with mixing and some mastering.

So we just did things together already and we decided why not try to actually do something that was musical. And this is what we did. It was something very different for me and it took a while to do, it took more than six months to do, but I think it was a really cool thing to do.

I really like how it came out, I like the sound of it and it doesn't have to mean anything to anybody, people don't even have to like it, I'm cool with that too. I'm happy with what we did and I can let it go, I can actually sleep good at night, knowing that I'm happy with it.

YOU'VE DONE ONE GIG SO FAR WITH THE TALKING BOOK, HAVEN'T YOU?
That's right.

HOW DID THAT GO THEN?
It went great. We got offered the show by Mike Patton, my old singer. He already had the gig booked and they were looking for another band to put on the bill. I just hung out with him one night and I brought him the CD, just so he could check it out, no other reason than that. And he called me the next day and asked me if we could do the show. Which meant we had to figure out how we could play this kind of music live, which was a little bit of a challenge, but I think that we pulled it off really well, I think that it went over great.

HOW DID THE AUDIENCE REACT - DID THEY APPLAUD POLITELY?
They applauded, they screamed and they yelled. It was like a rock show! We're playing this experimental music and they're like hooting and stuff. It was very bizarre, but it was cool, it was a good energy. Also I think we're gonna try to come to Europe, so with some luck we'll see you in Sofia.

YOUR WIKIPEDIA PAGE MENTIONS A PROJECT CALLED "FEAR AND THE NERVOUS SYSTEM", BUT SAYS NOTHING ELSE ON THE SUBJECT. SO, WHAT'S ALL THAT ABOUT?
Well, you know, believe it or not I got a call about two years ago from Munky, who's the guy in Korn. He had a couple of other guys with whom he was putting together some stuff.

They had their studio and he said they were doing something that was totally different from anything Korn was doing. We had a mutual friend who said he heard some of the stuff and it sounded pretty good, so I went down there to check it out and actually the music was pretty good. So I put some bass tracks on it. I know that a bunch of stuff was going on for the last couple of years, so they only just now got it mixed and mastered this month.

So I know it's finally finished and I just heard a copy of it and I'm impressed. I've gotta say - I'm impressed. I didn't really know what to expect, but I think they did a very good job.

IS THAT COMING OUT ANYTIME SOON?
It is. I mean, it just got finished, so now I think they're going through how they're gonna release it, who's gonna release it and all that kind of stuff and I'm kinda staying out of that part of it.В В 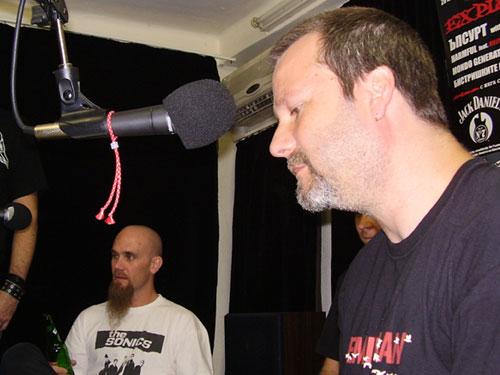 at Tangra Mega Rock studios in 2007

LET'S NOW TALK A BIT ABOUT KOOLARROW RECORDS, WHICH IS UP AND RUNNING AGAIN.
It is!

WHAT SHOULD WE BE EXPECTING FROM YOUR LITTLE ENIGMATIC QUIRKY LABEL. I HEAR YOU HAVE A VERY EXCITING NEW ADDITION FROM BOSNIA....
Correct, that's right. Dubioza Kolektiv from Sarajevo, who with some luck will be coming to Sofia in the next few months. They're cool. They're great guys to work with. I mean, my label's very small, if I want to continue I could probably only put out two to three releases per year, so when I decide to do one, I want to make sure I'm working with bands where I feel like we're really cooperating and working together. And I definitely feel like that with these guys. With La Plebe I feel like that. Pretty much the bands I work with I really enjoy working with them.

OUR STATION - TANGRA MEGA ROCK RECENTLY HAD ITS 5TH ANNIVERSARY.
Congratulations by the way!

THANK YOU. DID YOU THINK OUR RADIO WOULD LAST THIS LONG?
I know the spirit with this radio, I understand the people behind it, so I didn't doubt it for a second.

WHAT'S HAPPENING WITH THE "TANGRA MEGA MULLETS" REMIX THEN?
Right! Mega Mullets I am working on a remix for and I actually got to a point where I started hitting my head against the wall, so I took a little break, but there will be a Mega Mullets remix.

BY THE WAY, THERE'S A NEW JANE'S ADDICTION ALBUM COMING UP. HAVE YOU HAD A CHANCE TO LISTEN TO ANYTHING FROM IT?
I heard about it, but I haven't heard anything. 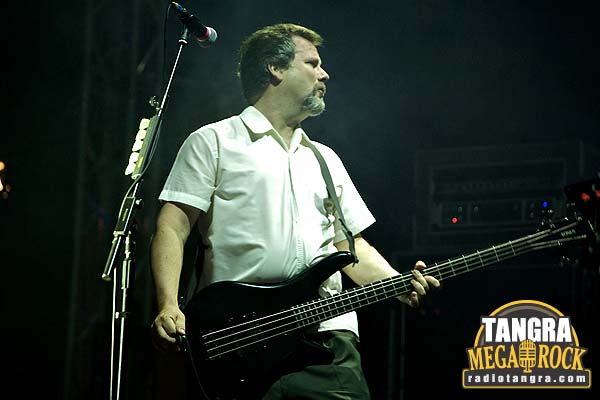 SO YOU'RE PLANNING A TOUR WITH THE TALKING BOOK. WHAT ABOUT AFTER THAT - GOT ANY OTHER STUFF GOING ON?
I'm already thinking about the next Talking Book. There's a lot of things. I'm doing stuff every day. I''ve got a little studio and I write all the time. But there's probably nothing I'm doing right now that I could really talk about, because it would be too early. I talked about a project I had once, about five years ago, that didn't work out and people still ask me about it. I'd rather keep my mouth shut until it's ready to come. But I guarantee there will be a lot of music and also check out our website - www.koolarrow.com

AND FINALLY, DID YOU GUYS GET OBNOXIOUSLY RICH FROM THE FAITH NO MORE REUNION?
Not obnoxiously unfortunately. I still have to be a nice guy to people.В