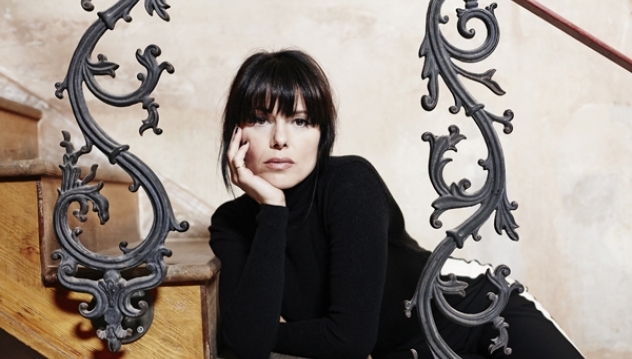 On Friday 21 September IMELDA MAY will be performing at an exclusive show in the magnificent Ancient Roman theatre in Plovdiv, Bulgaria.

The prestigious evening will be promoted by us - the Bulgarian independent radio station Tangra Mega Rock with tickets priced 15, 20, 30 and 40 Euro through EpayGo at this location and and every Easypay cashpoint.

A great occasion for us to talk to the great Irish singer and musician.

HI HOW ARE YOU?

I'm good, how are you?
WELL, OBVIOUSLY - 'LIFE LOVE FLESH BLOOD' IS A HELL OF A RECORD, BUT WE ARE HUNGRY FOR MORE...WHEN THE NEXT ONE WILL BE READY?
Oh wow, haha! Well, I'm supposed to be taking a little time off, but first I'm touring and then will take time off to start writing songs, poetry and everything...and I'm supposed to just be writing away, but first I have to do some gigs - we haven't been to Bulgaria yet, so I'm taking a break from writing to do some shows in Europe...The next album - maybe next year!
YOU ARE NOT JUST A FANTASTIC SINGER, BUT ALSO CAN PLAY A LOT OF INSTRUMENTS - THE QUESTION IS - HOW DO YOU WRITE - ON PIANO OR ON THE GUITAR?
Guitar! I write on guitar. I don't play that many instruments, but yeah, I play enough guitar to write.

THE ALBUM IS VERY DIFFERENT FROM YOUR PRIVIOUS WORKS AND YOU HAD EXPLAINED WHY IN SEVERAL INTERVIEWS...IT'S MULTI-LAYERЕD AND AT THE SAME TIME - SO HUMAN AND NATURAL...DO YOU BELIVE EXTRATERRESTRIALS EXIST?
Hahaha! I believe we don't know anything. We dont know a lot past our own galaxy, so it's quite possible.
WHAT FEELING INSPIRES BETTER SONGWRITING - SADNESS OR HAPPINESS?
Erm, I think both...But I think that when you're sad, you maybe reflect more, you know - you're upset and think more. When you're sad you take the time to do that, but when you're happy, you're just so busy being happy, you don't care. So I think it's more what you do with it, but I think any emotions are very good for writing and inspiration. Art is just the whole reason for all of it, it's the connection.

YOUR CARREER GAVE YOU THE CHANCE TO MEET AND WORK WITH SOME OF THE BIG SHOTS IN MUSIC - WHO WAS THE COOLEST?
Oh wow...Well, I've been lucky to meet and work with a l;ot of amazing people. JEFF BECK is cool as hell...ROBERT PLANT is always great to sing with. He's a very sexy man and he knows it haha...Then...LOU REED was very cool to work with, I enjoyed singing with him very much. RONNIE WOOD, my God he's great to sing with, he has so much energy and charisma. Most of them are...BONO's a very cool guy...I mean, all of them are cool.
TELL US MORE ABOUT THE OTHER GUYS IN YOUR BAND...ARE THESE THE SAME PEOPLE YOU RECORDED THE ALBUM WITH?
No, no. The people who recorded the album, they were...T BONE BURNETT produced the album and he got his own guys in, who I met only on the day of recording, we had no rehearsals. It was MARC RIBOT on guitar, ZACH DAWES on bass and JAY BELLEROSE on drums - they're all amazing. I then got my own band for touring and I have to say that my guys are the coolest bunch of guys! Oh my gosh, they're amazing musicians and they're fantastic, they're so cool! And they look hot, they look absolutely hot!
WHAT WOULD THE SETLIST LOOK LIKE - DO YOU ONLY PLAY THE NEW RECORD OR THE... 'IT'SGOOD TO BE ALIVE' - 'JOHNNY GOT A BOOM BOOM' STUFF AS WELL?
I throw a few of the old songs in, but it's mostly the new album. I think that's quite normal - when you write a new album, you want to do that. It's not healthy to keep looking back, so I like to look forward and then when I write another album, I'll mostly want to do that. Of course I want to keep people happy, so I put the hits in from the other albums and everyone's happy.

WILL WE EVER SEE ON STAGE OR ON YOUR FUTURE RECORDS MORE OF YOUR PUNK SPIRIT?
I have no idea what comes next. My only plan is to have no plan. I'm sure it will come out - it's still inside me. I rock out almost every night on stage. I don't think the punk spirit ever leaves you, when I'm writing I don't have any rules and I think that gives me freedom.
THAT'S PROBABLY BECAUSE YOU'RE IRISH...
Maybe...But that's what punk is anyway - to have no rules.
YEAH, PERSONALLY I DO LOVE MORE YOU'RE NEW STYLE AND STYLING...BUT STILL - THE RETRO VINTAGE VIBE OF YOU EARLY RECORDS WAS VERY COOL TOO... IT HAD SOME 'PEAKY BLINDERS' SPIRIT....ACTUALLY - WHAT IS YOU FAVOURITE MOVIE OR TV SHOW?
Actually they're using one of my songs on 'Peaky Blinders' at the moment. From LIFE LOVE FLESH BLOOD - 'The Longing', it's one of the extra songs on the deluxe version. They use it on 'Peaky Blinders' every week, or every other week...
THAT STIILL DOESN'T MEAN IT'S YOUR FAVOURITE TV SHOW, OR DOES IT?
Oh, I love it! it's amazing! It's so cool that they're using one of my songs! I'm also watching 'The Last Man on Earth'. I find it so funny! That's my favourite tv show at the moment, 'The Last Man on Earth', it's just so hilarious.
YOU ARE A FANTASTIC LOOKING AND OBVIOUSLY VERY PASSIONATE WOMEN - IT'S BEEN SAID A LOT ABOUT THE HARASSMENT IN THE MOVIE BUSINESS...BUT WE DO NOT HERE THAT MUCH STORIES LIKE THESE IN THE MUSIC BUISNESS? WHY?
Oh God, I don't know...For me, the music business has been really good. I haven't been harassed. I don't work for anybody else, I'm my own boss. I have my own band, my business, I'm the boss of my own thing, so I'm fine. I think if you work for somebody else then maybe it's different...But all the guys I work with are really cool, they're really respectful to me and me to them.

However, the sexism I get is from people questioning my abilities or my intelligence, which is really bad and it's not from the people I work with, but more from journalists who ask me "Oh, do you really write your songs?" or "Who helps you write your songs?". I find that very insulting. The people I work with, we all respect each other's abilities and talent, no problem. But with journalists or people from the outside looking in, they cannot believe that I actually write my own songs, which is very insulting.

The other thing that I worry about is, I produced my own first two albums and I'm hoping to get into producing other people's albums. In fact, T BONE BURNETTwas encouraging me to do that, he said: "Why aren't you doing this, you produce well, why don't you produce for other people?"  And that's what I'm wondering - why are there not more female producers? But lately I'm starting to see more women in sound engineering and more women who are lighting technicians and I think that's wonderful!
I THINK ALL THESE SHITTY TV TALENT SHOWS GIVE THE WRONG IDEA ABOUT WHAT MUSIC IS ABOUT...
I think all the tv music competitions are more to do with tv that with music. Because for me music is art and I don't see art in those tv shows, they're entertaining and they're fun tv shows, but they're not art.

HAVE YOU EVER HAD ANY REGRETS CHOOSING MAY AS A LAST NAME EVER SINCE TERESA MAY STORMED INTO POWER?
Ah, haha, no, no, we're not related, that's all I can say. Whoever is dealing with Brexit has a difficult job, because it's probably one of the worst ideas that any government has ever decided to go along with.
YOU'RE IRISH BUT YOU LIVE AND WORK IN ENGLAND....HAVE YOU ALREADY CHECKED ALL THE CONSEQUENCES COMING YOUR WAY AFTER THE BREXIT THING?
I know! I may not be able to stay here, who knows...I've lived in England for 20 years now and Brexit makes people feel very unwelcome. And I pay my taxes here, I've contributed. Brexit is a terrible idea. In my heart and soul I'm Irish forever and I feel very insulted by the problems that Brexit is gonna cause in Northern Ireland again and everybody is very worried about that, because we've had peace for a while now, but this is gonna start up some bad times and everybody knows it.
IN A COUPLE OF DAYS YOU'LL BE DOING A SHOW IN ROME WITH JACK SAVORETTY - "FIRST TIME TO SING HEER" - YOU SAID ON FACEBOOK - AND YOU ALSO SAID - "FIRST VISIT I GOT KISSED BY POPE JOHN PAUL II. NOT JOKING!) WHAT'S THAT STORY ABOUT THE POPE?
When I was about 8 years old, my parents, my father used to take us camping all over the world, and we camped around Italy, so they took us to see the Pope. We were in the square and he stopped the car, he leaned in, he picked me out of the audience and he kissed me on the cheek and handed me back to my parents. Yeah, it was quite unusual.

HAVE YOU BEEN TO BULGARIA BEFORE?
No, I've never been to Bulgaria and I'm really looking forward to it. I've wanted to go for a long time, I've had friends go and they said it was amazing. I'm really looking forward to it. I've seen pictures of the theatre where I'm going to be singing and it looks stunning.
WHAT IS THE FIRST TING THAT COMES TO YOUR MIND WHEN YOU HERE THE NAME BULGARIA?
Warm people. The only Bulgarians I've met were warm and reminded me of Irish with the passion they had.
WE OBVIOUSLY LIVE IN A FUCKED UP WORLD - DO YOU BELIEVE MUSIC CAN SAVE IT?
I certainly believe music can help. I think music is a good way of getting in touch with your emotions. Most musicians that I know and people involved in music, are very creative and open minded people. I believe in people and humanity. When you go to a concert and see people forget their troubles, or forget what neighbour they don't want to speak to or whatever, and there's so much love in the room or theatre when everyone's together. Music can bring a lot of love and joy and you see at a lot of charity concerts that people are there to raise money for people who need it most. I think that music is really good at bringing us all together and music can only be a good thing!
LISTEN HERE
Source: RadioTangra.com
Tweet
Previous news: SURBAHAR - PAVEL STOYCHEV
Next news: 'AVENUE Q' - MILA LYUTZKANOVA