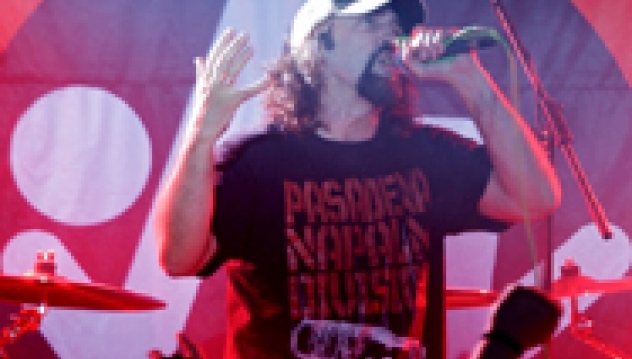 This yearвЂ™s Tangra Mega RockвЂ™s birthday celebrations started in a very refreshing manner- first it was a band which had never been in Bulgaria before and second, the gig took place in a very pleasant and comparatively unlnown place, never used for such purposes before.

This place called MIXTAPE 5 brought my faith back. Yes, itвЂ™s still possible here to go to a gig without being stuck somewhere behind a pillar or something and not being able to see anything except it plus you donвЂ™t need to inhale someoneвЂ™s vomit from the last week. ThatвЂ™s refreshing tooq but theВ  real surprise was still ahead of me. 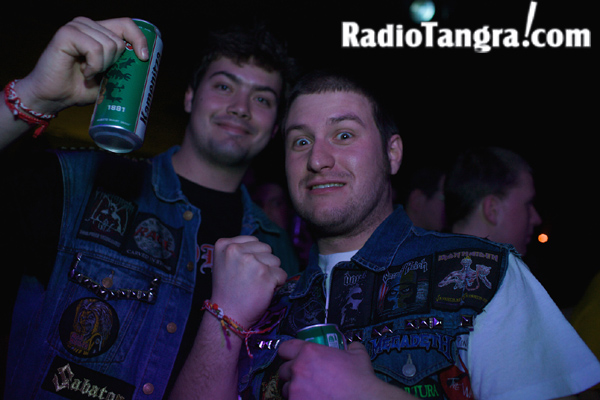 First thing first. D.R.IВ  got late bacause only two offices were working on the Bulgarian side of the Turkish-Bulgarian border. I guess those guys have already invented the 30 hour work week. Weird enough, the band were in great spirits.

Bass player HARALD went to the Chinese takeaway and got back to the club with a business card and a request to add the restaurant staff to the guest list. In the end we succeeded in saving the club from being invaded by little Chinese people who stink like there has been a massive spillage of soya sauce. Just kidding. 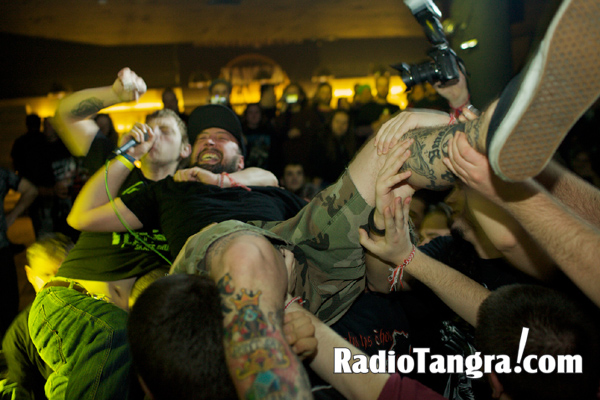 BROTHERS IN BLOODВ didnвЂ™t. They attacked the stage and executed a very spontaneous set. They had the attitude and the charisma. They were constantly moving accross the small space - not only SHUTTA but all of them, even SVEN who had lost someone very close in the same day. He looked tired and a bit distant but gave everything into the gig.

More than fine as it turned out in the nex couple of hours.В 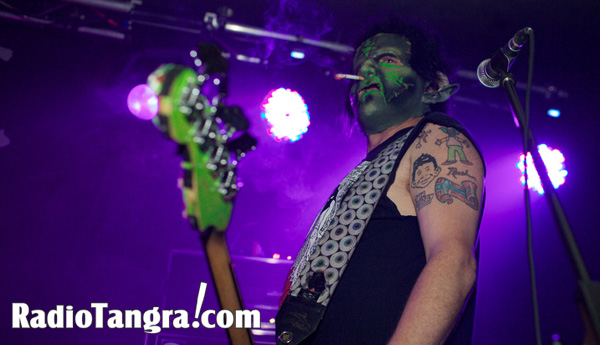 Despite the technical problems with SPIKE CASSIDYвЂ™s guitar ampВ and the frequent eruptions, now when IвЂ™m thinking back about this gig, it was like 2 minutes or something.

Even during the breaks HARALD never stopped cracking silly jokes like вЂњSpeak Bulgarian Or DieвЂќВ  and the Bulgarian word for вЂњCheersвЂќ, вЂњNazdraveвЂќ, which sounded a bit like вЂњNazdra-a-a-a...вЂќ. 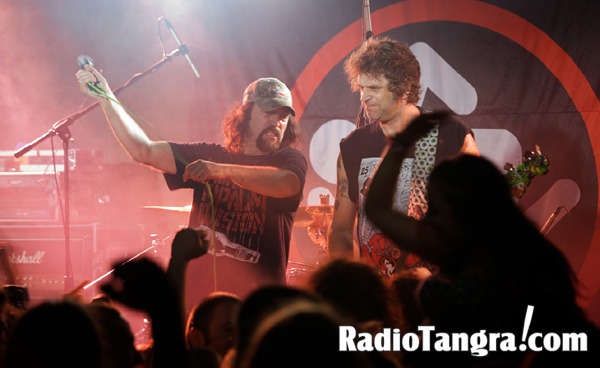 D.R.I.В promised 35 songs and shot them all to the last one i the chamber.

The crowd was boiling from the beginning to the end. Even during the breaks numerous boys and girls were stagediving, dancing and sweating. 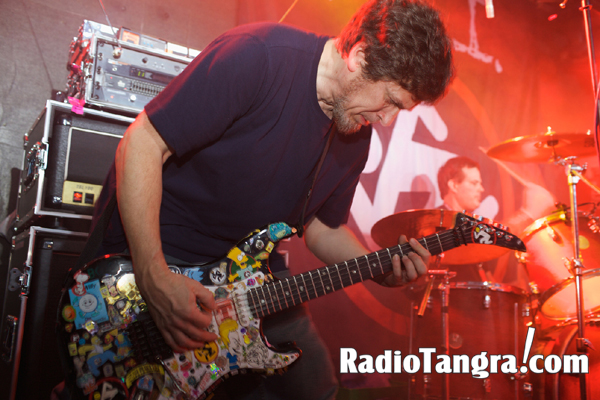 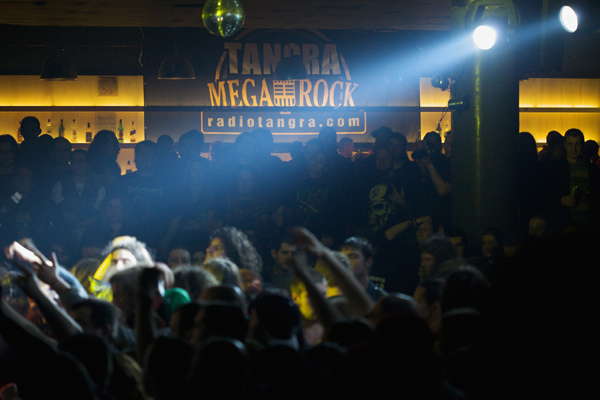 I guess the band were amazed themselves. I watched the gys only a few minths ago in Germany, on Persistence Tour and I was a bit disappointed by them comparing to what BLOOD FOR BLOOD, SOIA andВ  UNEARTH did that night. Well, tonight D.R.I. played a killer gig that was utterly fantastic. 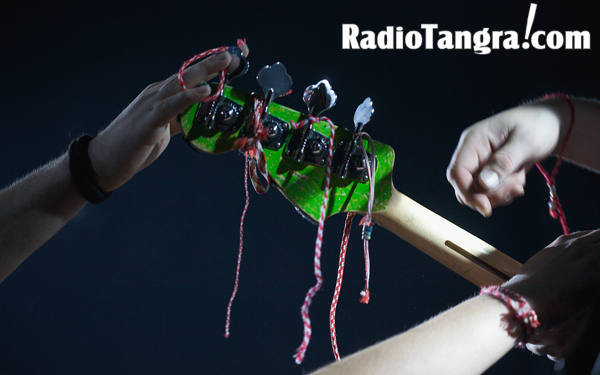 вЂњWe know the name of the band, thank youвЂќ- took the piss HARALD not guessing that the chants would not stop even after the concert. After the show SPIKE had to show up again to explain that they had playedВ  all they had and the gig was over. 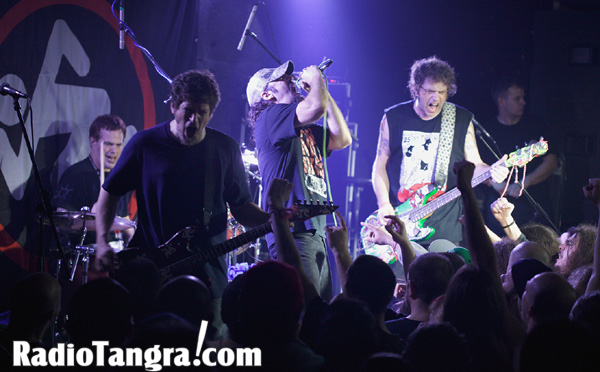 It was about the correct combination of people and attitude. There were four hunderd of a kind tonight and that was the key to success. This concert will definitely remain one of the best in 2011. 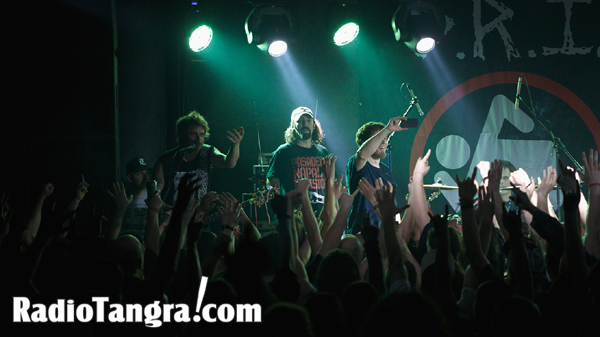 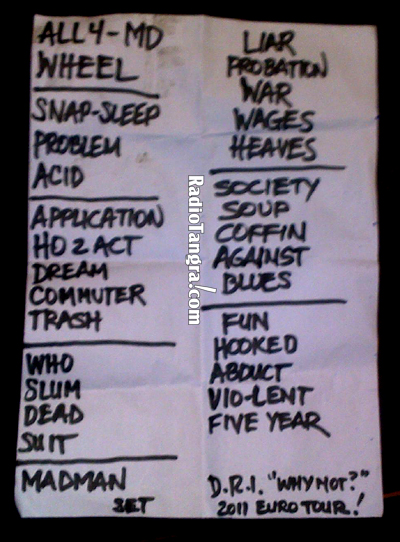