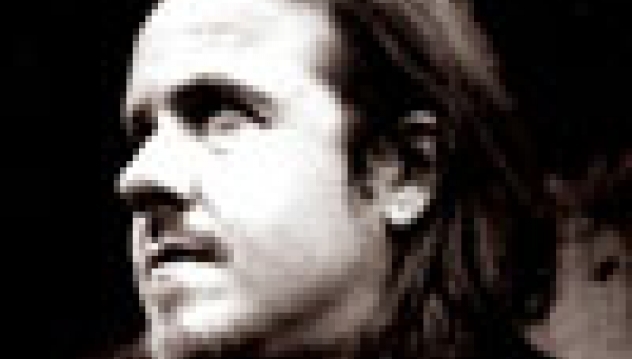 "Nobody in Fear Factory was interested in the music that I wrote, so I decided to save it for myself."

Vassil Varbanov: Burton, the idea to have you with us this time is this forthcoming debut album by Ascension of the Watchers. If you compare it to your very first EP that surfaced some two years and a half ago, where do you see the differences?

Burton C. Bell: I think it's mostly technical. The EP was originally meant to be a demo, se we recorded it as well as we could with the equipment that we had - just me and John recording all the parts. The initial concept and ideas of the songs were there, but technically it wasn't exactly the way I wanted it to be - I mean the actual sound and production quality. To me the idea is mostly the same, but now we have a better production quality, because we had more opportunities available to us.

V. V.: Many people link Ascension of the Watchers to Fear Factory immediately after hearing your name, but they get very, very surprised when listening to your new stuff. If your new album was for a movie, what would it be - a horror film? ItвЂ™s definitely not a comedy!

B. C. B.: Definitely not. I think it would be more of a psychological thriller. It's like a journey in the spirituality, very deep and dramatic.

V. V.: If we check the Internet, we can read that the idea to form Ascension of the Watchers came to you as a decision to come out of this vibrant concrete jungle out in the nature. Why? People normally do the opposite - they rush from the suburbs to the center of town. You're not that old to try to find some... what should I say...

B. C. B.: I've been through a lot in my life, you know - I'm gonna be 39 this year. If I stayed in LA, the Watchers record would have never happened. I had to leave and find myself in introspection - through journeys, travels and tribulations. This brought me all the way here with John. In the serenity, the solitude and the beauty of this place I'm really able to think, explore my feelings and emotions and relate them to music. And this is the type of music that's been in me for a long time. I've never written music for Fear Factory - I've only done vocals and lyrics. Nobody was interested in the music I wrote, so I decided to save it for myself.

V. V.: You spent quite a while there in Pennsylvania...

B. C. B.: Yeah, this time I ended up moving here. In the beginning I came here and I pretty much lived in the studio, which is in the middle of the woods - it's actually surrounded by 15 acres of woods and a beautiful landscape. I landed there and basically didn't leave. My heart king of never left as well.

B. C. B.: I'll say never say never, but at the moment Fear Factory does not have a record contract with a label, so there's no contractual obligation. I'm not worried about it and I'm focusing all my attention on Ascension of the Watchers.

V. V.: Do you plan touring with the Watchers?

B. C. B.: Yes. Right after the release of our record in February, we have 4 shows on the East Coast. Afterwards I'm going on tour with Ministry as a special guest artist. A Watchers tour is planned later on in the year through the USA, Europe and hopefully Australia.

V. V.: Why won't you come with Ministry in Europe?

B. C. B.: I haven't been invited. They just don't know whether they can afford to bring me in.

V. V.: However, you've gotten closer to that society than ever before - you sang on 3 songs on Ministry's last album, you'll play live with them in the States, the Watchers album is being released through Al Jourgensen's label...

B. C. B.: Yeah, I know it's fantastic! Believe me, I've talked to them about coming with them to Europe, but that's something they haven't thought yet. Right now this is not happening, but we'll see...

V. V.: Contrary to Ministry, Ascension of the Watchers is definitely not a political band, but a more universal one...

B. C. B.: Exactly, and that's one of the reasons why they really liked it - it adds a diversity and something different to their label. 13th Planet Records is a new label that wants to get bands they like. They just don't want to be strictly metal or industrial - they want to have the whole spectrum.

V. V.: Did you take drugs while recording "Numinosum"?

B. C. B.: Ha-ha-ha... I drank some beers and wines. Recording I was straight. Writing is another story... I drank a bit while I was recording so I could stay focused, but while writing most of the songs John and I would take a certain green substance. It just helps the process sometimes.

V. V.: Is there gonna be a video for any of the songs?

B. C. B.: I'm glad you asked. We're finishing up a video right now - it's for the song "Residual Presence". My friend Edu Mussi, who's the newest guitar player of the Watchers, is Brazilian. He has a friend called Victor Hugo who is an animator. He had just finished an animated movie called "Icarus", and he loved "Residual Presence", but it would have been too expensive to animate a brand-new full-length video, so he took parts from "Icarus" that actually fit very well with the song and its lyrics.

V. V.: Having in mind your career with Fear Factory and your various guest appearances with Ministry, G//Z/R, etc., do you expect lots of people to start cueing asking you to sing on their records now?

B. C. B.: Time will tell. I usually don't think about things like that. If they come and I like the band, I'd definitely take up some extra-curricular options.

V. V.: By the way, is it true what they write in the Wikipedia - that you shop up in Nirvana's video for "Smells Like Teen Spirit"?

B. C. B.: Yes, I did participate in this Nirvana video - the first one for "Nevermind". This was some 16 years ago... Back then I was listening to SubPop bands and industrial music and I was a huge fan of Nirvana back in the "Bleach" days - I saw them so many times... and the last time I saw them was this particular show they played before "Nevermind" came out, when they were handing out flyers saying, "Come down tomorrow to hang out and shoot a video with us!" So me and a couple of friends of mine went over and took part in the video. I can point myself four or five times in it.

V. V.: Are there any of the other guys in the crowd who became famous rock singers like you?

B. C. B.: I don't know... There was nobody else from Fear Factory, although we already were around at that time - we had just started... but there might have been some other LA band members there.