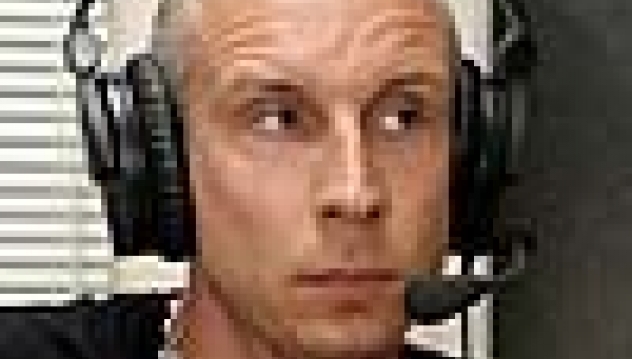 CLAWFINGER will be co-headliningВ the third and final night of the вЂSpirit of BurgasвЂ™ 2009 festival.

The latest album of CLAWFINGER was released 2 years ago through Nuclear Blast.

For the past, present and future of CLAWFINGER we are talking to frontmanВ Zak Tell - it's 11 a.m...

HOW ARE YOU THIS MORNING?
To be honest IвЂ™m pretty fucking tired. ItвЂ™s been a long weekend, soвЂ¦But IвЂ™m good, IвЂ™m good.

WHY A LONG WEEKEND? HAVE YOU GUYS BEEN PARTYING? OR PLAYING?
WeвЂ™ve been doing both. We played in Germany on Saturday and on Sunday we played the Woodstock festival in Poland, which is the biggest festival in Europe.

WHATвЂ™S NEW IN THE CLAWFINGER CAMP THEN?
HmmвЂ¦.thatвЂ™s a hard question to answer, but IвЂ™ll put it in a few words. WhatвЂ™s new is that weвЂ™re just trying to survive like all the other bands out there. The business is very different from what it was 15 years ago. You canвЂ™t survive only by being in a band these days, so weвЂ™re working and doing what we have to do to pay the rent and trying to find time for Clawfinger.

The only plan we have for a release at the moment is a remake of 'DEAF DUMB BLIND' for the 20th anniversary . The plan is to re-record all the songs from that album and bring in guests. WeвЂ™ve been talking to some of the guys from Rammstein and Peter Tagtgren from Pain & Hypocrisy. WeвЂ™ve made some friends through the years and hopefully we can get them to add their own flavourings and colourings to those old tracks.

SO YOUвЂ™RE GOING TO COMPLETELY RE-RECORD THE SONGS?
Yes. Because next year is the 20th anniversary since we started the band, soвЂ¦itвЂ™s a sort of celebration. I mean, we celebrate every time weвЂ™re out playing anyway. ItвЂ™s also like a special treat for the fans whoвЂ™ve stuck with us. It remains to be seen how it turns out, but if we can actually gather with these musician friends, then it can hopefully be something more than just a cheap remake that sounds more or less like the original. The plan is to make something a bit different.

I WAS JUST ABOUT TO ASK YOU ABOUT RAMMSTEIN. SEEING AS YOUR DRUMMER HENKA PLAYS IN RICHARD KRUSPEвЂ™S SIDE PROJECT EMIGRATE. ARE YOU FRIENDLY WITH THOSE GUYS?
We actually donвЂ™t have Henka with us anymore, but itвЂ™s true that he did play with Richard on his solo album. I donвЂ™t know how much you can actually know guys in other bands these days because all bands are busy doing their own thing.

What a lot of people donвЂ™t know, though,В  is that Rammstein supported us in 1995, when we were bigger and they were smaller. So weвЂ™ve known them since then, more or less. And of course they paid us back by letting us support them on their 2001 tour. I mean, there is some history there, weвЂ™ve done remixes for them and a bit of this and that, so there is some sort of connection, but itвЂ™s not as if we call each other every day and chit chat.

BACK WHEN YOU GUYS FIRST BROKE BIG, PEOPLE WERE CONSTANTLY COMPARING YOU TO RAGE AGAINST THE MACHINE, SAYING THAT YOU WERE BOTH FEISTY, BELLIGERENT, POLITICAL BANDS, WHOSE MUSIC CONTAINED ELEMENTS OF ROCK, RAP, METAL AND EVEN FUNKвЂ¦.
Well, I understand where thatвЂ™s coming from, but to be honest I donвЂ™t hear a lot of similarities. I mean, heвЂ™s called Zack and IвЂ™m Zak, he raps and so do I, but beyond that what they do is funky blues metal riffs with a much more overtly political stance to the whole thing, whereas weвЂ™re moreвЂ¦weвЂ™re more square if you likeвЂ¦and more German, more sort of вЂњmarchвЂќ music. ThereвЂ™s not a whole lot of funk in our music.

My lyrics are maybe slightly more personal than his, his are more sort of a Che Guevara approach. I mean, I take it as a compliment, I donвЂ™t have a problem with it, but I really donвЂ™t see us as being very similar to each other. IвЂ™ve heard us compared loads of times and it doesnвЂ™t bother me, but I just never understood it that much.

SPEAKING OF POLITICAL, WE ALL REMEMBER 2003 WHEN YOUR SONG вЂњSTEP ASIDEвЂќ CAUSED A BIT OF AN UPROAR IN THE STATES WITH ITS ANTI-BUSH STANCEвЂ¦.HOW WOULD YOU COMMENT THE CURRENT POLITICAL STATE OF AFFAIRS AROUND THE WORLD?
Well politics are politics, whatвЂ™s there to say? ThereвЂ™s a reason the word rhymes with polytricks as well. Otherwise thatвЂ™s a big question! IвЂ™m not saying that we never were political, but I guess it was much more from a personal point of view and much more from a point of view where youвЂ™re looking at whatвЂ™s going on and making a commentary on it.

IвЂ™ve never claimed to be left wing or right wingвЂ¦IвЂ™d lose a political debate within minutes if I was to talk to someone who knew their shit. IвЂ™ve always gone more with common sense and feelings and my gut telling me whatвЂ™s right and wrong, good and bad. Of course I make comments about homophobia and racism and all those things, cause theyвЂ™re things that should concern any sane human being that has feelings. 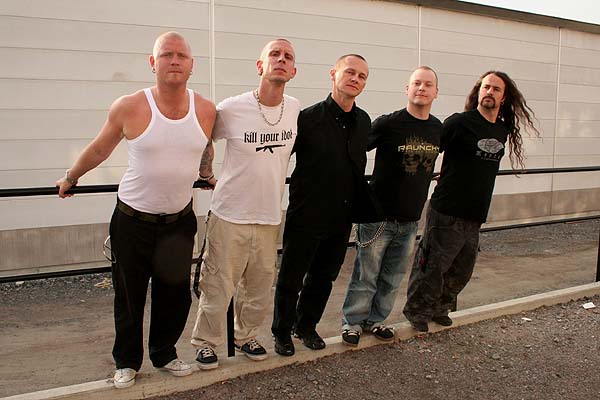 YOU GUYS ARE PLAYING ON THE THIRD DAY OF SPIRIT OF BURGAS, WHILE FAITH NO MORE ARE HEADLINING THE FIRST NIGHT.
Yeah I saw that, itвЂ™s a bummer that weвЂ™re not on the same day. We saw Faith No More about a month ago at one of SwedenвЂ™s biggest festivals.

WHEN WE TOLD THEIR BASS PLAYER BILLY GOULD THAT YOUвЂ™D BE PLAYING IN BURGAS TOO, HE SAID: вЂњCOOL, I LIKE THOSE GUYS.вЂќ
We hooked up with them ever so briefly at this festival, cause Billy was the one who actually put us on the guest list. We played Monsters of Rock with them in 1995, in South America. I mean, once again, itвЂ™s not as if we chat with each other every day. Our keyboard player got in touch with Billy through Facebook and he said heвЂ™d put us on the guest list, no problem. It was a fantastic gig by the way, completely fantastic. TheyвЂ™ve still got it., definitely still got it.

CLAWFINGER IS ON THE SAME BILL AS THE CRYSTAL METHOD IN BURGASвЂ¦
I remember them. I have one album of theirs, I think it was called VEGAS. I really love that album. ThereвЂ™s one song in particular, called вЂњTrip Like I DoвЂќ, which I thought was fucking fantastic. I didnвЂ™t follow them after that, I sort of lost track вЂ“ thereвЂ™s so much good music to try and keep a track on, that you always lose something along the way.

CLAWFINGER HAS PLAYED AND TOURED WITH MANY FAMOUS ACTS. WHO WERE THE COOLEST?
I would have to say that the best guys were Alice In Chains. I remember very clearly before the first gig we did вЂ“ at Brixton Academy in London вЂ“ Jerry and Layne came into our dressing room and told us that if there was anything that we felt bad about, or that if we felt mistreated, then to let them know. They wanted to make sure that we felt comfortable and that we had a good time because they had experienced the opposite when they were supporting Van Halen.

They were exactly like Beavis and Butthead, but in a good way вЂ“ they just came into the dressing room and chilled and told us these things. That was our first ever European tour as a support, so that was very important for us. And then also the fact that we were all massive fans. When we got the call that weвЂ™d be supporting Alice In Chains on a European tour, we thought someone was pulling our leg. And it turned out to be true. They did amazing gigs, they were an amazing bandвЂ¦

TheyвЂ™re still an amazing band, but thereвЂ™s an important person missing as far as IвЂ™m concerned. I know theyвЂ™re back and theyвЂ™re probably still good. I havenвЂ™t heard any of the new stuff and what the new vocalist sounds like. But IвЂ™m old school and to me Alice in Chains were with Layne Staley. I know that makes me an old fart, but IвЂ™ll have to accept that and live with it. 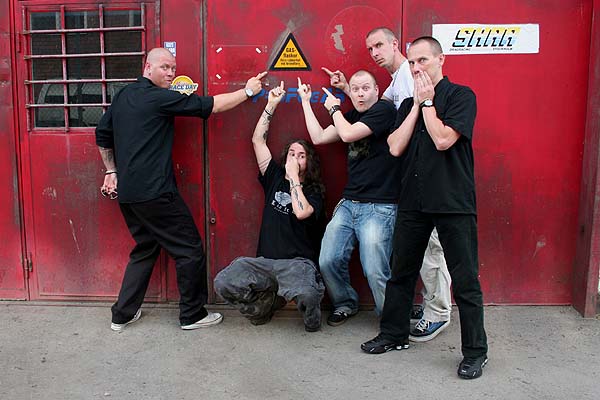 SO WILL YOU GUYS BE PLAYING ANY OLD CHESTNUTS AT THE GIG? AND HOW ABOUT NEW SONGS?
We donвЂ™t have anything completely new to play. The latestВ  we have is from the 'LIFE WILL KILL YOU' album (2007). So thatвЂ™s as new, as itвЂ™s gonna be. Beyond that of course weвЂ™ll play a mixture of all the albums. WeвЂ™ve been going for 20 years and the first album was way back in 93вЂ™ but that doesnвЂ™t mean we never play вЂNiggerвЂ™ or вЂTruthвЂ™ or any of those songs вЂ“ theyвЂ™re classic for their time.

AND PEOPLE GO MENTAL WHEN YOU PLAY THEM.
ThatвЂ™s why we still enjoy them вЂ“ because when the adrenalin sets in and people are having a good time, it doesnвЂ™t matter if youвЂ™ve played this song a 1000 times. I mean, we wrote the fucking song. We donвЂ™t ban songs from the setlist just because weвЂ™re tired of them. Of course we swap them about and maybe they donвЂ™t give us the same kick as quickly, but once you see the whole picture and youвЂ™re onstage and youвЂ™re having a good time, then everything just makes sense.

OK, THANKS FOR TALKING TO US AND WEвЂ™LL SEE YOU IN BURGAS.
Thank you, no problem. WeвЂ™re looking forward to it. WeвЂ™ll just make sure we have a big party onstage, together with the audience вЂ“ thatвЂ™s the whole masterplan. IвЂ™m pretty sure everyone will have a good time. ItвЂ™s not rocket science, itвЂ™s just rockвЂ™nвЂ™roll!