TARJA TURUNEN and MIKE TERRANA - Beauty And The Beat in Sofia 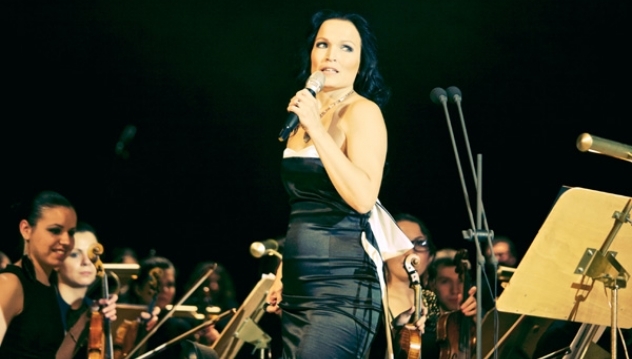 Beauty and the Beat is the type of show you would take your mother to. - Applies to mothers whose favourite TV channel is Mezzo and has informed you when you were in pre-school that The Beatles are a great band, for example.

I hope you follow my drift. If you don't – stop reading and turn on the “Planeta” channel, excuse my French.

It is quite amazing that the more cultured part of the Bulgarian people never gets bored with watching Tarja.

This is her sixth (?) concert here and Hall 1 of NDK, which has an official seating capacity of around 4000 people, is fairly full. In the stalls and the first balcony there is only the occasional empty seat, while the second balcony is nearly empty, with only the first few rows taken. The orchestra, clearly, has sold out a long time ago.

As it is to be expected from the format of this concert, the audience is far more varied than the usual fare at Tarja concerts, as there are an orchestra and a choir. This fact misleads a certain part of the audience, which has taken into their heads that the loud applause and whistling between the numbers is unacceptable. A bespectacled kid with a gamer's t-shirt turned around several times to share with us his intensive pensioner's disapproval and remarks that we were making too much noise, thus bothering his younger brother. Such a sad thing! - So young and already such old men.

The concert starts with a slight delay, which makes the audience clap in anticipation. We comment among ourselves that the orchestra at the Beauty and the Beat concert in Plovdiv two years ago was much larger, but this one is definitely younger.

Just like in Plovdiv, the concert starts with the overture of “Carmen” by Bizet, followed by Mike Terrana in a suit and tie, who plays a Bach concerto for oboe and violin. The audience sits quietly on the red plush seats and watches with interest as he plays around with the drumsticks. In the end it applauds with amusement. I hope that at least Tarja will get the usual ecstatic welcome, when she turns up onstage, led by Levon Manukian.

Yes – the audience stands up, applauds with enthusiasm and cheers with approval, but the ovations cannot be compared to the genuine joy and adoration, which brought Tarja to tears in Plovdiv. There are at least two logical explanations  - in Plovdiv such events happen relatively rarely and the people are a lot more enthusiastic; and only the most die-hard fans travelled from Sofia for this show. The other presumption is that tonight the audience mix was somewhat different. On one hand there were the fans of classical music who don't fancy weird drummers with blonde mohawks and screaming and whistling audience and on the other – the people with the black t-shirts who are bored by music with classical orchestra, a conductor and a choir.

Whatever the reason, however, I found the audience is not in its usual ecstasy. This does not mean that the concert was unpleasant. Quite on the contrary.

The setlist of the first part is identical with the one in 2011 – the first two performances by Tarja are “Blute Nur” by Johann Sebastian Bach and “Zueignung”  by Richard Strauss. Then Mike Terrana turns up again and AGAIN I decide the “Barber of Sevile” is by Mozart. It seems that the misconception was started by mom, who confirms that this is Mozart. Mozart or Rossini, it doesn't really matter – the overture sounds splendidly played by an orchestra and double bass drums. I tap my foot and shake my head. Then we get the already familiar number with Mike's upturned note sheets (not that he needs them or even looks at them) and Dvorak's “New World” and “Song To The Moon”, again by Dvorak. And AGAIN we argue if Tarja sings in Polish or Czech (as if we cannot check the Plovdiv setlist, but we haven't thought of it)

The first part of the concert ends with “The Reign”, which sounds stunningly good and invokes some excitement in the pretty rapt audience, a small part of which stubbornly ignored Tarja's plea not to flash and click with the phones and the cameras.

The lyrical mood continues after the break with an a capella performance of Queen's “You Take My Breath Away” by Tarja and the choir.

“Witch Hunt” was announced as a new song. How new? - It was new in Plovdiv as well.

Just as we are increasingly certain that the setlist will be absolutely the same as the time before (we had dug out the Plovdiv one), we get the first surprise of the evening. “A very great rock band”, as Tarja puts it. Mentally I raise an eyebrow, thinking that this might be the mandatory whatever Nightwish song and wondering since when the “very great rock band” definition applied to them.

Led Zeppelin ARE, beyond any doubt, “a very great rock band”. That part of the audience, which is more on the rock side, finally takes over and the first loud cheers, clapping and feet stomping start with the first bars of “Kashmir”. It flows into “Immigrant Song”, a tiny bit of “Thank You”, “Stairway to Heaven” (well, of course) and again “Kashmir”. As a general rule Tarja's rock covers don't turn out so well, but the Led Zeppelin medley is wonderful and livens up the things a bit.

Offenbach's “Cancan” with Mike behind the drums sends us back into the more classical music, while the bespectacled kid in the front row turns around and scolds us to stop whistling, because we were making too much noise. Well, it tends to be noisy at concerts, you know.

The second surprise of the evening is the sensational news that Mike actually can sing no worse than Frank Sinatra – “Fly Me To The Moon”, while Tarja definitely has a certain idea of how to play the drums. The official part of the concert ends with a song off the new album - “Into the Sun”.

The encores bring the long-awaited moment when the audience can finally stop enjoying the music and start filming videos of dubious quality for YouTube and mirky pics from the second balcony for the Facebook friends. - Going to concerts is otherwise a pointless exercise.

The hall turns into a mini electrical storm full of shutter clicks and autofocus beeps and pretty much no one is paying attention to the proceedings on the stage. And there Tarja sings  „I feel pretty, oh so pretty, I feel pretty and witty and gay...“ from “Westside Story” and dances around. Mike Terrana turns up with a white wig, a satin jacket over a shirt with lace on the collar and the sleeves. Oh, there is Mozart at last! - “Eine Kleine Nachtmusik”.

The show ends with “I Walk Alone”. Everyone is on their feet – clapping, cheering and whistling. Fans bring bouquets and flowers, several girls give Tarja a Bulgarian flag with something written on it. Someone sitting in the orchestra finally raises the horns.

The house lights are up, but the orchestra is still in their place. Maybe there will be another surprise and the applause doesn't stop. Finally the choir leaves, the musicians also go and the audience makes for the doors.