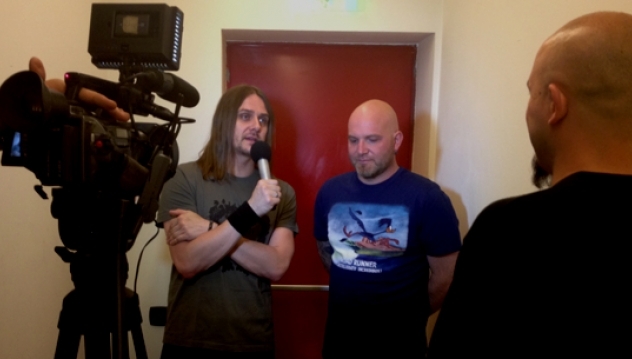 After two splendid Sofia gigs (in 2010 for Tangra Mega Rock’s fourth birthday and exactly one year later for the independent media’s fifth birthday celebration) it is hard to find the right words with which to describe truthfully what happened, let alone be able to distance oneself from the storm of emotions that marked the night of May 27th.

Big words come to mind. Not only to us but to all friends and fans making their way out of the Polish proggers’ third gig here.

Simply because with each visit Riverside boldly underline the fact – they’ve become one of Europe’s leading prog acts. And that’s quite an achievement in itselfbecause this is the birthplace and Holy Land of true progressive rock and thus – the most competitive space for any prog band.

Still Mariusz Duda and bandmates march on with a steady step, going from victory to victory, being absolutely flawless. When they were for their first concert their best work was ‘Anno Domini High Definition’ (though we did enjoy both ‘Rapid Eye Movement’ and ‘Second Life Syndrome’), in 2011 we were concentrated on the Memories in My Head’ EP and now it was time for the live presentation of the less metal and more rocking (still proggy, of course) ‘Shrine of New Generation Slaves’.

This is the type of rapid progress they’ve achieved – for some ten years, Riverside have reached the Premier League of prog rock and their concerts here can only be compared to prog champions Opeth’s.

And that’s not an unlikely comparison. Last time we saw Mikael Åkerfeldt present his latest ouput ‘Heritage’ – a musical bow before the glorious English scene of the 60s and 70s. Riverside’s ‘Shrine of New Generation Slaves’ has a lot to do with the latest Opeth and this is evident while listening to the album and when hearing the tracks live.

Still, we shouldn’t make the comparison too close – Riverside are like but at the same time – very much unlike Opeth. One thing is the same in both bands though – the sound perfection, the concept rock magic. And that’s what we experienced on May 27th in Sofia Live Club.

The Poles have arrived with a ton of equipment. And while some may think it much or even unnecessary, we soon find how important all of this is for their near perfect sound, the kind of splendid live performance that is easy and pleasant to experience and so hard to write about.

The closing ‘Celebrity Touch’ is an interesting event in itself – it’s not often that a track from an album just a few months old becomes of fan favourite. Apart from the ‘SoNGS’, there are splendid older tracks like ‘Egoist Hedonist’ and the great ‘Living in the Past’ and even people that aren’t that well acquainted with the band are left with the mighty impression of a brilliant concert.

And because Riverside are here so often, we wish ourselves another Riverside gig in a year or so. Alongside, let’s say, Steven Wilson. It will be a splendid thing to see, won’t it, fellow proggers?