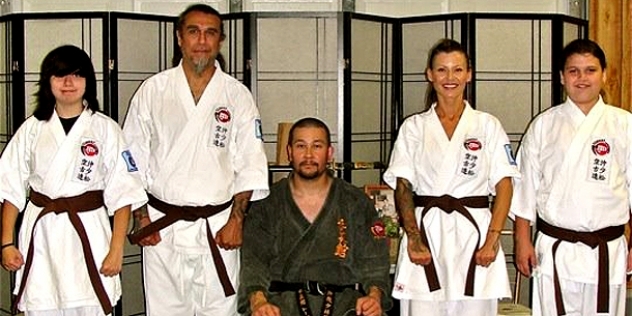 This is the SLAYER WEEK on radio TANGRA MEGA ROCK.

And the International Day Of Slayer is taking place for the seventh time TODAY, June 6, having started on 06/06/06 (when else would it have started, right?).

This year, the event organisers are asking people to join together in their celebration of Slayer-ness by marking the recent passing of the band's founding guitarist Jeff Hanneman.

"With the passing of Jeff Hanneman, it would be reasonable to assume that the 2013 celebration of the International Day of Slayer would be a somber one," said Hessian spokesperson and International Day of Slayer CEO Jim Tate, "but nothing could be further from the truth. This year more than any other demands full engagement and celebration from Slayer fans and hessians across the globe."

Tate adds: "Good music is heroic and ultimately immortal, and now more than ever, the music of Slayer is exactly that. They created the battle hymns that so many of us have used to navigate our lives, ones we will continue to rely upon to as the days ahead grow ever darker.

We cannot let these works fade with time. It is sometimes hard to remember that Slayer is comprised of mortal men like ourselves, but with the proper dedication and stewardship, their works can last a thousand years and join the ranks of masters like Beethoven and Wagner. This is what we must strive for by insisting on bands like Slayer for us and future generations."

To this end, IDoS have put together a handy four-point plan for how to celebrate the day, which runs:

Join the Facebook group here and, to get you started, here's something for full blasting: