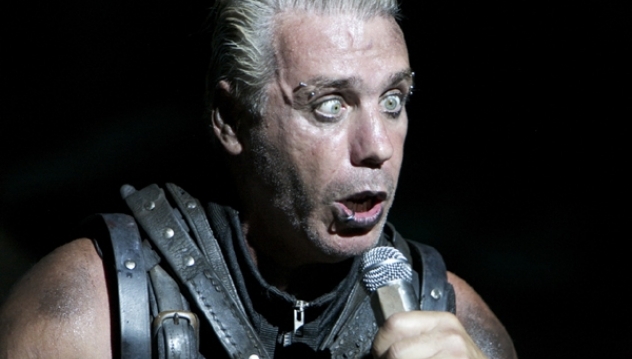 There are many bands that pick a certain quality of music and then take it to a new level. They could be going for the heaviest, fastest, most extreme or brutal sound ever, or putting an emphasis on technicality, progressive arrangements, epic songs and melodies – pretty much every truly great rock band has taken a single element of music and pushed it to the extreme.

For RAMMSTEIN this element is theatricality.

Just as around 15,000 fans were reminded during the fourth installment of the Sofia Rocks festival in the Bulgarian capital last Friday, this band's show is uncompromising.

Nothing is too much for RAMMSTEIN – from their enormous stage production to the plentiful use of pryro effects throughout the show. This is the symbiosis between rock and theater pushed to its absolute extreme in ways shock-rock pioneer Alice Cooper couldn't have imagined in his wildest dreams.

This is also the reason RAMMSTEIN are one of those bands that are always worth seeing live, even if you're not a very big fan of their music.

And it is kind of funny how the festival's organizers, Balkan Entertainment Company, still manage to piss people off, even though they have managed to organize a successful show by one of the biggest bands a metal fan could hope to see.

The news that SPINESHANK, previously announced as part of the lineup, will in fact not perform at the festival was communicated by the organizers in a manner, similar to a person farting in an elevator – avoiding the issue and ignoring all questions about it.

And even though the number of people who would pay to see this particular band is far lower than this of RAMMSTEIN fans, they still don't deserve such unfair treatment. If that happened last year, fans and media alike wouldn't have ever given the organizers a break – but currently, the bar of arrogance in Bulgaria is set so damn high, because to the criminal gang that has entrenched itself in the country's government these days, that no one is that impressed by a promoter's misdeeds.

Another thing no one is really impressed with is the fact that in the last moment openers Dorrn were taken off the bill and replaced by Lafrontera. (Dorrn's vocalist had been admitted in a hospital a day earlier, we hope she gets well.) A band with 600 Facebook fans is replaced by one that has 200. Who cares, really? The only question here is why this option was preferred over giving a chance to some local band, and there are plenty of decent ones around..

Most of the audience has a similar attitude towards the next band, Hamaton, as well. The difference is Hamatom do their best to change that.

Visually they resemble a poor man's Mushroomhead, musically – a mix of metalcore and nu-metal with lyrics in German. In a way they are what RAMMSTEIN could have been without their stage show. On the other hand, the energy and enthusiasm with which Hamatom perform their songs prove enough for the band to win over many people tonight. This is how you make the best of such a seemingly pointless festival appearance.

Nothing pointless about ENSLAVED, though! My perception could be distorted by the circles of people I communicate with, but pretty much everyone I speak with before and at the show says that the band from Norway is the highlight of the night's lineup. It couldn't be otherwise – there is a vast musical gap between ENSLAVED and the other bands on the bill.

While the rest of the performers tonight would rely on direct riffing and pure energy, ENSLAVED deliver progressive compositions stretched over eight or nine minutes, sounding like a black metal answer to Pink Floyd.

Because they are different their performance is met with mixed reactions by the audience, but it seems ENSLAVED have no problem with that.

“Our songs are long but they are also boring,” jokes frontman Grutle Kjellson. Quite the contrary if you ask me – there's nothing boring about having more than one riff and three words per song.

It is exactly the too long songs that BULLET FOR MY VALENTINE have tried to get rid of on their last album, 'Temper Temper.'

The appearance at Sofia Rocks is part of the band's tour in support for that  record, so songs like the title track and 'Breaking Point' dominate the setlist.

BULLET's performance though, is carried in a professional manner and is just as energetic as you could expect from a young band that is also experienced in touring at such a level.

They deliver a blend of polished neo-thrash/speed, meat and potatoes metal that relies on muscles alone – BULLET's stage production consists just of a backdrop with the cover of their last album and a few racks of amplifier heads.

This is a show that is driven entirely by the piercing, fast riffs, Matt Tuck's Hetfield-esque vocals and the Welsh band's ability to make use of the big stage, never standing at one place, moving around all the time. Things get almost uncontrollable during 'Scream Aim Fire,' before the band slows things down with closer 'Tears Don't Fall,' BULLET's biggest hit.

The pause between BULLET FOR MY VALENTINE and RAMMSTEIN proves to be long enough so the outside world could make its way into Vasil Levski Stadium and briefly interrupt the audience's heavy metal dream.

This is the moment when people start to chant “Ostavka!” [“Resignation!” in Bulgarian]. Yes. Just because we're at a concert instead of the streets of Sofia tonight, doesn't mean we've given up!

Minutes later the first fireworks of RAMMSTEIN's show have popped and the band is playing 'Ich tu dir weh,' as vocalist Till Lindemann descends from the very top of the stage, carried by a platform.

Right after that the German band brings us back to the very beginning of its career with 'Wollt ihr das bett in flammen sehen?' and gives an expected answer to the question asked in the title, setting fire to pretty much the whole stage – that looks like a set from the movie 'Iron Sky' by the way.

And now... if you listen to this music at home, it could seem totally uninteresting to you. And it is so because music is only half of what RAMMSTEIN are meant to deliver.

Combined with the band's stage show, the sharp riffs that get repeated endlessly over a marching rhythm manage to create a complete whole that is hard to deny. And the show itself is like perverse pyro-theater, packed with testosterone and cynicism .

The people on stage seem more like actors than musicians – every song goes with a certain script, choreography or a scene that RAMMSTEIN have to perform.

This is also amplified by the fact that there is actually no communication with the crowd.

In front of RAMMSTEIN we're merely viewers, watching as they go from song into song without any talking in between.

Lindemann finally speaks not long before the end of the band's two hour set, quelling all doubt that the musicians may just easily not be playing their instruments at all – “Ratzete gore” [“Put your hands up” in Bulgarian].

Shortly after comes one of the unexpected, but definitely greatest moments of the show – a minimalistic performance of 'Mein Herz brennt' only by a piano and vocals.

Surprisingly beautiful! 'Sonne' follows as well as the grand final with 'Pussy,' during which a cannon ejaculates a huge cloud of confetti into the air. Every one watches with a mix of ecstasy and inability to process what they have just seen.

This is exactly the idea. RAMMSTEIN's show is an experience that swallows you whole, chews you around and spits you out totally confused.