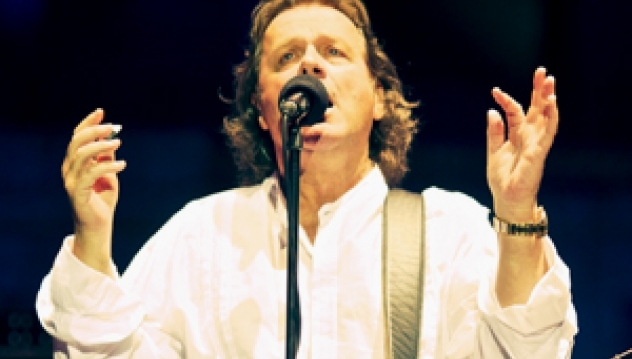 Legendary ASIA will play a special show at the Roman theater in Plovdiv, Bulgaria.

And it will be filmed for the band's next official DVD.

On some of the songs, ASIA will be joined by The Plovdiv Philharmonic orchestra, conducted by Levon Manukian .

So, we have more than just one reason to talk to JOHN WETTON (lead vocal and bass).

IT IS EXCITING TO BE WITH YOU NOW HERE ON THE RADIO, SO PLEASE, TELL US ABOUT THIS FORTHCOMING ALBUM OF ASIA….

Well, we don’t know what it’s called yet. It was called 'Valkyrie', but I think we might be changing that. We’re in the studio at the moment and…we’ve been on the road, actually.

And then we take a break and come and see you on Thursday, rehearse on Friday and play on Saturday

YEAH, YOU ARE PLAYING AT THE ROMAN THEATER AND THERE IS A POSTING ON YOUR WEBSITE, FULL OF ENTHUSIASM. WHY’S THAT?

I really enjoyed the last time we played in Bulgaria and I'm looking forward to come back and play there. We played in Sofia last, about three years ago.

Yes, that’s it, four years ago, ha-ha. Well it was great there, a really really good audience and I am looking forward coming back to Bulgaria. Particularly that setting looks great; the old Roman amphitheatre looks perfect.

And playing with an orchestra there….yeah, good stuff.

HAVE YOU EVER PLAYED WITH AN ORCHESTRA WITH ASIA BEFORE?

We’ve had an orchestra on a record – on ‘Astra’ (1985). It was Louis Clark and the London Symphony Orchestra and they played on 'Rock and Roll Dream'.

And they were doing fabulous, so I always thought that ASIA was meant to be with an orchestra.

YOU ARE GOING TO PLAY SIX SONGS WITH THE ORCHESTRA IN PLOVDIV.  WHO WAS THE ONE TO CHOOSE WHICH SONGS?

One song will be an acoustic song ….It will be the obvious ones – ‘Heat of The Moment’, ‘Only Time Will Tell’, ‘Don’t Cry’, ‘Sole Survivor’, ‘Wildest Dreams’ and one surprise song which would be ‘Heroine’ from 'Phoenix' (2008).

WELL, ‘HEAT OF THE MOMENT’ HAS BECOME THE SYMBOL OF ASIA…AREN’T YOU FED UP OF PLAYING THIS SONG ALL THE TIME?

No, this song has been very kind to me. You now, to have a big big hit like that is a double edge sword. It got us the exposure in the first place to have a number one record in America and around the world. And we can’t complain now if people want to hear it.

I think the group will be playing ‘Heat of The Moment’ until the group plays its last concert. But in a way it’s a tribute to us that people still want to hear it.

Fed up of playing it? No. By the time we get to play ‘Heat of The Moment’, the concert is over. Everybody have fun.

I ASKED YOU THIS AS I AM NOW READING AGAIN THE AUTOBIOGRAPHY OF LEMMY OF MOTORHEAD WHO ‘S SAYING “FOR GOD SAKE, THEY ARE ASKINGME TO PLAY ‘THE ACE OF SPACE’ OVER AND OVER AGAIN AND I’VE DONE TWENTY FIVE MORE RECORDS AFTER”…..

Well, he only got to make these twenty five because of that one called ‘Ace of Spades’. I think it’s a privilege.

When people want to hear it, it’s a privilege to play it for them. I would be disappointed if I went to see one of my heroes and they didn’t play the song that I wanted to hear.

YOU HAVE A HUGE EXPERIENCE IN MUSIC. ACORDING TO YOU, HOW HAS THE ‘PROGRESSIVE ROCK IDEA’ PROGRESSED THROUGH THE YEARS?

Oh, I think it is a misnomer right now. Because when the movement first started, it was an amalgamation between rock and classical music. Really, that’s where it came from.

If you look at the early bands like KING CRIMSON, PROCUL HARUM, MOODY BLUES, JETHRO TULL and ELP, of course, GENESIS...it was a marriage between rock music, or rock ’n’ roll as we knew it then and classical music, somewhere on the line.

And it really was. Every album that I bought between 1969 and 1973 was a new adventure. I don’t know what was going to happen … I put the record on the turntable and I’ve been prepared to have my head blown off by the experimentation musical and aural in the way recording was getting better and better.

But it had to start all over again around about 1980-81. And it started in a different way, but people still called it ‘progressive’.

What happened to ASIA, what happened to GENESIS in the 1980s was very much NOT progressive. If you look at ASIA's first record, there’s a lot of progressive roots in there, but it really has a different kind of commercial feel.

The same with GENESIS in the 80s. It was very different from the GENESIS that started in the early 70s.

So, I think we have just hung the label ‘progressive’ on it, because of something that went before. I don’t think it’s truly representative of what music is now, but people don’t know what to call it. So they call it progressive.

OR, PROBABLY, BECAUSE THE SAME PEOPLE LIKE YOU AND GENESIS IN THE 80s WHERE PRETTY MUCH INVOLVED INTO WHAT USED TO BE CALLED ‘PROGRESSIVE’ IN THE 70s…?

And as far as technology is concerned.  You know, the sound of the records is still pretty safe. I don’t think it’s truly progressive. But, I don’t think that the press or the media knows what else to call it.

If I, like me, I’ve been involved in various progressive rock bands and they assume that I am a progressive rock musician. Yeah, I mean, a lot of people that I hang out around, that I work with are from that same genre. But I don’t think we are truly progressive anymore. People would call us ‘progressive’ because we come from a certain genre.

YOU MENTIONED THE MASSIVE SUCCESS YOU HAD WITH YOUR DEBUT ALBUM IN 1982 – ‘ASIA’. IT WAS THE BEST SELLER IN THE STATES, A PRETTY GOOD ACHEIVEMENT FOR A BRITISH BAND….

It was the best seller in the WORLD!

OK, BUT WAS IT PART OF THE PLAN, OR YOU DIDN’T KNOW IT WAS GOING TO HAPPEN?

No! Personally, I thought when we made the record, because of the way the musical climate was at that time, 1982, it would do about 300 000. Something like that. A little bit more than UK had sold four years previously.

But, it was the power of the singles and the power of MTV that just pushed it straight into the TOP 20. So, we were lucky, we hit a wave. When people were listening to the radio, back in 1982 it was all synthesizer pop. It was FLOCK OF SEAGULLS and HUMAN LEAGUE and stuff.

And suddenly, ASIA came on the radio and sounded really big! It sounded like serious music again. We caught the crest of a wave in 1982 and people just loved it. The video went very well on MTV and radio loved it. Wherever it was in the world, radio loved it.

I mean, I think part of the initial success was shock, because people said; “You hear these old farts, they got together and the formed a band. But listen to this!” ha ha.

And they would play ‘Heat of The Moment’ and then they play ’Only Time Will Tell’ – “Listen to this”! And then ‘Wildest Dreams’….The album was so deep with good songs. That was its strength.

FOR A NUMBER OF YEARS, YOU WERE NOT WORKING WITH ASIA…

WHAT WAS THE REASON FOR REUNITING THE ORIGINAL  LINE UP…? FINANCIAL REASONS OR PURE NOSTALGIA?

No. I think that if we do anything for financial reasons ever – it would fail. We had to do it for artistic reasons. And there was a big feeling among the four of us, that we had not finished what we sat out to do. It all got taken over by the business in 1982- 83 and then we split up.

We did another three records and the true reasons we split up this time was Steve (Howe) left as he could not continue to do two jobs – play with YES and play with ASIA. So, something had to go.

In fact, what he’s done was he’s done us a favor, because the band is sounding much stronger now. It’s a different kind of edge to the band with the guitar that Sam (Coulson) brings in to the group.

Yes, fresh blood, in deed and he’s giving the band quite a different energy. It’s really good.  The tour that we’ve just done in Europe was fabulous. The audiences absolutely loved it. Wonderful.

I TALKED TO GEOFF 9 YEARS AGO....AND ASKED HIM IF THE NAME ASIA WAS CHOSEN AS A RESPONSE TO THE SWEEDISH HITMAKERS OF EUROPE AND HE LAUGHEED AT ME, OF COURSE….

Ha ha, we went through hundreds of names as every new band does. And our manager said: ‘Heh, nobody wants to use the word ASIA’ and everyone went  -‘Urgh’.

Next day I came back and I said: ‘You know what? ASIA is really good’. It’s four letters, four people and it looks good, kind of, diametrically. Because of the two ‘A’s.

So, we’ve decided to give it to Roger Dean and see if he could come up with a logo. And the logo he came up with was fabulous. It’s the same one that we use today.

And then really, it was just the strength of the fact that it’s four letters – four people. Same as ABBA – same as the Swedish hit makers, but it was a kind of a rock version of that.

ARE YOU FOLLOWING THE CASE OF ROGER DEAN SUING THE AVATAR FILMMAKER?

Yes, I am. And I really hope he can get something out of it, but he’s up against and enormous corporation who have nothing better to do than to employ an entire flaw of lawyers.

When I saw the film, when I saw ‘Avatar’ I thought: ‘Wow, there’s an awful lot of Roger in here.’

The floating islands, the bridges…Certainly the animals and dragons that fly around look very very Roger. But, I don’t know how he can prove that sort of stuff.

THIS COULD BE THE THEFT OF THE CENTURY, HUH?

Absolutely. Roger could be moving into larger accommodation, ha ha. I wish him all the luck. Because he’s up against an awful hard-nosed bunch of lawyers.

I wish him all the best. I love Roger, he’s great.

A PERSONAL QUESTION...YOU ARE VEGAN...BECAUSE OF A HEALTH ISSUE OR A PHILOSOPHICAL CHOICE?

I am not vegan. Carl (Palmer) is vegan, I am vegetarian. And there is a little story about that. My son lives in Germany with his mother.

And he lives in Bavaria where they are very big in eating pig. I was there for his birthday and we sat down for a lunch in a restaurant and all they had to eat was pork. It was pig, pig, pig, pig or pig.

And I ordered some pig and when it arrived it had this enormous slice of fat on it. When I looked at it, something inside my body said – ‘We’re not going to do this anymore.’ And from that moment on, I haven’t eaten any meat.

I had a heart problem about six years ago and I am not supposed to eat too much animal fat. So it’s probably a good thing for me. It was a simple decision. It has nothing to do with ethics, any conscious or anything like that.