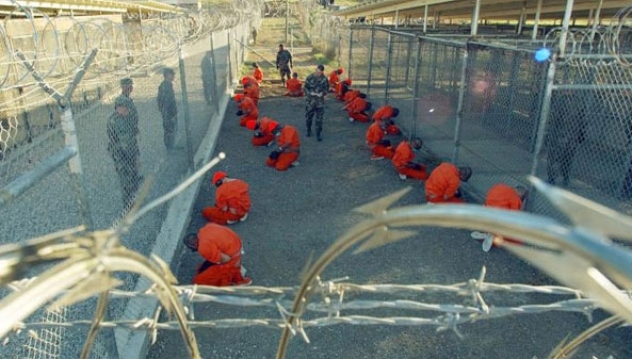 The Canadian electro-industrial rock act SKINNY PUPPY have sent a bill for $666,000 to the Pentagon in the USA over allegations that interrogators at Guantanamo Bay used their music as a form of torture.

Band co-founder cEvin Key said he learned of the alleged tactic from a fan and former guard at the detention centre who is writing a book about his experiences there.

'We sent them an invoice for our musical services considering they had gone ahead and used our music without our knowledge and used it as an actual weapon against people,' Key told CTV News.

'I am not only against the fact they are using our music to inflict damage on somebody else but they are doing it without anybody's permission.'

But the band are not entirely surprised that their songs were used as sonic punishment for Guantanamo detainees.

'We thought this would end up happening,' Key added. 'Because we make unsettling music, we can see it being used in this weird way. But it doesn't sit right with us.'

He went on to say that the revelation prompted the band to send a bill to the US Department of Defence for musical services rendered.

"We decided to come up with a figure that would be somewhat relevant to the evilness of the deed, so basically we've invoiced them for $666,000."

Originally formed in 1983, SKINNY PUPPY are currently on a lengthy North American tour to promote their current album, itself entitled 'Weapon' (released in the summer of 2013) and a 10th Anniversary reissue of 'The Greater Wrong Of The Right'. Both titles are available on Metropolis Records.

A stunning video recently made for the song 'illisiT' (from 'Weapon') can be viewed here: