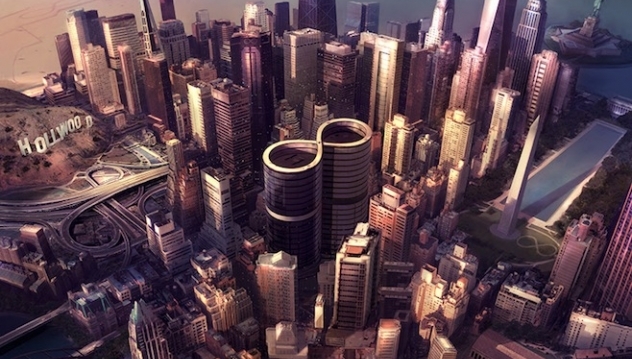 Dave Grohl is a smart man. He's well aware that it is the meaning and history that make music special – not just the polished, ready-for-radio three-minute songs. And with every Foo Fighters record he has outdone himself in his effort to bring subtext to his band's songs. Besides being a smart man, Grohl is also deeply in love with music. And with 'Sonic Highways' he has written a powerful, sincere love letter to it.

The album is only one part of that letter – the other is the eight-episode documentary on HBO about its creation. Every one of the eight songs on 'Sonic Highways' is recorded in a different American city, in a different legendary studio, and features a guest appearance by at least one legend from the local musical scene. The documentary itself is a project with an overwhelming scope. It wouldn't have been unexpected for the album to be a hastily assembled soundtrack for it.

But it's not. The starting point, both for the TV show and the album, is the love for music. And besides immersing themselves in places that are soaked with decades of rock and roll history, the Foo Fighters have also written what is probably their most ambitious and impressive collection of songs.

For about five minutes, opener 'Something from Nothing' (featuring a solo by Cheap Trick's Rick Nielesen) goes from a semi-ballad to a raging punk-rocker, moving through at least three variations of a hooky riff, which, as many Internet metalheads noted, resembles the one from Dio's 'Holy Diver.' 'What Did I Do?/God as My Witness' (featuring Texas blues wiz Gary Clark, Jr.) is practically two songs into one, tied together by a motif that is developed once as a punchy rock tune, and once as an introverted ballad.

Having written the word 'ballad' twice already I might give you the impression that the music in the album leans in that direction. And you'd be right. It is not that it lacks fast rockers – 'The Feast and the Famine' (featuring Pete Stahl and Skeeter Thompson from Washington, D.C. hardcore band Scream – Grohl's first band), 'Congregation' (with Zack Brown) and 'Outside' (with a solo by Joe Walsh!) are such songs and are all great. But it seems the album's peaks all come from its mellower side. So does its culmination as well –  closer 'I Am a River,' where you hear everything from spacy, echoing guitars, to grandiose strings, spilling over seven minutes of gradually gaining momentum towards a powerful chorus.

There's no way that you, as a listener, won't be touched bu all the love for music that 'Sonic Highways' is soaked in – as long as you feel the same way about it, of course. But it''s truly inspiring to see a man like Grohl who's working at such a high, honestly mainstream lever, continuing to do it for the right reasons.