RITCHIE BACKMORE Is Considering a Return to Rock 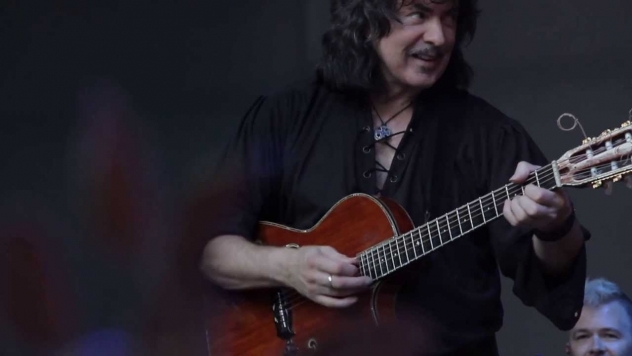 Nearly two decades after a switch to medieval folk, former Deep Purple and Rainbow co-founder Ritchie Blackmore says he might play rock again – but not for long.

“Just for a few days, next June,” Blackmore allows, in a new talk with the French newspaper Le Parisien.

“But for now, I’m not decided on the persons I want to work with. I’ve got a good idea about the ideal candidates, but it wouldn’t be fair to say anything now. I will know exactly in one month who I want to have in this band to play Deep Purple and Rainbow songs. We will probably play three or four shows in June; that’s all.”

Blackmore, now 70, broke up Rainbow in 1997 to form Blackmore’s Night with his wife Candice Night. Their 10 ren faire-styled studio efforts include this September’s All Our Yesterdays.

More recently, former bandmates in both groups have mentioned possible reunions. David Coverdale, who was with Blackmore in Deep Purple from 1973-75, says Whitesnake‘s current tribute album Purple grew out of failed plans to play with Blackmore again.

Meanwhile, Joe Lynn Turner – a member of Rainbow from 1980-84 and then Deep Purple from 1989-92 – has also talked about the possibility of collaborating again.

“I think that Joe will not be part of the adventure, and he doesn’t know it yet,” Blackmore counters. “He does his thing, I like him, and I made good albums and good songs with him, like “Street of Dreams’ (a 1983 Rainbow track that Blackmore’s Night later reworked). But I’m thinking about doing a mixture in the band, with famous people and not so famous ones. That’s my state of mind at the moment, and you’re the first person I talk to about it.”

Blackmore later surmised, presumably with a smile, that “there should be about three or four people who might be interested.”