JOE ELLIOTT's DOWN 'N' OUTZ: Lyric Video For 'This Is How We Roll' Title Track 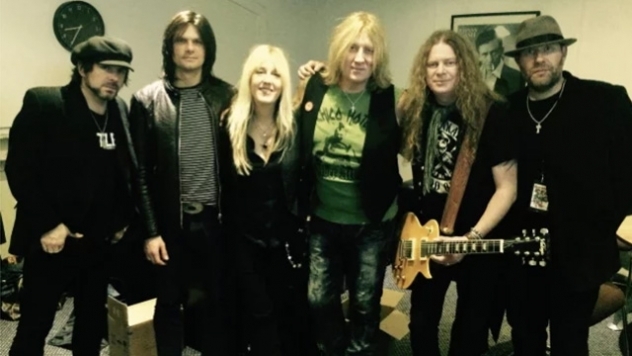 The official lyric video for "This Is How We Roll", the title track of the third studio album from DOWN 'N' OUTZ, the project headed up by DEF LEPPARD frontman and 2019 Rock And Roll Hall Of Fame inductee Joe Elliott, can be seen below. The disc will be released on October 11 via UMC.

The band, featuring THE QUIREBOYS' Paul Guerin (guitar), Guy Griffin (guitar) and Keith Weir (keyboards), plus Share Ross (bass, VIXEN) and Phil Martini (drums, WAYWARD SONS), takes a different approach on "This Is How We Roll" to its previous album.

This new album only features one cover version — THE TUBES' "White Punks On Dope" — alongside 11 original Elliott-penned tracks.
"This Is How We Roll" was produced by Joe Elliott with co-production by Ronan McHugh. The album was recorded at Joe Elliott's own studio Joe's Garage.
The album will be available on CD, LP, digitally and also on limited-edition 12-inch picture disc LP.
"This Is How We Roll" track listing:
01. Another Man's War
02. This Is How We Roll
03. Goodnight Mr. Jones
04. Creatures
05. Last Man Standing
06. Music Box
07. Boys Don't Cry
08. Walking To Babylon
09. Let It Shine
10. Music Box Reprise/Griff's Lament
11. White Punks On Dope
12. The Destruction Of Hideous Objects Part 3
Source: bravewords.com
Tweet
Previous news: Dr STIFFENSTEIN's NECRONOMICON SHOW is on TANGRA MEGA ROCK tonight
Next news: DEVILDRIVER Cancels shows After DEZ FAFARA's Wife Is Diagnosed With Cancer