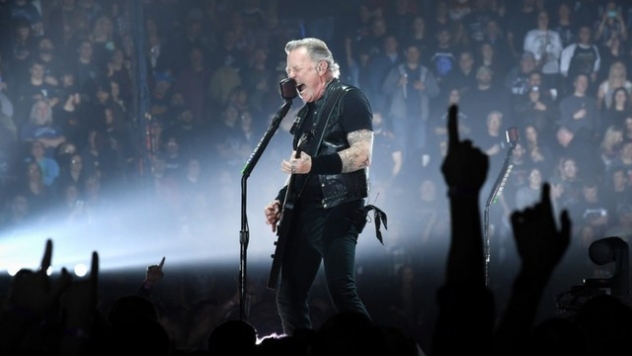 The idea of METALLICA playing together with a symphonic orchestra has always seemed great to me. The epic songs from their first four albums are already soaked with the influence that classical music has had on the late Cliff Burton – and the looser arrangements of the post-1991 material leave enough sonic space for an orchestra to fill and take the songs to the next level. The music just matches well. It is a matter of performance beyond that.
In the 90s, METALLICA were an undeniable force live, and the fusion with the, unfortunately, also late, composer Michael Kamen was so good that the CD with the original ‘S&M’ from 1999 rarely leaves my car’s audio player to this day.
Two decades later, METALLICA are a different band and their career is at the stage when the number of years hangs like a black cloud on the horizon. So, as I enter the theatre to watch the premiere of ‘S&M2’, the excitement I feel over the fact that the band will revisit one of its coolest musical creations is mixed with some anxiety about whether they will manage to pull it off as well as back then.
They have succeeded.
METALLICA have not only recreated and repeated the experience, but have actually built upon it.
On one hand, the band has cleared the dust from songs like ‘The Outlaw Torn’ and ‘No Leaf Clover', which, along with classics like ‘The Call of Ktulu’, ‘For Whom the Bell Tolls’ and ‘One’, are among the concert’s highlights again. On the other, they have included newer tracks like ‘The Day that Never Comes’, ‘Confusion’ and ‘Halo of Fire’.

The performances with the San Francisco Symphony, conducted by Edwin Outwater, are such that the songs could’ve fit right in on the original album.
The most interesting part comes after a short break in the middle. First, the tables turn and METALLICA play a classical piece with the orchestra – Alexandr Molosov’s ‘Iron Foundry’. Then comes the moment that makes my jaw hit the floor – a performance of ‘The Unforgiven III’ stripped of all guitars, drums and metal, and instead carried out just by the orchestra and the voice of James Hetfield. And yes, in 2019, that voice can carry a song. The orchestra’s resident bassist, Scott Pingel, then pays a magnificent tribute to Burton by performing ‘Anesthesia (Pulling Teeth)’ with some motifs from ‘To Live Is to Die’ mixed in. The rendition of ‘All within My Hands’ is also interesting – in line with the performance from the acoustic EP METALLICA released in February, but with added orchestration.
After this exciting middle part, ‘Wherever I May Roam’, ‘Master of Puppets’, ‘Nothing Else Matters’ and ‘Enter Sandman’ come out as something that is part-culmination, part-afterparty.
With ‘S&M2’, METALLICA prove that they are not only capable of keeping the fire of their legacy going, but are still able to create new moments of musical magic for their fans. If you are one of them, this concert will definitely excite you.
And I will soon have another CD for my car.
Source: RadioTangra.com
Tweet
Previous news: ALEX BOYADJIEV's PANIC ATTACK SHOW is TODAY - kicks off at 4 PM
Next news: ALBUM and FILM REVIEW - METALLICA - ‘S&M2’ (2019)