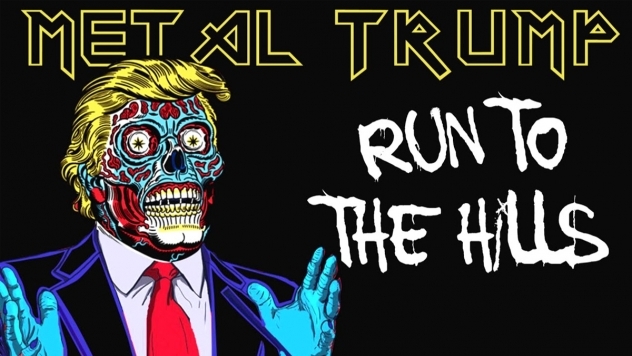 YouTuber Lars von Retriever has done it again! For his latest “Metal Trump” video, he has cut up the president’s dialogue to match the IRON MAIDEN classic “Run to the Hills” - and the results are frankly terrifying, albeit impressive.

IRON MAIDEN wrote “Run to the Hills” for 1982’s The Number of the Beast as a historical concept piece about the genocide of Native Americans and indigenous people by North American settlers.
The video thumbnail portrays Trump as one of the alien illuminati from John Carpenter’s dystopian sci-fi masterpiece They Live.
Source: consequenceofsound.net
Tweet
Previous news: MONY PANCHEV's ROCKENROLL radio show is today - kicks off at 4 pm
Next news: MOTORHEAD’s New ‘Ace of Spades’ Box Set Turns Into a Gambling Table