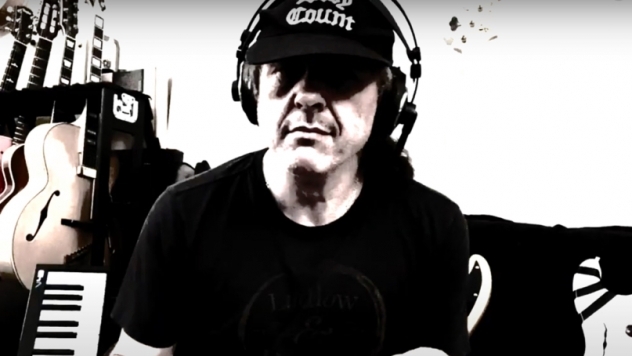 The thrash guitarist surprised everyone last month when he dropped the hilarious “Trump Sucks” rap - a homemade ditty with a clear and direct political message, given the impending November elections.
Consider this new track the B-side to “Trump Sucks”. Tragically, the basic safety measure of wearing a face covering during the pandemic has become a divisive political issue, with President Trump remaining defiantly apathetic toward mask regulations despite contracting COVID-19 himself.
Well, Skolnick is having none of that. He might not be the most gifted rapper, but that’s part of the satirical humor, as Skolnick himself admits.
In a world that makes no sense, Alex Skolnick rapping makes perfect sense. After all, he had first hand experience with the virus when TESTAMENT was on tour in Europe in March, prior to global lockdowns.
Many crew and high-profile band members involved with the tour package contracted the virus, including TESTAMENT singer Chuck Billy, SLAYER/EXODUS guitarist Gary Holt, and DEATH ANGEL drummer Will Carroll, who was in a coma before recovering.
Watch Skolnick delivering his latest rap below.
Source: consequenceofsound.net
Tweet
Previous news: EPICA Unleash 'Abyss Of Time' Video
Next news: MONY PANCHEV's ROCKENROLL radio show is today - kicks off at 4 pm