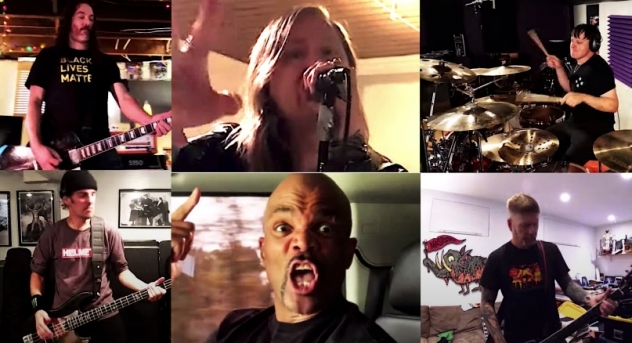 There has been a plethora of impressive all-star quarantine performances during the pandemic, but this latest one is especially ambitious. Thirteen musicians from bands such as REFUSED, MASTODON, KORN, RUN-DMC, ANTHRAX, FILTER, and more have joined forces to cover the FAITH NO MORE song “We Care a Lot”.

The collaboration was organized by SLAVES ON DOPE members Jason Rockman and Kevin Jardine, who contribute vocals and guitar to the performance, respectively.
Considering the amount of musicians, the mix and overall result is rock solid. The performance was organized to support the Roadie Relief effort, benefitting concert crew members who have been out of work in the midst of the pandemic.
“We Care a Lot” is the title track to FAITH NO MORE’s debut album, released in 1985, when Chuck Mosley was their singer. A funny moment comes at the very end of the all-star performance when FAITH NO MORE bassist Billy Gould makes an amusing appearance — but we won’t give the whole thing away.
Source: consequenceofsound.net
Tweet
Previous news: Miley Cyrus Is Working on a METALLICA Covers Album
Next news: MONY PANCHEV's ROCKENROLL radio show is today - kicks off at 4 pm