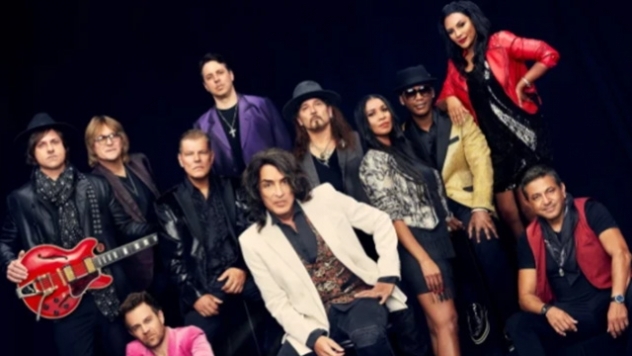 KISS co-founder and frontman Paul Stanley has spent the last few years developing a project close to his heart.

SOUL STATION is a band gathering some of today's leading musicians to pay tribute to the greatest artists and songs from the R&B and soul catalog to keep this vital music current.

"Now And Then" will be released March 5 on Universal Music Enterprises. The first single, "O-O-H Child" (THE FIVE STAIRSTEPS), can be streamed below.

"Long before I ever heard the great British bands, I grew up listening to Philly Soul, Motown and so much more," he said. "I was lucky to see Otis Redding and Solomon Burke among others. That music and its storytelling gave me strength and hope even in some tough days. The great classics of that era are magical medicine for most and I felt myself drawn back to that era for some sorcery I think we could all use."
Stanley's bandmembers include Rafael "Hoffa" Moreira (guitar and backing vocals), Sean Hurley (bass), Alex Alessandroni (musical director, keyboards), Ely Rise (keyboards), Eric Singer (drums and backing vocals), RayYslas (percussion), Gavyn Rhone (backing vocals), Crystal Starr (backing vocals) and Laurhan Beato (backing vocals) and Jon Pappenbrook (lead trumpet).
The band is augmented by three string players and two horn players of the same stature enabling SOUL STATION's wall of sound to be firmly rooted in the past while staking claim to both the present and future.
"Now And Then" track listing:
01. Could It Be I'm Falling In Love
02. I Do
03. I, Oh I
04. Ooo Baby Baby
05. O-O-H Child
06. Save Me (From You)
07. Just My Imagination (Running Away With Me)
08. Whenever You're Ready (I'm Here)
09. The Tracks Of My Tears
10. Let's Stay Together
11. La-La – Means I Love You
12. Lorelei
13. You Are Everything
14. Baby I Need Your Loving
Source: blabbermouth.net
Tweet
Previous news: RATM Release Killing in Thy Name Documentary About Race: Watch
Next news: See New Trailer For SERJ TANKIAN Documentary 'Truth To Power'