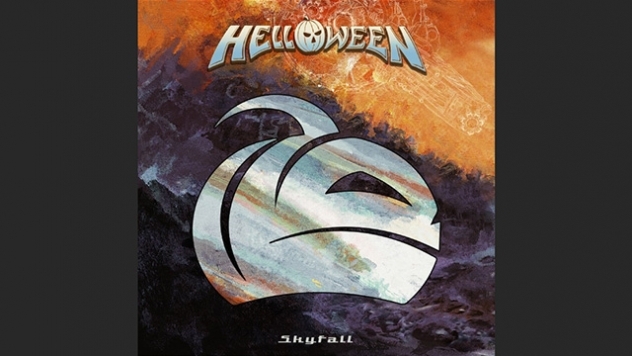 The official music video for the disc's first single, "Skyfall", can be seen below.

The cover artwork for "Helloween", which can be seen above, was painted by artist Eliran Kantor, who has previously worked with HATEBREED, SOULFLY, TESTAMENT, ICED EARTH and SODOM, among others.
The "Pumpkins United" lineup features returning singer Michael Kiske and guitarist/vocalist Kai Hansen alongside current singer Andi Deris, guitarists Michael Weikath and Sascha Gerstner, bassist Markus Grosskopf and drummer Daniel Löble.
Produced by Charlie Bauerfeind and Dennis Ward, the new HELLOWEEN LP was recorded in part at the H.O.M.E. Studios in Hamburg (where everything started in 1984). The same recording console used for such HELLOWEEN albums as "Master Of The Rings", "Time Of The Oath" and "Better Than Raw" was utilized to record the band's new material.
"Skyfall" begins with a bang. The epic track describes an alien landing on earth and a dramatic chase, while Kiske, Deris and Hansen duel with each other in a truly breathtaking manner. Produced by Martin Häusler, it is the most elaborate video clip in the history of the band. Portrayed via truly cinematic 3-D animation, this clip is a real high-end experience.
HELLOWEEN's new album saw the legendary German power metallers going "back to the roots," with the band recording fully analogue and Löble playing the drum kit previously used by HELLOWEEN's original drummer, the late Ingo Schwichtenberg, on the legendary "Keeper Of The Seven Keys" recordings.
Source: Nuclearblast.de
Tweet
Previous news: The ERIC CLAPTON week on radio TANGRA MEGA ROCK
Next news: Bulgarian band ELECTRIC GRAGON premieres first video from new album