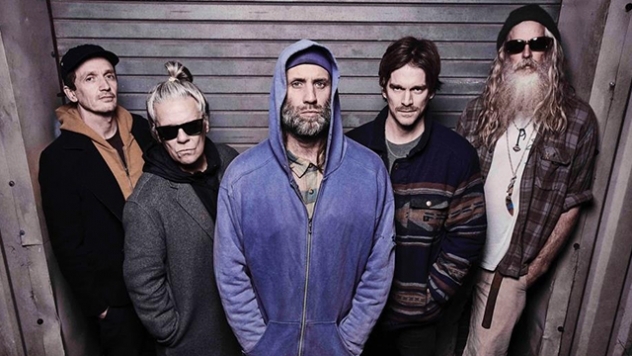 Following a run of outstanding summer festival appearances, Glastonbury rockers REEF announce the release of their new single “Shoot Me Your Ace”.

Produced by former DURAN DURAN / POWER STATION guitarist Andy Taylor, “Shoot Me Your Ace” is a joyful blast of raw soul-power, this no-holds-barred, uptempo rock’n’rollacoaster of a record is accompanied by a death-defying video shot in the middle of motorcycle stunt show Demon Dromes’ notorious Wall of Death.

Lead singer Gary Stringer comments: “As a rock song ‘Shoot Me Your Ace’ just works. It’s immediate. We opened with it at the festivals this summer and everyone gets it straight away. When you have a blinding rock song like this, you need an adrenaline-fuelled video, so to work with the folk at Demon Drome was spectacular. Their skill and bravery really adds to the excitement of the song”.
And what a song! Stringer’s signature raspy vocals soaring forward over Jack Bessant’s similarly infectious, driving bass. Add to this the dual guitars of Jesse Wood and producer/ honorary member Andy Taylor, alongside brand-new drummer Luke Bullen, formerly of Joe Strummer’s band THE MESCALEROS, and you have one powerhouse of a band.

This is re-energised REEF back where they belong with a track that totally encapsulates the spirit, energy and excitement of the band that we all fell in love with on albums such as Replenish and Glow. But it’s also REEF Mk II, a newly-crystallized line-up that brings together a remarkable array of talents who can justly lay claim to being a British national rock’n’roll treasure.
With a brand new album soon to be announced and a large number of Festival appearances across Europe to be announced for next summer including the already announced slots at Rockfest Barcelona & Gone Wild Fest UK, REEF are set to explode back into public consciousness with a bang!
Source: www.kinda.agency
Tweet
Previous news: ALEX BOYADJIEV's PANIC ATTACK SHOW is TODAY - kicks off at 4 PM
Next news: WHITESNAKE Announces New Bassist TANYA O'CALLAGHAN