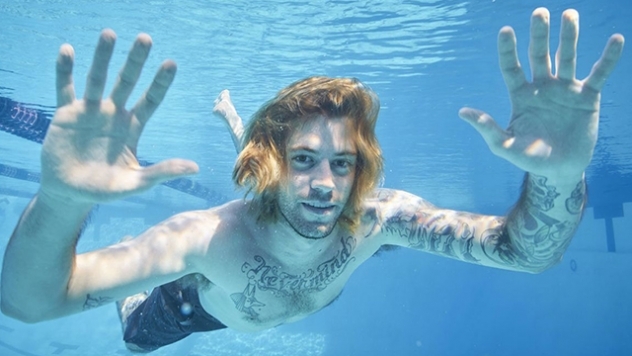 According to Rolling Stone, the man who claims he was the baby featured on the cover of NIRVANA's "Nevermind" album has refiled his lawsuit against the band, a little over a week after a judge dismissed his initial complaint.

Last August, Spencer Elden filed the lawsuit, alleging the photo of the baby reaching for a dollar in a swimming pool violated federal child pornography statutes and arguing child sexual exploitation. He also claimed the image on the cover was taken and used without his consent.
In last month's motion to dismiss, NIRVANA, as well as Kurt Cobain's widow, Courtney Love, had asked the court to throw out the lawsuit, saying Elden's claim that the photograph on the "Nevermind" cover is child pornography is "not serious" and insisting that his claim is "barred by the applicable statute of limitations." Federal child pornography law has a 10-year statute of limitations, beginning when a victim "reasonably discovers" the violation itself or the harm caused by it.
On January 3, Judge Fernando M. Olguin, who was presiding over the case at the U.S. District Court in Central California, dismissed the case after Elden missed his December 30 deadline to file an opposition to the defendants' motion to dismiss. However, Elden had the option to refile an amended lawsuit by January 13, which he has now done.
In the amended lawsuit, filed on Wednesday (January 12), Elden claims that NIRVANA "intentionally commercially marketed the child pornography depicting Spencer and leveraged the lascivious nature of his image to promote the 'Nevermind' album, the band, and NIRVANA's music, while earning, at a minimum, tens of millions of dollars in the aggregate."