Man Steals $6,500 Gibson Les Paul Guitar by Stuffing It Down His Pants 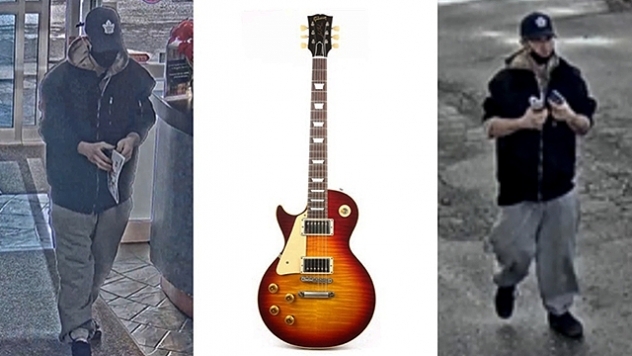 A man walked into a music shop in Canada and made off with a $6,500 Gibson Custom Shop 60th Anniversary ’59 Les Paul Standard guitar by stuffing it down his pants.

The theft happened on December 20th at a shop in Richmond Hill outside Toronto, but surveillance video was only released a few days ago. The footage shows the man, seated on a stool, placing the neck of the guitar down one of his pant legs, and covering up the body with his sweatshirt. He then picked up another guitar and started strumming it, perhaps to look less conspicuous, before exiting the store.

He is described as a white man in his 20s or 30s wearing “extremely large, baggy pants,” as well as a black coat and a Toronto Maple Leafs baseball hat.

The robbery that was taking place as they were browsing instruments in the shop.

The suspect fled into a car being driven by an accomplice described as wearing a black face mask, a black hoodie, and sunglasses.

Along with releasing the surveillance video, the York Regional Police #2 District Criminal Investigations Bureau issued a statement, reading in part, “Investigators learned that on Tuesday, December 20, 2021, an unknown male suspect entered the store and stole a guitar by hiding it down his pants. He fled from the area in a vehicle being driven by a second male suspect. The guitar stolen was a Gibson Custom Shop 60th Anniversary ’59 Les Paul Standard electric guitar, valued at approximately $8,000 [Canadian].”

Contrary to the SNL joke, the suspect still remains at large. Anyone with information is encouraged to contact the York Regional Police #2 District Criminal Investigations Bureau at 1-866-876-5423, ext.7241, or call Crime Stoppers at 1-800-222-TIPS, or leave an anonymous tip online at www.1800222tips.com.

The surveillance video can be seen below, followed by the aforementioned SNL “Weekend Update” joke (at the 11:09 mark