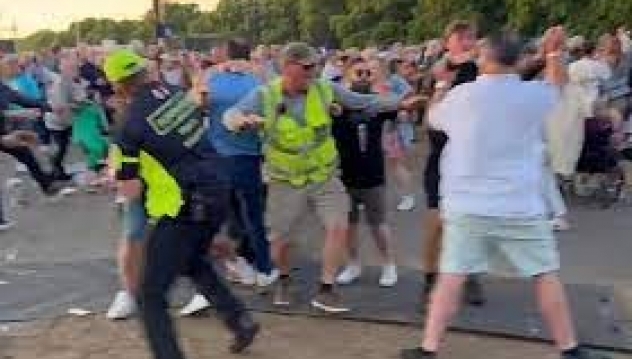 In a rather ironic concert moment, a fight broke out in the crowd during the EAGLES set at a BST concert in Hyde Park while, of all things, the band was performing the song "Take It Easy."

Clearly not taking a lead from what was happening onstage, the scuffle took place in the Diamond VIP seating area near the stage as multiple concertgoers threw punches and grappled. Security took a few knocks as well as they attempted to intervene and break up the fight.

All as the band is onstage singing the lines, "Lighten up while you still can / Don't even try to understand / Just find a place to make your stand / And take it easy."

Another line from that EAGLES classic seems to be fitting of what happened next - "We may lose and we may win / Though we will never be here again" - as those involved in the fracas were removed from the concert viewing area.

The band's "50 Years" tour now has some time off after recently making its way through the U.K.