KNUCKELDUST to play at the HATE CITY 2009 festival in Sofia

As previously announced, the festival will be headlined by VENDETTA who are getting back together for a one off reunion show. Hate City 2009 will be held atВ The Box club in Sofia, Bulgaria onВ 17 October.

The last band to be confirmed for teh festivall bill is Knuckledust from London, UK!

Here's the full list of bands playing at the Hate City 2009 festival:

Tickets priced 20 BGN, 10 (Euro) are on sale at Рћ.Р§.Р—.В and Block shops in Sofia and can be purchased onlineВ HERE. 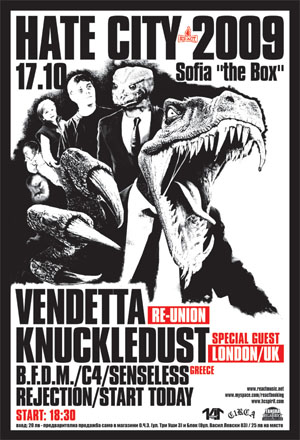