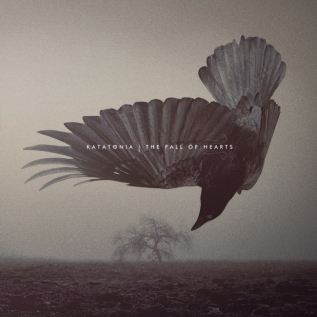 KATATONIA are definitely one of those bands that prefer to play it safe= these here Swedes are the kind of musicians that are always one step ahead – beyond fan’s expectations, beyond what’s hip, not caring too much about modern studio sound or image. What’s even better, they always seem to master this kind of changes and transitions perfectly.

But the simultaneous quitting of both Norman brothers in 2009 made us question what the future of one of Europe’s most important rock/metal bands holds. Their 2012 album ‘Dead End Kings’ was pretty decent although no such thing could be said about the dreadful unplugged releases ‘Dethroned & Uncrowned’ and ‘Sanctitude’.
Now, after another line-up change which saw the band part ways with long time drummer Daniel Liljekvist, it is wholly up to original members Jonas Renkse and Anders Nyström to continue KATATONIA’s mighty legacy.
‘The Fall of Hearts’ is just that – another step forwards for the Swedish legends that sees them evolve while retaining their trademark sound. This is a worthy yet far from brilliant album – it’s multilayered, skillfully executed, unusually long (with some extra 10-20 minutes compared to previous releases) and yet pretty watered down and all over the place.
Just like on recent OPETH and ANATHEMA albums, KATATONIA have gone for more complex arrangements, loads of synths, some 70’s guitar riffing, a lot of rock with notable prog influence (most evident in ‘Serac’, ‘The Night Subscriber’ and ‘Last Song Before the Fade’). The music is good enough yet far from KATATONIA’s own standards – this is by no means as good as or even close to classics ‘Last Fair Deal Gone Down’ or ‘The Great Cold Distance’.

Seems that while striving for musical progression and complexity, Renkse and Nyström forgot about that thick, blackened atmosphere that was so characteristic of the band’s sound just some years ago. Similar is the case with the album’s lyrics and vocal lines – even though they’re once again inspired by woe and lover’s grief, the tracks just lack memorable parts or choruses, unlike olden tracks like ‘July’ or ‘Ghost of the Sun’.
The problem with ‘The Fall of Hearts’ is not that it’s not metal – KATATONIA moved away from the “true metal” realms more than a decade ago. The awful acoustic influences (check out ‘Pale Flag’ and ‘Decima’) aren’t a real issue either. Greatest setback here is that KATATONIA have moved away from what they did best – simple (yet not minimalist) pieces that were packed full of great atmosphere that no other band could achieve.
Tweet
Предишна новина: RADIOHEAD - 'A Moon Shaped Pool' (2016)
Следваща новина: OPETH – 'Sorceress' (2016)