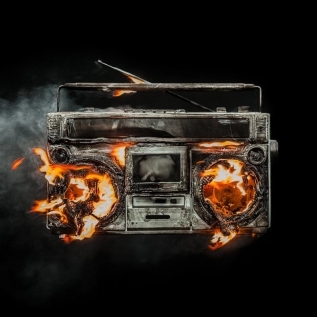 Green Day have never been a cornerstone in my personal music taste since I got older, which I do admit, sounds a bit odd, but is true. I started listening to this stuff when I was already in my 30s and “American Idiot” was one of those albums, you know? I was around at the time when they broke up, but back then I thought they were utter shite. It was only 15 years later when I realized “Basket Case” was an anthem for a generation and I really don’t want to go into all kinds of arguments whether this is punk rock or not, thankyouverymuch.

Punk is just one of the many aspects that “Revolution Radio” has. But it also has The Beatles, The Ramones, The Beach Boys and even The Who in the mix and Green Day are grownups now, so even if most of the time they are still short, loud and triumphantly bombastic, there has always been a message since “American Idiot”. I love music that speaks about sentiments of all types and I don’t mind if it is political or not, but when one of the biggest rock bands in the world addresses issues like American ignorance, it’s a commendable thing. A lot of bands would lose this value to take the next step into the mainstream, but Green Day somehow managed to take that baggage with them.
Make no mistake, “Revolution Radio” is not “American Idiot” and it’s not “21st Century Breakdown”. It is a journey into a world of recurring images of guns, wars and other features of the crumbling world, but without the slogans and the fury of their rock operas. It’s the message that matters much here.
And the message is easy to get, because Green Day have never had the problem to show everyone that songwriting does not have to be complicated to be effective.
This new album might not be so easily summed up, but still it is all about straightforward anthems (“Somewhere Now”), snappy catchphrases (“Say Goodbye”) and stop-start-stop powerchords  (“Bang Bang") that build up the whole record.
Of course, in the end of the day we’ve got some kind of a recap opus called “Forever Now” and although it can’t get much more dramatic than this at this point, you can clearly see this peak is not big enough to wrap it up. This band has balls, talent and constituency. They are here for the last 30 years and without them there’s no Blink, no My Chemical Romance and no Fall Out Boy. They are the living proof that you can write amazing pop songs, sell them as punk songs and still retain your credibility. Amen to that!
Tweet
Предишна новина: SUICIDAL TENDENCIES - ‘World Gone Mad’ (2016)
Следваща новина: KORN - ‘The Serenity of Suffering’ (2016)