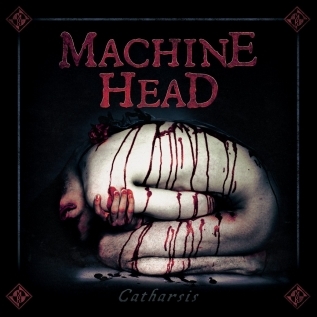 I sigh heavily as I stare at the empty page in Word for a while. The feeling is like before one of these conversations with the missus (hi, honey!) that end with me sleeping on the couch no matter how I approach them. The options are the following:
Passive-aggressive: I have good news for you in case you were hoping for an album that opens with, literally, Slipknot’s ‘Surfacing’ (‘Volatile’); continues with a track that combines the melody from ‘Halo’ with the riff from Strapping Young Lad’s ‘Love?’ and a chorus right from Korn’s ‘Untouchables’; features a song that sounds like someone’s reading a leaflet about the dangers of the drug lifestyle over some Limp Bizkit riffs (‘Triple Beam’); and includes probably the only recorded instance of someone other than Dave Mustaine trying to emulate the singing – yes, singing, not playing – style of Dave Mustaine (‘Heavy Lies the Crown’)… It is also 75 minutes long but, funny enough, actually feels longer when you listen to it.
Active-aggressive: WHAT IS FUCKING WRONG WITH YOU?! THIS IS FULL OF LESSONS YOU SHOULD HAVE LEARNED FROM ‘SUPERCHARGER’. THAT ALBUM ALMOST ENDED YOU AS A BAND! HAVE YOU FORGOTTEN THAT?!?!?!
Subdued: Okay. Nu-metal and a few more songs than there should have been. It’s not the end of the world. The problem is that many of the ideas in ‘Catharsis’ are mediocre, predictable and second-hand. It is too easy to point to the songs certain parts of the album sound like – and MACHINE HEAD ’s identity gets lost in this. People used to make fun of Skinlab for doing the same thing MACHINE HEAD had done two years prior. Now it is MACHINE HEAD that rehash Slipknot and Korn ideas from 15-20 years ago. They might be good ones but they’re used – and you’ve already heard them before. It’s dull.
Optimistic: Speaking of this band’s capabilities, the ability to write good songs saves part of the album. The title track combines piano, clan singing, metal melodies, heavy grooves and explosive riffs – with an anthemic potential. Despite its lame start, ‘Kaleidoscope’ is a brutal fast track with an epic chorus. ‘Screaming at the Sky’ and ‘Behind a Mask’ are also worth your time. And if you leave aside the fact that if I and Robb Flynn talk politics, it will end in a fistfight, ‘Bastards’ is a sincere, brave and, I’d say, successful attempt by MACHINE HEAD to incorporate Celtic punk motives. This is the album’s most exciting moment.
Pessimistic: Unfortunately, most songs in the album are not exciting. Four or five of the songs actually make this a worse album than it could have been without them. The musicians’ talent does save ‘Catharsis’ from the train wreck it would have been in the hands of a lesser band. MACHINE HEAD, however, have already shown that they can write much better music. This makes ‘Catharsis’ a step backwards.
Comedic: This review has been a bit of a catharsis! Ba-dum-tssshh!
Cynical: And has been just as consistent as the album.
Tweet
Предишна новина: CORROSION OF CONFORMITY - 'No Cross No Crown' (2018)
Следваща новина: KID ROCK + STALKER + TEN YEARS AFTER