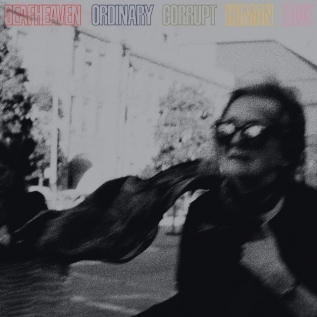 DEAFHEAVEN is those bands I've heard more about than I've heard their music. My own post-rock moment passed for good in less than a winter some 7-8 years ago. Since then I'm quite cautious about new music that exploits this label.

Of course, when it comes to DEAFHEAVEN, more than half a dozen genre definitions are usually involved... which makes their label for this release quite appropriate. ANTI Records – Epitaph’s little brother - has a pretty diverse mix on their roster: punk, metal, hip hop, reggae, soul, indie folk, rap rock, indie rock and... Tom Waits.

Known for combining some of the most beloved and at the same time diametrically opposed styles in "extreme" music, DEAFHEAVEN has at least one "critically acclaimed" album behind them - the blindingly pink and melodic Sunbather. Their new creation seems like an exact copy of the same winning concept. Blast beats, epic passages, clean guitars and black metal-ish vocals. All this served in lengthy portions.
The opener You Without End enters smoothly with piano, spoken word, major scale arena-rock solos on the guitar and growling vocals. The result is pretty bubblegum, to be honest. Things tighten up a bit in Honeycomb – the album’s first single. Black metal meets post-rock by-the-book with more guitars and much faster rhythm. Emotional, cinematic, atmospheric, unmistakably repeating the scheme we will hear in the rest of the songs, spreading over a total of 11 minutes.
The next two tracks - Canary Yellow and Near - do not change much of the dynamics. A slight fresh glimpse in Glint, especially around the 6th minute, where they’ve ripped up Radiohead a bit.

The wonderful Chelsea Wolfe starred in Night People, but unfortunately, it doesn’t help much. At all. It seems to me that the best song of the album is the last one - Worthless Animal. For some inexplicable reason, it reminds me of that humorous project called The Burzums – the one that mixes surf rock with black metal...
In conclusion - for me, Ordinary Human Corrupt Love is so polished, epic and perfect that it loses any depth. I probably miss something important because of the fact that I have never been a huge fan of the band. Perhaps someone who feels more emotionally connected to their back catalog will be able to find some thrill in these seven tracks. I did not.
There is something else I can not and should not ignore. As I mentioned earlier - this is an excellent record, technically speaking. The sound is truly incredible, everything sounds divine. It’s just the songs are tedious pop, tucked in black skinny jeans.
Tweet
Предишна новина: IMMORTAL – ‘Northern Chaos Gods’ (2018)
Следваща новина: ALICE IN CHAINS – 'Rainier Fog' (2018)