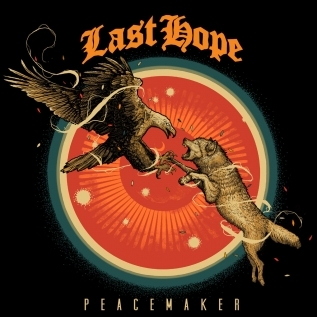 There might be plenty of bands mining the same well-worn seam, but it takes genuine artistic inspiration to forge something different out of the same old raw materials. Forgive my French here, but I really believe what Steven Blush once said in his book ‘AMERICAN HARDCORE: A TRIBAL STORY’: ‘Like most revolutionary art and original thought, Hardcore clashed with mainstream society and generated resistance’.

See, LAST HOPE has gone through a lot and still has managed to keep the original integrity, no matter the years, the trends and the fashion.

Now comes ‘Peacemaker’, a spectacular album that continues this most appreciated of metamorphoses and is far superior than everything done so far, the groundwork having already been done for the last 20 years. The line-up is now completed by Dido Peshev on guitar and together they are a cohesive and convincing unit. As a matter of a tradition of some kind, LAST HOPE almost always have some guest appearances from fellow brothers, and this time they have Carl from FIRST BLOOD on ‘One of US’, which is probably one of the strongest songs here, Gregor from RISK IT! on ‘Stop Crying’ and Delian and Alex from the legendary Bulgarian bunch VENDETTA. Arguably, the self-titled track is the album’s high point, a  stomping midtempo manic riff with a singalong chorus accompanied by a very, erm, urban video.

The production is forceful and lavish. LAST HOPE are challenging their own stakes here and if someone is going to take this genre to the High Street, they are most likely to be the contenders.
Clocking just 25 minutes, after playing the album once, I was actually a little afraid to go back and listen to it again and risk coming away disappointed, it is that good. No worries. Each new spin proves to be complimentary to your fresh pleasures, I can now guarantee that. It’s a pounding you won’t forget in a hurry!
Tweet
Предишна новина: ТДК – УСПЕХ (2019)
Следваща новина: NILE + BLOOD INCANTATION + MAYHEM