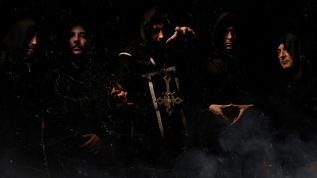 This will likely come as a shock to no one, but ‘Vile Nilotic Rites’ sounds suspiciously like ‘At the Gate of Sethu’, ‘Annihilation of the Wicked’... and pretty much every album since ‘In Their Darkened Shrines’ (2002). And probably mainman KARL SANDERS has no other option but to stick to his winning “Ithyphallic Metal” formula, knowing full well that NILE fans won’t tolerate any serious changes.
Which doesn’t necessarily mean ‘Vile Nilotic Rites’ is an awful album by any means. SANDERS is a skillful musician and composer, capable of providing that blasting blend of hyperfast death metal with a MORBID ANGEL-esque melodic edge and epic, cinematic moments. This album peculiarly saves the best for last - with tracks like ‘Where Is the Wrathful Sky’, ‘The Imperishable Stars Are Sickened’ and ‘We Are Cursed’ serving as a reminder of just why NILE is still a powerful, relevant band.
BLOOD INCANTATION - ‘Hidden History of the Human Race’
Although their ‘Starspawn’ debut turned some heads in the extreme metal underground, few expected BLOOD INCANTATION to follow it up with something so amazing.
Cosmically heavy and sonically ambitious, ‘Hidden History of the Human Race’ is among the most non-standard death metal releases of the decade and definitely among the best extreme albums of 2019. Consisting of mere 4 tracks (one of which is 18+ minutes long!), the sophomore BLOOD INCANTATION somehow combines a straightforward American sound (part MORBID ANGEL, part CANNIBAL CORPSE), frantic solos and spacious psychedelic parts, enhanced by the warm analogue production.
A+!
MAYHEM - ‘Daemon’
One of MAYHEM’s strong points is their unpredictability. Take ‘Daemon’ for example - it sounds nothing like its predecessors ‘Esoteric Warfare’ and ‘Ordo ad Chao’. And that’s probably the reason for the recent debate among black metal elitists raging on the band’s “trveness”. And if there’s debate and controversy, then it’s a job well done for MAYHEM.
Musically, things are pretty great too. ‘Daemon’ rages with a pretty natural, partly old school black metal sound, in-your-face riffs and twisted ritualistic vocals that would fit in the mythical ‘De Mysteriis Dom Sathanas’. You don’t have to believe us - just check the feral ‘Aeon Daemonium’, ‘Daemon Spawn’ or ‘Black Glass Communion’ out.
Tweet
Предишна новина: LAST HOPE - 'Peacemaker' (2019)
Следваща новина: OZZY OSBOURNE – ‘Ordinary Man’ (2020)