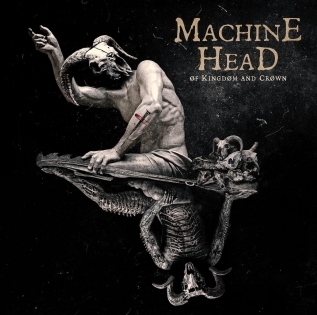 For their 30 years as a band, MACHINE HEAD have a few times flown close to the sun like Icarus with undisputed classics like ‘Burn My Eyes’ (1994) and ‘The Blackening’ (2007).

And the band led by Robb Flynn has more than once ended up crashed on the ground a few releases later – with a badly received new album, creatively drained, with a scattered lineup, and forced to start anew.

‘Of Kingdom and Crown’, MACHINE HEAD’s tenth album, comes after one such creative and career rock bottom. Is it a new resurrection after which they would fly up towards the sun again?
Hell. Fucking. Yeah!
For its almost 60 minutes ‘Of Kingdom and Crown’ offers everything one could hope for from a MACHINE HEAD album, made and performed maybe better than ever. And then some.
On one side you have some of the heaviest, most aggressive and extreme songs MACHINE HEAD have ever recorded – like the thrashing ‘Choke on the Ashes of Your Hate’, the blastbeat and death metal riff driven ‘Become the Firestorm’, or ‘Bloodshot’ which mixes groove with hints of punk and hardcore.
On the other, there are some of the most well-crafted melodic choruses in the band’s discography – with a lot of Ooohs and Aaaahs for the audience to sing along to at future live shows. (‘My Hands Are Empty’ is basically a whole song that’s a chorus.) And you also have longer, more epic songs like the 10-minute opener ‘Slaughter the Matyr’, ‘Unhallowed’ (culminating in a galloping rhythm with vocal harmonies echoing Iced Earth’s best offerings), and the closer ‘Arrows in Words from the Sky’.
Meanwhile, ‘Of Kingdom and Crown’ is a concept album that tells the story of bloodshed in a post-apocalyptic future. This is MACHINE HEAD’s first attempt at this and it is impressive how well it has been done. The atmospheric and narrative preludes just divide the album and set the tone for its different parts – without weighing and watering down the music and taking away from what you are here for. The main course are the songs, full of awesome and memorable moments – single riffs, breakdowns, solos, choruses…
‘Of Kingdom and Crown’ is one hell of an ambitious, diverse, but also focused and dedicated album. How much of this is due to the new guitarist Wacław ‘Vogg’ Kiełtyka (of Decapitated fame), how much is some rediscovered source of inspiration and ideas for Flynn, how much is the interplay between the two of them – we can only guess. But MACHINE HEAD have not sounded that powerful and confident in a decade. Dare I say ever.
Tweet
Предишна новина: DREAM THEATER - 'A View From The Top Of The World'
Следваща новина: CLUTCH – 'Sunrise on Slaughter Beach' (2022)