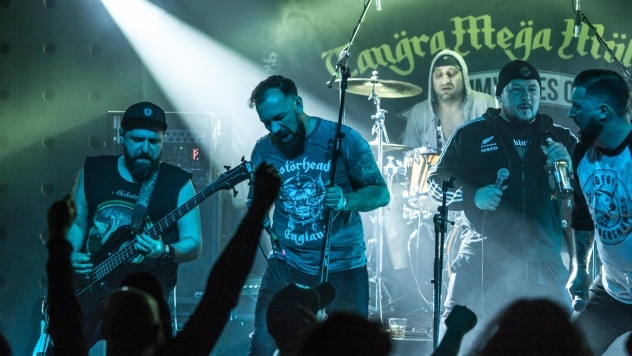 There is no better way to celebrate the life and music of LEMMY KILMISTER than this – with a noisy, boozy, emotional rocknroll party featuring smiles and laughs rather than tears. Because the main idea of the December TANGRA MEGA ROCK live night is not to remind us of the death but rather to underline the immortality of a man born on Christmas eve only to become a true god, like BOWIE or THE RAMONES.

Truth is that in the three years since HE crossed to the other side, all TANGRA MEGA ROCK activist and close friends hardly stopped hailing LEMMY and MOTÖRHEAD. One can hardly forget the great TANGRA MEGA MULLETS live in 2016 – a grand night of classic MOTÖRHEAD tracks presented by selected singers and musicians that took the show on road in 2017, bringing it to Bulgarian cities that have hardly experienced noisy, true to the bone rocknroll at all.

History was to be repeated this December 28th – featuring grand guitars, pounding bass and an impressive team of singers, bringing an experience that was much more rocknroll and dirty than those neat professional tributes. After all, LEMMY and MOTÖRHEAD deserve just that.

DAILY NOISE CLUB, the dirtiest and noisiest rock band around were just the right pick for opening act – they’ve been raising hell for some 20 years now and their latest release 'Burning Hearts Broken Arrows' isn’t half bad. Their drummer DAKATA proves to be this night’s hardest working musician – he hardly steps off stage as he’s also part of the main band - the TANGRA MEGA MULLETS themselves (including ALEXANDER OBRETENOV, VASSIL PARVANOVSKI and MARTIN STOYANOV). DAILY NOISE are also the only band to perform original material tonight – after their short and sweet set, it’s all LEMMY and MOTÖRHEAD for two whole hours.

After that epic 2016 night we know full well what to expect. And still, some performances exceeded all expectations. MULLETS deliver the goods while all singers sing those MOTÖRHEAD classics not trying to copy the great LEMMY but rather emitting the rocknroll energy through their own style.

NUFRY is just smashing (when has he been not?), SHUTA (A.K.A. Skinny J, A.K.A. Born To Cut Hair) delivers a soothingly hooligan rasp, VASKO RAYKOV knows how things are done (he would also sing on a bunch of unplugged covers), while rock radio chief VARBANOV’s infernal take on 'Orgasmatron' serves both as a tribute to LEMMY and a big F OFF to all things Soviet still polluting our native Sofia.

All was good, all was great. Highlights included STIFF’s numerous appearances (especially his take on 'R.A.M.O.N.E.S.', 'Killed By Death' and 'Overkill') and NASSO RUSKOV’s absolutely mindblowing renditions of 'Capricorn' and 'Metropolis' that were suddenly transformed into artsy post punk pieces.