DEAD CAN DANCE live at the Roman Theater 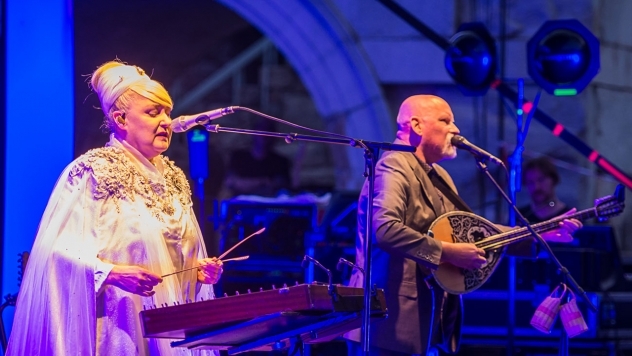 Roman Theatre, Plovdiv, 30.6.2019
Words by: Nikola Shahpazov, photos: Orlin Nikolov-Orleff
It is truly astounding how long it took us to see the grand and gracefully aging DEAD CAN DANCE play a show in Bulgaria.
Back in school we viewed the band as a sort of a cosmic enigma, untouchable and certainly unreachable – we grew up with the understanding we will never see them on stage. After all, by the time we started listening to their music intently, GERRARD and PERRY had put their project to rest and moved on their separate ways.

Even their 2005 reunion did not bring much hope – it was short lived and consisted of only a few live dates – all too far and away.
The big change took placed in 2010 when PERRY stated (in Sofia, of all places!) what we hoped to hear for so long – that he and GERRARD were on the verge of resurrecting DEAD CAN DANCE.

For real, this time. In fact, by that time they were already discussing their next album. 2012’s ‘Anastasis’ was the evidence that the two could still produce a splendid collection of studio recordings but the following tour was even more important, as it gave us the chance to finally experience the magic of this band live..

And a glorious experience it was. GERRARD and PERRY were both confident and captivating, yet maybe the most important thing was they made the impression of a tightly knit band – a thing evident in every gesture and ever note they played/sang. We knew back then that DEAD CAN DANCE were back for real and they wouldn’t be going away any time soon.
The following years saw the band’s interest in Bulgarian folk music (though evident previously as far back as ‘Within the Realm of a Dying Sun’) grow – while LISA GERRARD started recording and performing live with THE MISTREY OF THE BULAGRAIN VOICES ensemble, DEAD CAN DANCE’s latest release ‘Dionysus’ proved to be their most Balkan and Bulgarian one ever.

And finally it happened – PERRY and GERRARD’s cosmic voices echoed together – in the Greek, Roman and Bulgarian city of Plovdiv, where winding streets, rolling hills and rivers meet and intertwine just like the ancient symbols and civilizations that once ruled there – just like that happens in DEAD CAN DANCE’s many-facetted music.
We have to admit feeling a bit worried and a tiny bit scared that after our highly emotional meeting with DEAD CAN DANCE some 7 years ago, their first show in Bulgaria might come off as a more run-of-the-mill affair.
And we were wrong to ever think that – their gig in Plovdiv was nothing short of triumphant – a celebration of the beauty and the never-ending stream of energy of these magnificent musicians.

The grand and ancient Roman Theater was only partly responsible for this great evening – what was even more crucial was the fact that this tour differs greatly from their previous two. In 2012 the band focused on the freshly released ‘Anastasis’, while this time DEAD CAN DANCE were playing a retrospective set, celebrating their many musical faces and influences.
That’s why we could enjoy older, post-punkish tracks like ‘In Power We Entrust the Love Advocated’, ‘Mesmerism’ and ‘Labour of Love’, as well as the great non-studio track ‘Bylar’, that the band only played live back in 1995/1996.
We were, of course, prepared for the glorious ‘Xavier’, the hypnotic ‘Yulunga (Spirit Dance)’, and for PERRY’s favourite Tim Buckley track - ‘Song to the Siren’, but we were completely caught off-guard by the greatness that is ‘The Wind That Shakes the Barley’ (a truly amazing and very powerful performance by GERRARD) and ‘Severance’ (apart from singing all too confidently and godly, PERRY conducted this whole live gig and celebrated his 60th birthday – all in one sitting!).

Some people might have found the tracks off ‘Spleen and Ideal’ as most enjoyable, while others were seen openly crying while hearing the magical stuff off ‘Into the Labyrinth’ and ‘Within the Realm of a Dying Sun’, but fan favourites aside, DEAD CAN DANCE played a rather long set that was totally devoid of any filler, or any mishaps for that matter.
That’s why we would refrain from pointing out any highlights – PERRY and GERRARD’s first gig here was an overemotional and at the same time meditative affair that felt like one whole, complete ritual that left a mark on each and every one of us gathered there.