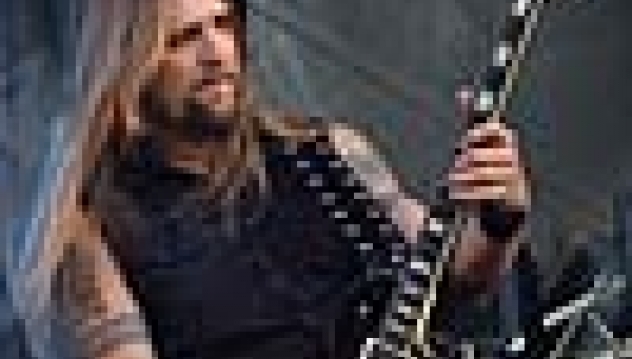 "And thinking about a tour, weвЂ™re definitely trying to schedule a show in Sofia."

AmorphisВ are great! And they got better and better with every next album! Even if it's not completely true, you can't deny that this new 'Skyforger' opus is amazing. And it is a good reason for us to talk to guitarist and band leader - Esa Holopainen.

HEY, ESA. I HAVE BEEN ASKING YOU SO MANY QUESTIONS THROUGH THE YEARS SO WHY DONвЂ™T YOU START BY ASKING ME ONE?
Ha-ha! Well, howвЂ™s Easter?

A LOT OF EGGS, YEAH. WHAT ABOUT YOU? WHAT DID YOU DO LAST WEEK WHEN IT WAS YOUR EASTER?
We had a good Easter. We made four shows here in Finland. We did gigs all around the country all the time.

YOU DIDNвЂ™T HANG OUT WITH FAMILY? YOU JUST PLAIN DID YOUR JOB?
Yeah. It was the same last year. Every year when there are holidays and days off all the booking agencies go greedy and they try to book as many shows as possible.

вЂSKYFORGERвЂ™ IS THE THIRD AND LAST PART OF YOUR TRILOGY, SO WHAT THE FUCK IS COMING NEXT?
I donвЂ™t know. Maybe we will go more politicalвЂ¦ (pause) No, I donвЂ™t think so. I think weвЂ™re going to keep on with the themes of Kalevala. In which form or with which story вЂ“ I donвЂ™t know. But Kalevala is so strong inside us that it is always going to be involved with us in some way. WeвЂ™ll see.

THE FEEDBACK I HAVE BEEN COLLECTING FOR THIS LAST ALBUM OF YOURS, вЂSKYFORGERвЂ™, IS THE BEST FEEDBACK FOR AN AMORPHIS ALBUM THAT I GOT SO FAR WHICH IS AMAZING, ISNвЂ™T IT?
I have been hearing comments from a lot of people that they have been awaiting for this kind of album from Amorphis for years and on the other hand I have people telling me it is the best one ever. As a musician that is the best feeling you can get and I totally appreciate all the feedback.

PERSONALLY I WOULD SAY THAT вЂSKYFORGERвЂ™ IS EVEN MORE GUITAR ORIENTED THAN YOUR PREVIOUS ONES. AM I WRONG?
No, youвЂ™re not. I think youвЂ™re absolutely right. It has more melody than every previous album. There are keyboard lines that we arranged around the guitars. And in every song there is more playing from the beginning to the end. It was very challenging. On the last album it was OK to rehearse the songs and go in the studio, but this time we really had to rehearse the arrangements a lot and practice playing.

I THINK YOU ALSO USE MORE GUITAR DELAYS THAN BEFORE?
Yes, we do. For example the song вЂSky is MineвЂ™. It is one of the songs I was talking about when I said we arranged keyboards around guitars. Almost all the songs have delayed guitar lines that were originally keyboard lines. We wanted to try how it sounds with guitars and it was really amazing. It really gave a new dimension to the whole song. It was very challenging to arrange the guitars like that and it is going to be even more challenging to play them live.

YOU SAID IT OPENS UP A NEW DIMENSION TO THE SONG BUT NOT ONLY. ALSO PSYCHOLOGICALLY SPEAKING IS THE DELAY OPENING NOT ONLY A NEW DIMENSION BUT LIKE A MULTI-SPACE THING, MEANING THAT THE WORLD SHOULDNвЂ™T BE ONLY BLACK AND WHITE?
Yeah. It opens a lot of doors. As a player it gives you more opportunities to try things you wouldnвЂ™t normally do. The thing is on вЂSky is MineвЂ™ we have these keyboard parts played by guitar and it gives it this spacey feeling. 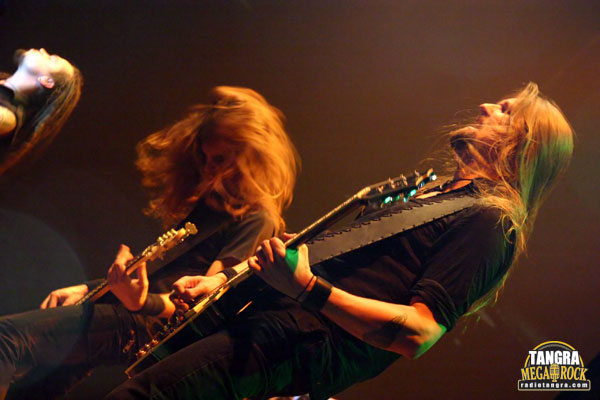 YOU MENTIONED THE KEYBOARDS HERE. IS YOUR INSPIRATION FOR WRITING MUSIC ACTUALLY COMING FROM GUITAR-DRIVEN MUSIC?
Well. In our band thereвЂ™s a five guys and obviously thatвЂ™s a lot of music. What a keyboard player plays is mostly written by keyboardists. When we start to write songs I can either start it by keyboards of guitar. Throughout the years keyboards became a more and more important element for us. At the start they were in the back. Now they are a dominating element, which is great since you can do a lot of things with them.

IN THE BEGINNING OF вЂHIGHEST STARвЂ™ вЂ“ IS THIS AN AUTHENTIC FLUTE OR A SYNTHESIZER?
ItвЂ™s synthesizer. But on the album we have a saxophone player playing real saxophone, but on that track it is the keyboards.

AGAIN WITH THE KEYBOARDS! IT IS FUNNY HOW LUCKY YOU WERE FOR FINDING TOMI JOUTSEN. HIS VOICE IS AMAZING!
Yes it is amazing. I think it amazes us after every record. When we did вЂEclipseвЂ™ with him we were all surprised at how good he actually is. With вЂSilent WatersвЂ™ and now вЂSkyforgerвЂ™ he has and even deeper diversity of dimensions in his voice. Ant it is really great how he builds up great vocal harmonies. ThatвЂ™s one thing that amazes us.

TALKING ABOUT THE HARMONIES IN HIS VOCE вЂ“ DO YOU SHAPE YOUR MUSIC AROUND HIS VOICE OR DOES IT COME NATURAL?
Usually it comes natural. We usually have all the music finished before he starts to arrange the vocal line. So there are some things that are actually done beforehand and during the time we rehearse all the songs. But usually we come up with the harmony lines in the studio. And it is great feeling to go to the studio with a vocal and listen to the great result.

IS IT MARCO HIETALA AGAIN?
Yes. He produces the vocals and actually does the backing vocals.

TRACK NUMBER 8 вЂ“ THE TITLE TRACK вЂSKYFORGERвЂ™. AS FAR AS IвЂ™M NOT DEAF IT HAS PRETTY MUCH THE SAME MELODY AS THE SONG вЂBORN OF FIREвЂ™ FROM YOUR PRE-PREVIOUS RECORD вЂECLIPSEвЂ™. IS THAT SO?
Yeah. I was thinking that after everything was finished. It really does remind us of that song.

DONвЂ™T TELL ME THAT HAPPENED ACCIDENTALLYвЂ¦
No, really. It happened like that. Without intention. It is kind of different. That basic line that you can hear on the track itself really is similar. But that's only if you take the acoustic version. And then again it is only the beginning of the song.

ON THAT PROMOTIONAL VIDEO THAT YOU PUT ON THE INTERNET WHERE ALL THE MEMBERS OF THE BAND EXPLAINED WHAT THEY FAVORITE TRACKS ARE, HALF OF THEM PRONOUNCED THE NAME OF THE ALBUM вЂSKYFORGERвЂ™. WHY THE HELL?
I donвЂ™t know. ThatвЂ™s the Swedish way to say it.

YOU COULD CATCH A LOT OF GRAMMAR MISTAKES IN JOUTSENвЂ™S INTERVIEWS THAT HE DID THROUGH THE YEARS. HAS HIS ENGLISH APPROVED NOW?
I donвЂ™t think it was that bad. I donвЂ™t think he had done any interviews or spoken so much English before he joined Amorphis, so itвЂ™s obvious you could hear a quite strong Finnish accent here and there. But thatвЂ™s good. The last thing weвЂ™d want is a Finnish guy trying to speak like an American.

BUT IN THE SAME TIME THE LYRICS ARE WRITTEN IN VERY GOOD ENGLISH AND WHILE SINGING JOUTSEN HAS NO ACCENT WHATSOEVER, SO THAT LEADS ME TO BELIEVE HE IS VERY GOOD AT MIMICKING AND REPRODUCING SOUNDS. IN MUSIC WE KNOW THE ENGLISH LANGUAGE IS MOST APPROPRIATE FOR ROCKвЂ™N ROLL. IS THERE ANYONE HELPING YOU WRITE THE LYRICS AND PUTTING THEM IN AN ENGLISH THAT WOULDNвЂ™T MAKE PEOPLE ON THE BIG ENGLISH ISLAND LAUGH вЂHA-HA WHAT THE FUCK IS THISвЂ™?
Well, Marco is very strong with English so heвЂ™s helping, and there are also friends thatВ  check the English. It is OK, because the result we get is very, very good.

IT WAS AN YEAR AND A HALF AGO WHEN YOUR FIRST CONCERT IN BULGARIA TOOK PLACE. DO YOU KEEP ANY SPECIAL MEMORIES FROM THAT ONE?
It was great. Good crowd and great people. Also a huge after show party. Ha-ha. We had a good time.

I WONвЂ™T BE ASKING YOU ABOUT A POSSIBLE NEW SHOW IN BULGARIA, BECAUSE I KNOW YOUвЂ™RE STILL ARRANGING THE DATES FOR OCTOBER. YOUR FIRST SINGLE FROM THE NEW ALBUM IS вЂSILVER BRIDEвЂ™. ARE YOU PLANNING A NEXT ONE ALREADY?
Yes, there is an idea about a second single. It is probably going to be вЂFrom the Heaven of My HeartвЂ™. And thinking about a tour, weвЂ™re definitely trying to schedule a show in Sofia. 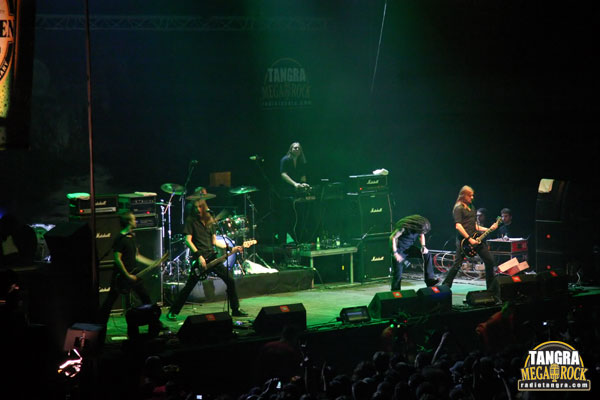 TALKING ABOUT TOURS, IS THERE A BAND THAT YOU HAVE ALWAYS WANTED TO PLAY WITH, SHARE THE BILL, BUT HAVENвЂ™T HAD THE CHANCE TO DO IT SO FAR?
It has always been kind of a realistic dream for us to share the stage with some cool band like Porcupine Tree. Another band that we only played with at a festival in America is Riverside.

TheyвЂ™re a great band and I can easily imagine us doing a tour together. And of course, you know, it would be great to tour with Led Zeppelin and Pink Floyd. Ha-ha! And also вЂ“ Faith No More is doing these comeback shows now. It would be great to play with them. I actually met with Bill at the show in Sofia. Really nice guy.

WHAT IS AMAZING IS THAT YOU GUYS IN AMORPHIS DONвЂ™T DO MUCH GUEST APPEARANCES ON OTHER ARTISTSвЂ™ ALBUMS AND YOU DONвЂ™T GET MANY GUEST APPEARANCES YOURSELVES AS WELL. THOUGH WE HAVE THIS NEW ALBUM BY BLACK SUN AEON, WHERE I BELIEVE WE HAVE TOMI JOUTSEN SINGING HERE AND THERE. BUT WHAT IS THE REASON FOR YOU NOT TO GO OUT MESSING WITH THE OTHER GUYS?
I donвЂ™t know. Probably no one ever asked. Ha-ha! But really вЂ“ we donвЂ™t do this much. I have appeared in some albums. But in Black Sun Aeon it is Tomi Koivusaari who is singing there. It is funny because he would probably never do this in Amorphis.

TONIGHT YOUвЂ™RE SHARING THE SHOW WITH CHRISTINA SCABBIA, WHOM WE EXPECT TO CALL IN LIKE 10 MINUTES. WHAT DO YOU THINK LACUNA COIL AND THAT GIRL?
TheyвЂ™re a great band. They have gone pretty far from where they started and got quite massive success. I think this is what they deserve really. It was all hard work for them. Please say hello to Christina for me.