PARADISE LOST and ORCHESTRA at the ROMAN THEATER in PLOVDIV 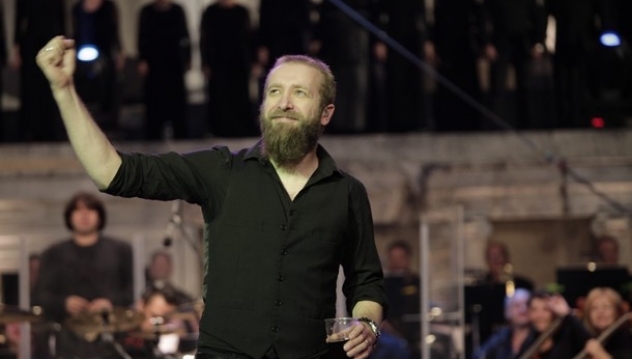 This is the fourth edition of the annual 'Sounds of the ages' and PARADISE LOST is set to play with a real orchestra for the first time. The prospect of witnessing this unique one and only PL orchestral show at the Plovdiv Roman Theatre has attracted cerebral metalheads and cosmopolitan goths from all over the world.There are many old fans wearing t-shirts from the 90's. It's equally obvious, however, that PL has crossed over to newer generations of fans. For the last 3 albums the band have re-approached their finest form and the majesty of of their masterpieces is now striding head and shoulders above everything they have done before. But there's one more reason why everybody is so excited tonight. The band is recording the show for a DVD release next year.

It doesn't come as much of a surprise that tonight the pair of two separate sets (one with the orchestra and one without "these fine people" as Nick called them) is immensely strong. It's a solid wall of doom laden hooks, songwriting maturity and razor sharp call to arms vocals by Nick Holmes. With orchestration by Levon Manukyan and George Miltiyadoff adding lush dashes of colour to such classics as 'Joys of The Emptiness', 'Soul Courageous' and 'Over the Madness' and haunting backing vocals of Rodna pessen choir to the stupendously atmospheric 'Gothic' this show is epic. PL's second album 'Gothic' may have given the gothic metal its name but it's their later albums that truly shaped its sound.

It' s a lifetime experience for every PL fan, especially for those, who expected the brand new song 'Victim of the Past' which is going to be recorded in the next album. This track made many of assume that the next studio effort will be a heavier, with harsher vocals. This is only an assumption though.

Think back to a time when rock music really had something to say. It wasn't always 30 something shouty blokes complaining about a girl they never got or how much they hated their parents. The world of heavy music was one that didn't preach to the converted, it screamed the voice of the defiant, and dammit, anyone who wasn't paying attention would be swiftly beaten into submission. Well, folks, PL are proud representatives of that era. From the very moment they that they step out In front of the packed Roman Theatre, they are treated like veritable messiahs.

Lit in rich green purple and crimson hues, this ancient stage suits PL and while they were cautious during the first part, when the second set starts they immediately lock into a forceful groove. It's a confident display from the band. A dominant display. The consecutive 'The Enemy', 'Erased', 'Isolate' leave the audience breathless but it is 'As I Die', 'True Belief' and the encores 'Say Just Words' and 'The Last Time' that put the finishing touch of this fundamental concert.