PARADISE LOST and ORCHESTRA at the ROMAN THEATER - report 2 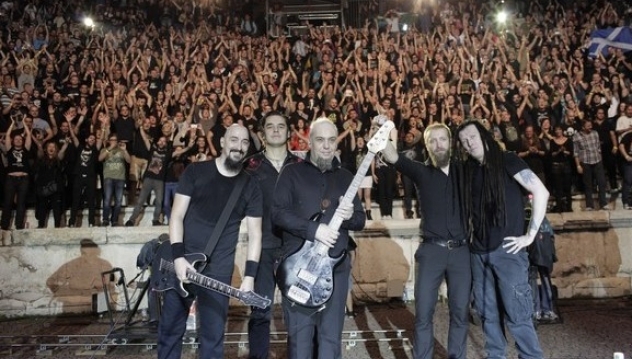 Even though this was PARADISE LOST’s fourth gig here, we consider the Plovdiv concert to be different and without a doubt – more special one than all previous ones.
Because their first two appeaances were in Sofia (in 2005 and 2010, both at Hristo Botev Hall) and both were badly organized and suffered a great deal of technical issues, nervous fans, nervous band, etc. Those were all hallmarks of most gigs organized by the shady character Hristo Rusanov. Thus the first proper Paradise Lost gig was at the now traditional rock festival in Kavarna in 2011.

There things were more serious and the band delivered a formidable performance, offering the fans a ride through their extensive discography. But that was simply a good, standard PARADISE LOST performance after which Bulgarian fans still craved for something special – something like the event, faithfully recorded for the ‘Draconian Times MMXI’ DVD. Still, we never believed our fourth meeting with the English grandmasters of gloom and doom would be so special. Or that it would be in the wonderful city of Plovdiv.

Няма But though surprising for us, this concert didin’t happen by chance. The orchestral collaboration was only the latest in a long list of such events – all held at the Ancient Roman Theater, featuring great artists like Tarja, Fish, Asia and our favourite guys (and a gal) from Anathema. It’s no wonder we mention Anathema – it was their Plovdiv gig that impressed us the most and was filmed for the splendid ‘Universal’ DVD.

In recent interview, PARADISE LOST mastermind Gregor Mackintosh mentioned the whole idea of having an orchestral gig at the Roman Theater came about after a conversation between Nick Holmes and Anathema’s Danny Cavanagh. You see, good ideas are often connected. And both these concerts were wonderfully similar. And wonderfully different, thanks be to God.

We knew which tracks PARADISE LOST had chosen for the first part of the concert – the one alongside the Rodna Pesen Choir and the Plovdiv National Opera Orchestra (conducted by Levon Manukyan). We knew that the PARADISE LOST mainman Mr. Makintosh had been picking tracks that had the orchestral feel to them all along. And, thanks to the ‘Tragic Illusion 25’ compilatioin, we had some idea how ‘Last Regret’ and ‘Faith Divides Us - Death Unites Us’ would sound given a symphonic twist. Of course, things were different live in Plovdiv. Bigger. And more real. Because of the ideal background of ancient stairs and antique statues that form the Roman Theater and because of Plovdiv’s Old Town – transformed on the concert day into an international gathering of PARADISE LOST fans – the winding streets are filled with Brits (and even some Scottish fanatics, later waving their national flag at the gig), Polish metalheads and Greek devoties who travelled to Bulgaria although they probably saw the band just a week ago (either at Athens or Thessaloniki) thogh with a very different setlist.
.

The atmosphere at the Ancient Theater is festive and that’s no wonder – these several thousand fans are pretty much as pumped up as the band itself.

The start is surprisingly shaky – gig opener ‘Tragic Idol’ suffers from a tragic sound quality, with both guitars and vocals impossible to hear. Fans don’t seem to mind and cheer and sing nonetheless. Good thing that after the awful start everything continues according to plan – the choir/orchestra/band combination works out (sometimes it sounds simply good, at other times – absolutely great) and the sound stays powerful, crisp and clear.

Pretty much as expected, PARADISE LOST stick to the predefined setlist (which we obtained some week earlier) and the rehearsals with the orchestra have been efficient – our favourites ‘Over the Madness’ and ‘Last Regret’ sound powerfully different, enhanced with symphonic might.

Holmes is neatly and almost formally dressed – looking more like a singer at La Scala than as the true metalhead rocking a Bathory t-shirt we saw at the band pressconference a day earlier. However, Mackintosh is balancing the atmosphere with freshly styled dreadlocks and a lot of headbanging – this is a metal gig, after all.

Nothing can ruin the whole atmosphere – neither the light rain, nor some faulty moments in Holmes’ performance.

PARADISE LOST have a very dedicated audience which came for a musical feast and that’s just what they get. New track ‘Victim of the Past’ is actually pretty good (very much in the vein of albums ‘Tragic Idol’ and ‘Faith Divides Us - Death Unites Us’), while ‘Gothic’ is a throwback to the death meta days of old, which the band rarely revisits.

With barely a ten minute break between the two parts, the band is back and rocking with ‘The Enemy’ followed by a double take on ‘Symbol of Life’ (‘Erased’ and ‘Isolate’).

And though Nick Holmes often introduces this track as ”This isn’t the last song, this is The Last Time!”, this time it’s the last song for the night. And how suitable concert closer indeed – leaving us with hearts beating in the melancholy rhythm of PARADISE LOST.