OPETH & Orchestra at the Roman theater 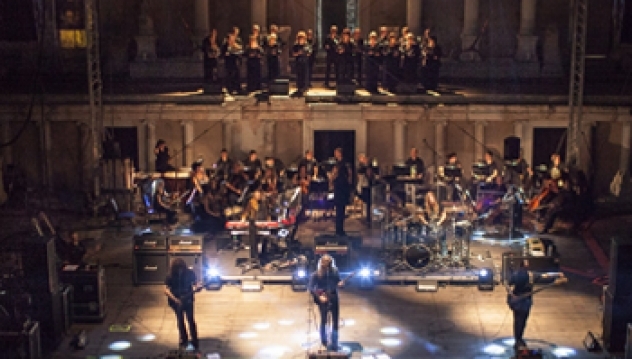 Without a doubt, this is one of OPETH’s busiest years lately, at least concert-wise. The Swedes have been on the road pretty much nonstop since March when the kicked off their tour with two splendid gigs in Athens and Thessaloniki. They continued throughout Spring and Summer and are to embark on a small series of special events (pretty much sold out by now) in Europe and the States on which they would present ‘Ghost Reveries’ in its entirety.

But the band’s most interesting concert for 2015 won’t take place in London or Stockholm but in fact just happened in Plovdiv’s ancient Roman theatre, the city streets still echoing with the mighty riffs and thick orchestrations.

And even though we’ve already said it a hundred times, we’ll repeat it shamelessly – the Tangra Mega Rock events in Plovdiv always come out somewhat special and OPETH’s gig was no exception – it was different and powerful, exclusive even.

Not only because this was the band’s first gig with a full on symphonic orchestra but also because of the months of anticipation, OPETH’s attitude towards the concert and of course, the thousands that gathered to experience it.

Of course we’re eager to compare this gig with similar previous Plovdiv concerts by PARADISE LOST, ANATHEMA, FISH and ASIA. And even though similarities are abundant, OPETH is a very different band and their show was pretty specific.

Not much has changed since our previous gig review – of OPETH’s performance in Sofia in 2012. Then we mentioned it is hard and almost impossible to accurately put in words what a gig of theirs is like – it’s just too good, polished to perfection.

Band leader Mikael has made sure things stay this was – it doesn’t matter if the band performs newer prog rock tracks off of ‘Heritage’ and ’Pale Communion’, or old headbangers off of ‘Still Life’ and ‘My Arms, Your Hearse’, all tracks just sounds so powerful, you’re left bewildered..

We knew what the concerts first, orchestral part would include. But while we could easily imagine how 'Eternal Rains Will Come' and 'Cusp of Eternity' would sound with a symphonic twist, we were really eager to see if things would work out with more death metal influenced tracks like 'Demon of the Fall', 'The Grand Conjuration' and 'Deliverance'.

And we’re happy to say things did work out fine. Conductor Levon Manukyan’s orchestrations proved to be effective and after the shaky start with 'Eternal Rains Will Come', the band and orchestra went full force on us, delivering tracks like 'The Drapery Falls' with superb precision and splendid sound.

The choir fitted perfectly in 'Cusp of Eternity', but it was on 'The Devil’s Orchard' and 'The Grand Conjuration' that OPETH and the orchestra sounded top notch – clear and powerful. and because of the special occasion, we were able to witness the first ever live performance of  'Voice of Treason'.

The exclusive moments continued in the second, purely rock/metal part of the gig – apart from the eagerly anticipated 'Heir Apparent' and 'Elysian Woes', we got to experience 'Godhead’s Lament' from ‘Still Life’ and the gentle 'To Rid the Disease' from ‘Damnation’, while the concert closer 'The Leper Affinity' threw us back to OPETH’s commercial breakthrough – the grand ‘Blackwater Park’.

Encore number 'The Lotus Eater' served as a frenetical end to this most satisfying night.

Thus after thousands of beers, tens of thousands of feet going up and down the slippery Ancient theater and even more thousands of screams for more, ended another edition of Sounds of the Ages.

It’s no coincidence it did end with a performance by prog champions OPETH – after all, special events need a special finale.