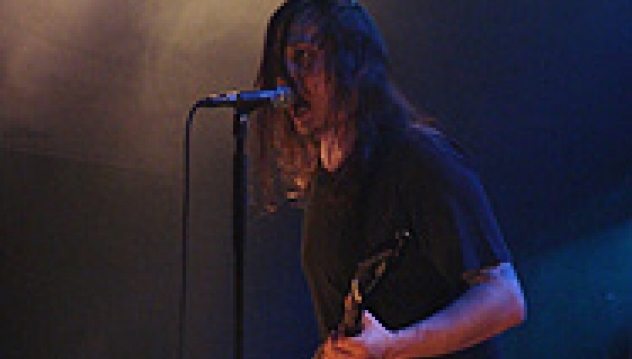 Oooouch... Crying, eh? And did you cry while headbanging at concert? No! So now get an aspirin and sing along the scream in your ears:

вЂњWe have the right to know what really happened in Roswell forty-seveeeeeeeen!вЂќ

This song is a stamp, a mark on the heart and a catalyst for tearing apart the lungs of screaming. And this is the last track from the dream concert, the concert weвЂ™ve been waiting almost 20 years, the concert that scattered our stamina, asses, health and the bad mood for moth(s) ahead. Hypocrisy Destroyed Sofia!

Let it be clichГ©!В  Let it be! We, who were there, we know. Who werenвЂ™t вЂ“ pray to whoever you believe this band to play in our country again. And still it wonвЂ™t be the same. Because last night HYPOCRISY shot their show for an upcoming DVD. Are you more angry now? Let it be! 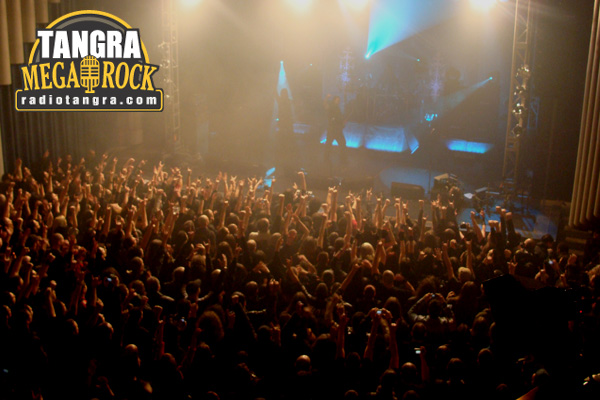 While I am writing my head is still rolling over the aching shoulders and frames of the evening are crashing one into another like metallers at, a HYPOCRISY concert. The evening of February 26. Around one hundred people are watching not a rehearsal but a real concert with full setlist and a band, so professional and hungry that it blows your mind. A slap in the face and next scene. A metal bar. In Black Lodge it is full of people. My bad. It is not full. YouВ  cannot breathe from people!

HYPOCRISY sit in their assigned cot, pouring in whatever alcohol is available and they meet their at the table for pictures and autographs. All of them! Scrolling fast forward and it is night again but now it is February 27 - the date that Most of Evil have announced months ago. 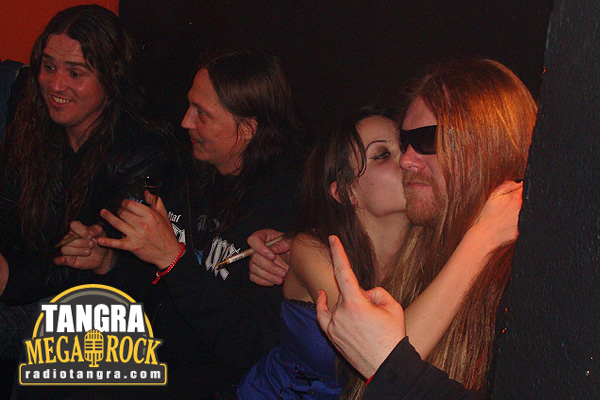 An ecstatic metal horde waits before Blue Box. Passes 7PM when the doors open and enthusiastic fans sink in the lobby. Among them one could recognize key figures from the Bulgarian extreme scene, journalists, devoted fans and ordinary drunkards. Hypocrisy is a magnet with a huge power of attraction. While I sit and wait, I see friends from all around the country.

Here is the leader of the band that has seized the Tangra TOP 40 chartВ from a week now. He stands quietly and waits to check his ticket. As they do 800 more hypo-maniacs. And in the club there reigns party вЂ“ people are burning in euphoria, eagerness and expectations. Is the band going to sound killer? ArenвЂ™t they going to be tired after the party last night? Are they going to play this and that song? How the sound is going to be? Come on, please, let it begin already! 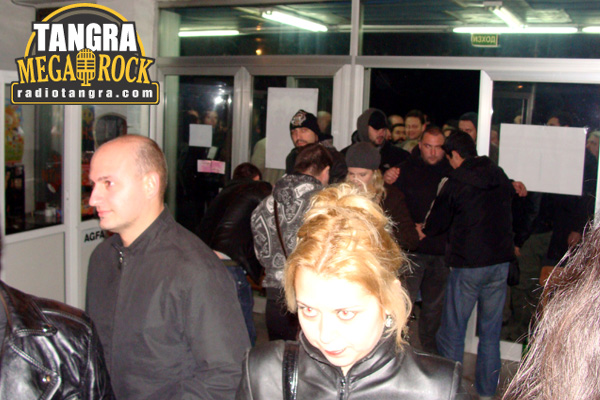 And began. Shortly after 8 PM, under a powerful roar of hundreds of voices and the greeting of a forest horn hands, Hypocrisy came out for Bulgaria. Without hello, without goodbye, direct kick in the moshpit with 'Valley of the Damned' and all hell broke loose. Without a break вЂ“ a second blast from 'A Taste of Extreme Divinity'. 'Hang Him High' вЂ“ even upstairs there are hanged ones вЂ“ the entire balcony shakes, no journalists, no guests вЂ“ we are headbanging because noВ  one knows where the night will lead us, and that agile feeling in the chest and in the abdomen commands the body.

We will shoot a DVD, you say? Well, we're ready. Looks like you are ready too. 'Fractured Millenium'. We are passing on the old school. Although with Hypocrisy old and new interweave, their songs sound with same power in 1992, in 2002 and today. And live! Oh, this voice, this hysterical shriek, passing in a growling roar in passing, Peter squeals and this thing could not be described вЂ“ it fastens the chest in a ring and in the next minute you are already overstraining your throat, liver and veins, as you screaming in response вЂ“ to Peter and to the emotions. 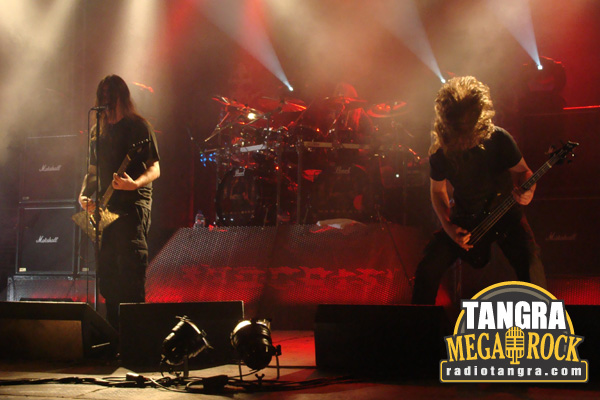 The sound is so well touched by the team that every song in the slashes in the brain to dig its roots in the heart and to command the body. Sweat pours everywhere, you drown in your sauce and the swat of the others, waving limbs and pushing your body in the people next to you. Or bear somebody on hands hands. Crowd surfing, moshing, headbang, totally devoted audience. You deserve it, guys. We also do. And because we deserved it, we get a merged in speed and weight blast from the past.

'Pleasure of Molestation', 'Osculum Obscenum' and 'Penetralia' thunder one after another and have the effect of an electrical strike on an epileptic on the crowd in front of the stage.

It is tight but a place for raging will always be found. Gently with the elbow, young man! The cameras cut on us we are cutting into one another, and Hypocrisy are pouring powerful metal then flow in one of the 'ballads'. The 'Apocalypse' arrived in Blue Box. And the condensate arrived even at the balcony and above it. And so on and so on. Whoever wants the setlist should buy the movie after some months. They did what we have selected (and did you vote in the poll the group launched for online selection of the songs for the tour?). 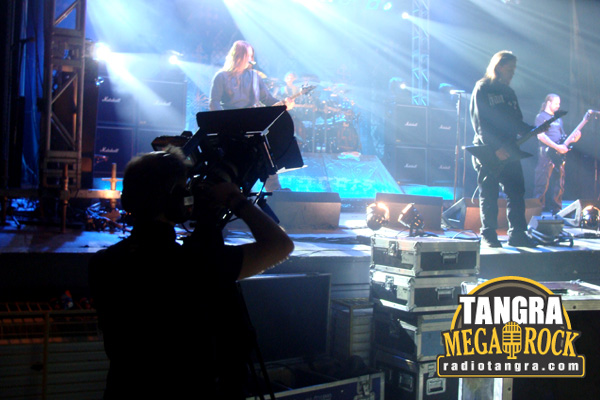 The riff of 'Fire in the Sky' grabs you by the ears and sends 800 heads in weightlessness. So strong and favorite song that you cannot sit still. Death metal, man. If you listen to this music without feeling the power of HYPOCRISY, honestly, I canвЂ™t understand you. We headbang pouring sweat and beer, shaking heads, hands, boobs and asses, whatever we have and we sing (okay, tear our throats) word by word with Peter TГ¤gtgren: "Like a fire in the sky, they came to Earth".

Quite biographical, huh? And as it came, so the first alien brigade flew away. But we know, we have read, there still remain some more kicks in the head. And while still yelling, the giant Horgh attacks his drums and with the reflex of a neurotic typist he pounds the beginning of 'The Final Chapter'. Hands up, the necks follow the rhythm, heads are held back and everybody plunges in the ritual of a metal concert. В

Of course, amid cries that fill the room, arises the favorite call of the Bulgarian fans "Pe-Sho! Pe-Sho". And Pesho who already knows laughs on the stage. We scream вЂњHYPOCRISYвЂќ and the four musicians are so happy ... "I told you that they are crazy, didnвЂ™t I?", remarks rhetorically TГ¤gtgren to Mikael Hedlund. Well, fortunately there werenвЂ™t people from the dispensary and no one got brought out. 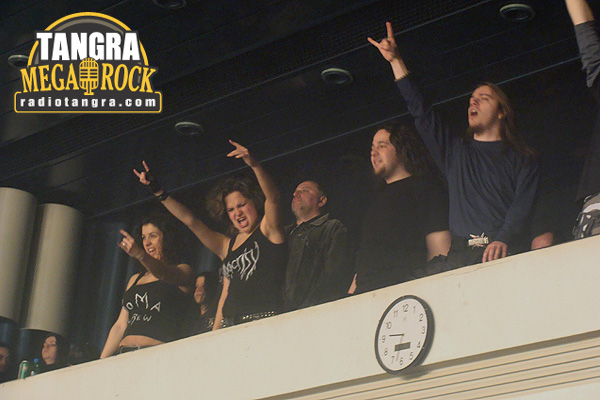 And again we come to 'Roswell 47'. A landmark song. The familiar melody ring in the ears, the sound of the guitar and Peter, so specific and loved, wakes up memories of the teenage years, of discovering this music and the awe, risen by this sound. And now it is here!
Go for the aliens and the hell with the good conscience and nice conduct. We are raging downstairs, we are raging upstairs and sing from the top of our lungs. The song ends. The concert ends. That's all, weвЂ™ll see ourselves on the TV. We are staring blurry at each other, head to the exit and, as it is planned, like real Vagabonds we fly to another concert. (New Model Army, just to point out).В CHECK OUT GALLERY 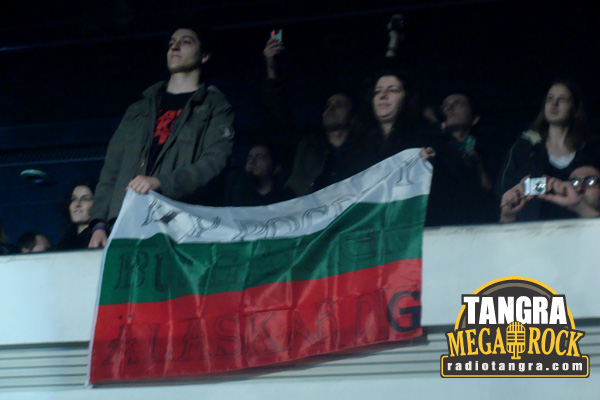