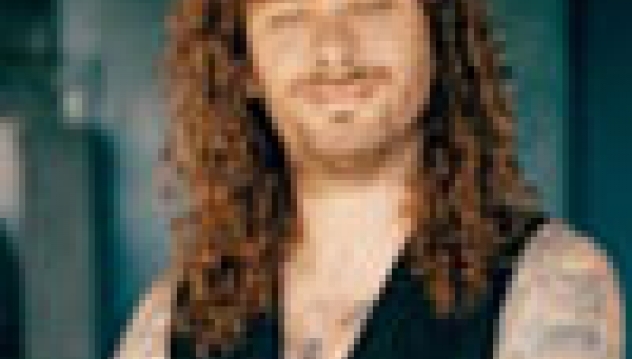 Some three weeks before the release of Helloween's new studio album "Gambling with the Devil", we got the chance to talk to the 42-year-old bass player and founding member of Germany's heavy metal masters,В Herr Markus Grosskopf, and find out more about the current situation in the camp of "the pumpkins", their tour with Gamma Ray, and the upcoming album "Bass Invaders" by Markus' super side-project, featuring an all-star line-up of guest bassists from Firewind, Destruction, Rage, Sodom, Mr. Big, Quiet Riot, Whitesnake, Edguy, Overkill, Mother's Finest and more...

Vassil Varbanov: Good evening, Markus! How are you?

V. V.: You'll play live in Sofia, Bulgaria on November 18. This is not the first time you'll be coming here, but the fourth. Why the hell do you perform so often in Bulgaria?

M. G.: It's a nice place to be, the beer is great and the people are very nice, that's why we keep on coming back.

V. V.: Regarding your new album, it's entitled "Gambling with the Devil". Do you guys like to gamble?

M. G.: Well, I'm always losing if I gamble. Some people get crazy about it, but I'm actually not really a gambling person. I know I'm gonna lose from the beginning, so I stay away from it.

V. V.: The first impression that comes to mind while listening to your new album is that the sound is even more convincing than before. Does it mean you've got some new equipment at the Mi Sueno Studio on Tenerife, or your producer Charlie Bauerfeind is getting better and better?

M. G.: Yeah, Charlie is like a good bottle of wine - the older he gets, the better he becomes.

V. V.: Was this stronger sound intentional or it just happened like this?

M. G.: Well, we thought we might put some more aggression to the guitars, and it worked out really well.

V. V.: "Gambling with the Devil" will be released on Halloween via SPV, right?

M. G.: Yes, and this won't be the first time we release a Helloween album on Halloween. It's some sort of a deadline we have, ha-ha!

V. V.: Last year you had this song "Light the Universe" featuring Ritchie Blackmore's wife Candice Night. Now you've got Biff Byford of Saxon in the intro "Crack the Riddle"...

V. V.: Let's also talk about your tour. The most interesting thing is that you'll be joined by Gamma Ray - the current band of Helloween's former member Kai Hansen. What do you expect from this tour?

M. G.: We wanna scare some people, he-he! There's a lРѕt of bands around, you know, and I think that if you wanna win you have to come up with an interesting package. We've been talking about it earlier on, and finally we came to the conclusion that it's gonna be a great package, so why not go out? I hope we'll make people happy.

V. V.: You're right that there are too many bands around nowadays. Some two weeks before your show in Sofia we'll have the 20 Years Nuclear Blast Festival here, featuring Amorphis, Benediction, Agathodaimon, The Revenge Project, Overdawn and a band that I know consists of friends of yours - Edguy. You played bass in the first two albums by Tobias Sammet's project Avantasia. The third CD shall be out soon. Are you playing on it, too?

M. G.: These were great albums - some of my favourites. As for the third album - I'm not playing on it. There's somebody else. I read about it in a magazine. Probably Tobias has got some different ideas and wants to work with other people this time. I, for example, like to work with different people every now and then, so... On the other hand, I was really busy doing other things.

M. G.: I just finished recording an album called "Bass Invaders". It includes a couple of heavy rock tracks without guitars. I just recorded bass guitars with a little bit of distortion here and there. You can hear Apollo Papathanasio, the singer from Firewind. I have Schmier from Destruction, Peavy Wagner from Rage, Tom Angelripper from Sodom - you know, all singing bass players. That's the German section - those people are writing songs and singing.
I have also a list of guests for some bass solo bits and pieces, like Billy Sheehan (ex-Mr. Big, Talas, Steve Vai, David Lee Roth), Rudy Sarzo (ex-Ozzy Osbourne, Quiet Riot, Whitesnake, Dio), Tobias Exxel from Edguy, D.D. Verni from Overkill, Jerry "Wyzard" Seay from Mother's Finest, Marco Mendoza (ex-Whitesnake, Thin Lizzy, Derek Sherinian, Blue Murder)... I was just too lazy to play all the solos, so I invited all my heroes.
The album is coming out in the end of January 2008 via the Italian label Frontiers Records.

V. V.: A decade ago bass players were kind of in the shade of singers and guitarist, but I believe things have changed now...

V. V.: People didn't realize that bass players were the actual leaders of many bands - let's just mention Steve Harris of Iron Maiden. Can we say that Markus Grosskopf is the boss in Helloween?

M. G.: No, I'm not the boss of Helloween. I'm one of the founding members together with Michael Weikath, and the others are listening to us if there's something that should get clear, but we decide things together.

V. V.: Back to your new album then. There are 12 songs on it, the first single being the balladesque "As Long As I Fall". Did the label choose it or it was the band's decision?

M. G.: We had like four tracks which we thought would be cool as a first single, but we couldn't decide which one, so we gave them to our management and the record company to let them decide. Everybody picked this one.

V. V.: Finally, when does your tour start?

M. G.: In the beginning of November, so we have like three weeks to prepare for you guys!

V. V.: And one last question: Which German band was the best one to take your path, according to you?

M. G.: That's very hard to say. It was a long time ago when Blind Guardian started doing this aggressive and very fast, yet melodic kind of thing and... You know, most of these bands are sounding totally different nowadays, of course - they just started up trying to find their way, but not copying us. They just did this thing for a couple of years and then found their own way.