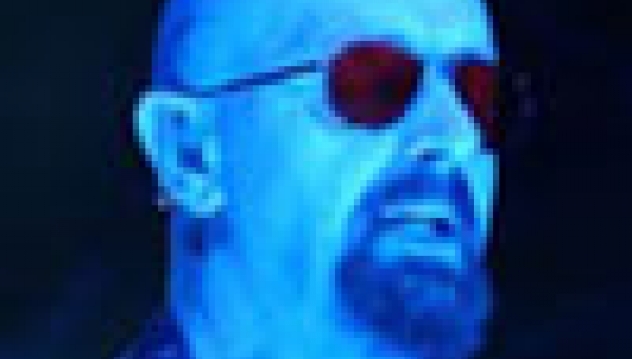 "I might be an old guy, but I've still got a young metal heart!"

A detailed conversation about Judas Priest's "Nostradamus", Fight, 2wo, Metal God Entertainment, the music industry, the past, the present and the future with the Metal God himself - Rob Halford!

Vassil Varbanov: Hey, God, how are you?

R. H.: I was at a party going crazy - that's what New Year is for! I was having a great time in Phoenix, Arizona.

R. H.: Yeah, I wished for the greatest heavy metal year ever - for Judas Priest, for the Metal God, for all of the metal fans around the world.

V. V.: In this connection, what exactly is Metal God Entertainment?

R. H.: It's a new company based about everything in the world of heavy metal. At the moment we're working exclusively with my solo activities, but for the future we hope that it will become a great organization for everybody in the metal community. We have a metal label called Metal God Records, and eventually we wanna make that open to all metal bands that might want to work with us. You see, it's just a great production company for all different aspects of metal - music, films, radio, magazines... We have a lot of ideas.

V. V.: As obvious from its name, it's not just a record label, but a huge platform covering all aspects...

R. H.: Yes, I love the word entertainment, because that's what we do. When you're in a band and you go on stage you're entertaining people - you're putting on a great show with visuals and sound, so I think that's the right word and that's why we decided to call it Metal God Entertainment. That's what we're all about - giving people good experiences and a fantastic night out.

R. H.: Yeah, we wanna look at everything. Since we created Metal God Records it's an opportunity to put together all of these great experiences. We had a great launch with "Metal God Essentials", and this was the next project. Thus we give people the chance to reinvestigate Fight. If you look at the movie and see the band working on stage, it was a really powerful metal group, so for a lot of Fight fans it's a chance to re-live that moment. I think everything that I do in metal stands the test of time - you look at things Priest has done, right from "Rocka Rolla" and "Sad Wings of Destiny" up to "Angel of Retribution" and "Nostradamus", which is coming this year.

V. V.: Fight called it a day way earlier before you rejoined Priest. Was this because of the project 2wo that you started with John Lowery and Trent Reznor?

R. H.: Well, the extraordinary thing to me is that I've done so many things in metal and I've always been dedicated to whatever project I work on, that I give everything I do a 1000%. I think Fight got lost in the turbulent time around the launch of the grunge scene from Seattle - the whole of the music industry was more focused on that, so unfortunately Fight was not able to follow through. Anyway, "War of Words" is there forever, as well as "A Small Deadly Space"... As for 2wo, I met John Lowery through some friends, and we had that surprise meeting with Trent Reznor in New Orleans - that's how the 2wo project came together. It's really cool, because recently, since "Metal God Essentials" came out, a lot of people have been wanting to reinvestigate the 2wo era, so I'm gonna re-release our album "Voyeurs" (1998) - I'm remixing it right now. I'm also gonna release the original demo recordings.

V. V.: Great! You know, I think that's the most underrated thing you've ever done.

R. H.: That's just the way in music. There's so much metal going around that sometimes things get lost in the mix, you know. Of course, when you have your own record label and website, RobHalford.com, could can go to the Internet anytime and check out things.

V. V.: People know you as the Metal God made of British Steel, however you're not some arrogant bastard - you've always been willing to help some of your younger colleagues, for example Ugly Kid Joe in their early days, Skid Row... How come?

R. H.: That's just because I live and breathe heavy metal 24 hours a day. I'm a metal fan as much as I'm a metal musician and I get constantly inspired by all the things that happen in music. I might be an old guy, but I've still got a young metal heart. I just love to see what's happening in the metal scene around the world every day - I check the Internet, go into MySpace and YouTube... I just like to keep in contact with all of the great things for the metal future.

R. H.: No, but that's the great thing about metal music - it keeps you alive and vital. My fan base is a mixture of young metalheads in their teens to people from my own generation. I love my fans in all different parts of the world, different races, different religions, different sexual orientation... We're all human beings and we should all love each other, and one of the ways of doing that is being in the metal world.

V. V.: You made me think of the next question now... Basically it's been 10 years since you revealed you're homosexual. People back then were a bit shocked, but I think they don't have a problem with that anymore. Do you think this makes the world a better place now?

R. H.: It will be a better place if we all get along. I see the troubles in the Middle East and elsewhere in the world and it's just terrible. I've lived a long life already and I only wish the world could get better. However, I think most people in the world just wanna live their lives and love one another and let each other have the freedom to get the best of everything in life. So it is with me - metalheads are all different, but at the end of the day it's all good.

V. V.: Back to Metal God Entertainment now. You started the company in the year when Trent Reznor said, "Fuck the record industry!", Radiohead tried to make some sort of an Internet revolution... How do you see the future of the record industry?

R. H.: I think everything is slowly settling down now. The Internet was invented over a decade ago, so like any other new invention on a global level it affects a lot of people, especially guys like myself and the fans in the music world. I think record companies are still very important and a vital part of the industry, but equally there's an opportunity now for you to choose how to pick and enjoy your music - you can either get if from the Internet or from CD distribution companies. I donвЂ™t think it's cool to say that the industry should fuck off - that's silly. I think you should embrace every opportunity to make your music available on a worldwide level.

R. H.: That would be a good idea! When you look at the great things that have happened in metal over the years, you often think about how it would be if certain groups reunited again. Of course it was exciting to see Led Zeppelin reunite just recently in London, and hopefully they get back on the road. At the end of the day, regardless of what the situation is, the most important things are the music and the fans, so it's important to repair any problems. When you do that, you get back to the real deal. I'm sure there are bands that I can't even think of now that I would love to see reunite.

R. H.: Yeah! I think there's an element of heart and soul - you don't do it for the money, but because you love being in a band that you wanna be in, you love the music you play, you love to see the reaction of the fans, so it's a combination of all these elements.

V. V.: And what do you think about the return of Van Halen - the current Band of the Week on Tangra Mega Rock?

R. H.: I think it's unfortunate that they don't have the original bass player, Michael Anthony. Of course it's exciting to see David Lee Roth back on stage again... I remember many, many year ago Judas Priest opened up for Van Halen in Los Angeles - that's a vivid memory for me. Van Halen had a very important voice in rock'n'roll, so it's exciting to see them back together. It's a great show to watch.

V. V.: Finally, what should we expect from Judas Priest's "Nostradamus"? Is it the best record you've ever done?

R. H.: Yeah, I think it's some of the greatest metal Priest has ever made. It's a wonderful story about this real man that lived 500 years ago in France. A man that was able to look into the future. He had a very complicated life and we're talking about every aspect of it - his prophecies, the difficulties he faced with different people... We're surrounding the entire story with some of the greatest metal Priest has ever made. It's everything you love in Judas Priest. We're mixing it right now and it should be out sometime this year. We're also going on the road doing some massive world tours - probably two. We'll be doing the classic Priest tour, so you'll get to hear all of your favourites like "Breaking the Law", "Living After Midnight", "Electric Eye", "Metal Gods", etc., and then we'll be doing a Nostradamus Tour where we'll play everything from the album - from the beginning to the end. It's the year of the Priest!