SEPULTURA in our studio 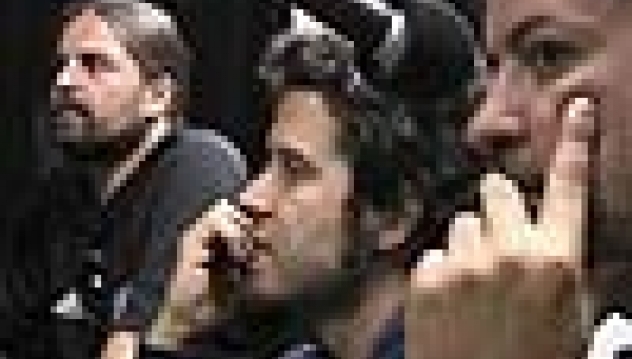 watch the interview on TANGRA TV

The studio of our sports showВ  'JitBall' is hosted by Koko Stoynov and Vassil Varbanov. And these 2 are so damn' hospitable:

HELLO BOYS, HOW ARE YOU?
All Together: Hello

THAT WAS JUST TO MAKE YOU FEEL AMONG FRIENDS. WELL, THIS IS YOUR SECOND DAY IN BULGARIA. HOW HAS IT BEEN?
Andreas: Well, we came straight from Brazil. This is the first show of the tour. Our second time in Bulgaria, last time we played in Kavarna. It was great the first time!

It's great to start the tour here. We're gonna do a lot of countries in the region like Romania, Russia, Ukraine, Belarus and a lot of places in central Europe. Jean is with us, you know our new drummer. In the band for three years but still new.

DERRICK HAD SOME PROBLEMS WITH THE RUSSIAN AUTHORITIES. DO YOU GUYS IN BRAZIL NEED A VISA TO GO TO RUSSIA OR JUST HIM, BECAUSE HE'S AMERICAN?
Andreas: We all do. But the Russian embassy didn't give a visa to Derrick because he is American. He had to go to the United Stated and go to the Russian embassy in New York...

BECAUSE THEY DON'T HAVE INTERNET AT THE EMBASSY?
Well it's a lot of bureaucratic stuff. But everything went fine, they gave him a visa. HeвЂ™s only gonna be a little tired today, you know. He's gonna go straight to the stage.

WE WERE VERY MUCH IMPRESSED BY THIS GUY WHO DID THE "DANTE XXI" ARTWORK, STEFAN DOICHINOFF, WHO IS FROM BULGARIAN DESCEN. HE SEEMS TO BE AN AMAZING GUY. IS HE POPULAR IN BRAZIL?
No, not really. On the art underground scene he seems to be very popular - he did expositions in, like, London, England and New York and many different places. And he has a very distinctive style. Igor was the one who brought him to do the art. I think he had been working with him on some other project. And so it's great.

He came up with a whole new way to portrait Dante Alighieri. The "Divine Comedy" had already been used for many different artists, bands and movies and stuff so we wanted to find a new way. And Stefan was the perfect guy to do that.

And it's the same with "A Clockwork Orange". We wanted to have our own impression, our own vision of it. We didn't want to be focused on Stanley Kubrick or anybody else. We were glad to have the opportunity to do something new and not copy something that had already been done. 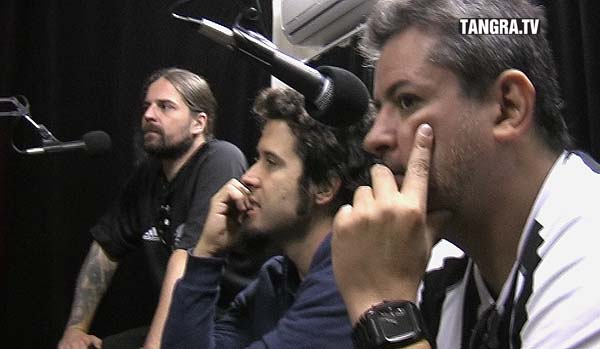 SO NOW IT'S FOOTBALL TIME. WE SEE YOU'RE ALL WELL DRESSED. PAULO HAS AN ATLГ‰TICO MINEIRO JERSEY ON, ANDREAS HAS THE ALL BLACKS RUGBY OUTFIT. WHAT ABOUT YOU, JEAN?
Jean: I donвЂ™t have a team, man. I donвЂ™t like football.

REALLY? SO YOUвЂ™RE NOT BRAZILIAN THEN.
Andreas: Yeah, heвЂ™s not Brazilian. WeвЂ™re yet to find out where heвЂ™s from.

YOU KNOW WHAT? YOU CAN GO TO THE CUSTOMS. THE RUBBER GLOVE PROCEDURE ALWAYS HELPS.
Ahahaha

SO PAULO HAS AND ATLГ‰TICO MINEIRO TEE ON. THIS YEAR THERE IS A BIG EVENT AROUND THIS TEAM, LIKE AN ANNIVERSARY?
Paulo: This is actually the end of it. It started March 25th last year and is going to finish on this one. LetвЂ™s not mention it was horrible. ItвЂ™s the 100 years anniversary of the team.

WHO IS THE GREATEST PLAYER IN THE TEAMвЂ™S HISTORY?
The one that people like the most is Reinaldo, the number 9. But it had many great players throughout the years.

I CAN REMEMBER TONINHO CEREZO.
Paulo: Yeah, heвЂ™s one of them.
Andreas: He also played in SГЈo Paulo, my team.
Paulo: See?? we helped SГЈo Paulo!
Andreas: He actually did better in SГЈo Paulo. He became world club champion twice. He also played against Barcelona with Stoichkov and won. And then they played against AC Milan, beating them 3:2.
Paulo: But he learned everything in my team!

DO YOU KNOW ANY OF THE PLAYERS OF SГѓO PAULO PERSONALLY?
Andreas: Yes, I know RogГ©rio Ceni (goalkeeper, officially recognized by FIFA as the goalkeeper who scored the most goals in the history of football: 83). HeвЂ™s a close friend and he likes rockвЂ™n roll.

I always visit their training camp when we have something new from Sepultura. I bring the stuff and I exchange t-shirts and stuff. I know the coach, Muricy Ramalho. And we have this game every end of the year, during Christmas. Paulo is the main organizer of this game. The old players from AtlГ©tico Mineiro, including Toninho Cerezo and Juliano Belletti, Reinaldo also participate. We invite a lot of musicianms to participate. Fred from Olympique Lyonnais also participates. Eder as well. So we know a lot of the players personally.

OK. LETвЂ™S TAKE A DEEP BREATH WHILE PLAYING вЂњFILTHY ROTвЂќ. DERRICK TOLD US THAT THIS IS THE MOMENT FROM THE BOOK AND THE MOVIE WHEN MALCOLM MCDOWELL WAS BEATING THE SHIT OUT OF THIS OLD DRUNK AND THE STRANGE CHANTS ARE LIKE YOUвЂ™RE SOME CRAZY THUGS WHO ARE SINGING WHILE DRUNK. I KNOW PAULO DOESNвЂ™T DRINK THESE DAYS. YOU WANT TO BE FIT AGAIN? IS ALCOHOL BAD?
Paulo: Yes I stopped. Because I used to drink too much. And now IвЂ™m trying to shape up again in order to play football and kick everybodyвЂ™s ass.
Andreas: But you know, if you drink like two beers, a glass of wine or something вЂ“ itвЂ™s OK. Anything you abuse is bad. Even water. If you drink like 50 liters of water youвЂ™ll die. Abusing anything is a problem.

YESTERDAY I READ ON THE INTERNET THAT THIS ALBUM DIDNвЂ™T DO GOOD RECORD SALES IN THE US, THOUGH. WHAT IS IT LIKE IN BRAZIL?
Andreas: You know. For a band like us with some 25 years of history it doesnвЂ™t really matter if we sell a lot or not. It is something that happens to every band, especially in time when we have a transition of technology.

When Sepultura started we had only fax machines. And then you have cell phones and the Internet and downloading and stuff. And the sales went down a bit. But thatвЂ™s happening to everyone.

And people see only that Max is out or IgorвЂ™s out. People have to look at this with an open mind. This is music, not gossip. We are not slaves of our name. We recreate Sepultura every day. ItвЂ™s in the present. WeвЂ™re not slaves of our past. We respect it, we play everything, but вЂњA-LexвЂќ is receiving a very good response. We have been doing well in the charts in Europe. In Brazil has sold more than 5,000 copies in less than a week. You know, in America вЂ“ I just received an e-mail saying weвЂ™re in the Billboard chart at number 80 or 60, something like that. And this hadnвЂ™t happened since вЂњRootsвЂќ you know. So it is something good, something positive.

But you always will have people talking shit about it. ThatвЂ™s part of Sepultura life. Since day one, even before I joined. The band was founded in Belo Horizonte, which is a very religious city in Brazil. Since then we hear shit. Always! Every day!

I TOLD YOU THAT THIS GUY BEHIND ME WITH THE BRAZILIAN T-SHIRT ONвЂ¦
Paulo: Koko. (Later, off the record, he explains that this means shit in Brazilian slang)

вЂ¦IF BRAZIL PLAYS AGAINST BULGARIA, HEвЂ™LL CHEER FOR BRAZIL. THAT IS SOMETHING HE ALWAYS SAYS ON THIS RADIO SHOW.

KOKO: I told Juninho Paulista the same thing when he was here with Atletico Madrid and they played against CSKA.

Andreas: But Bulgaria has some great football too. Especially in 1994 when they knocked out Germany from the World Cup which was a great achievement. And it was the third place, right? Forth place? On the semi-final they lost to Italy. Roberto Baggio вЂ“ our hero!

Porto Alegre also have two great teams - GrГЄmio and Internacional. They hate each other. And in Belo Horizonte вЂ“ AtletГ­co Mineiro and Cruzeiro. In Sao Paolo we have four teams - SГЈo Paulo, Corinthians, Palmeiras and Santos, you know with Zico and Pele. Everywhere you have your own rivalry, but the main one is between the states of Sao Paolo and Rio, Cariocas.

JEAN, YOUвЂ™RE YOUNGER THAN THE OTHER GUYS. WHAT IS THE FEELING LIKE TO BE IN SEPULTURA? ANDREAS JUT MENTIONED IT IS A BAND WITH 25 YEARS OF HISTORY. IS IT LIKE BEING A YOUNGSTER AMONG OLD FARTS OR IS IT COOL WITH NO GENERATION CLASH?
Jean: No, itвЂ™s ok. ItвЂ™s great for me. IвЂ™ve been listening to these guys since I can remember. It is like a cycle in your life. I imagine like 15 years ago I was in my bedroom listening to them and now I play with them. But there is no clash between us or anything like that.

MONICA CAVALERA? AS FAR AS I REMEMBER THAT SHOULD BE IGORвЂ™S WIFE?
Andreas: Ex-wife!!!

BUT SHE IS STILL YOUR MANAGER?
Andreas: In Brazil! She books our shows in Brazil and organizes everything. Elsewhere we have Todd Singerman (MotГ¶rhead's manager).

AT THE END OF THE DAY, YOU STILL HAVE SOME RELATIONS WITH THE CAVALERA FAMILY?
Andreas: Acually I know Monica since my school days. We used to study together. I was the one who put together Monica and Igor.

IT WAS NOT A LUCKY MARRIAGE. AFTER ALL IT CAME TO A BITTER ENDвЂ¦
Andreas: It was a long marriage, they had three kids. I think it was alright. So I know Monica for a long time. She loves the band, she loves Sepultura, she loves the music, and she knows a lot about the situation in Brazil, knows how to put us in certain places, etc. Besides all the problems with Igor, professionally we continue working together and itвЂ™s fine.

SO, A VERY PARTICULAR QUESTION CONCERNING THE DRUMS, COMING FROM GENGATA ON SKYPE. IT IS вЂ“ "WOULD YOU CHANGE ANYTHING IN THE ENTRANCE OF THE DRUMS IN вЂњTROOPS OF DOOMвЂќ IF YOU HAD THE CHANCE, BECAUSE THERE IS A SLIGHT DELAY WHICH OBVIOUSLY IS NOT FITTING VERY MUCH TO THE GUITAR POWER AND THE HEAVINESS OF THE RIFF?"
One over the other: Ha-ha-haвЂ¦ What delay? Where?
Andreas: I think heвЂ™s actually talking about the recording. вЂњTroops of DoomвЂќ was first in вЂњMorbid VisionsвЂќ, which was first released. And then we re-recorded the song for вЂњSchizophreniaвЂќ, when we re-released the album through Roadrunner. So I believe he is talking about the extra heavy drums there that we put on the beginning.

But that is something only for the studio вЂ“ live it is completely different. On stage we develop the songs further and we grow up. We do it totally different. Well, not totally, but different.

FINAL THING. THIS IS A VERY UNIQUE CHANCE FOR US. WE DO THIS WHEN WE HAVE NON ORIGINALLY ENGLISH SPEAKING BANDS IN THE STUDIO. BECAUSE IF YOU TRY TO SAY THE BIGGEST INSULTS IN ENGLISH EVERYBODY WILL UNDERSTAND. THE THING IS THAT WHEN WE HAVE FINNISH GUYS OF GUYS FROM OTHER PARTS OF THE WORLD WE KINDLY ASK THEM TO SAY THE MOST DIRTY WORDS IN THEIR OWN LANGUAGE.В NOW, IT'S YOUR TURN... 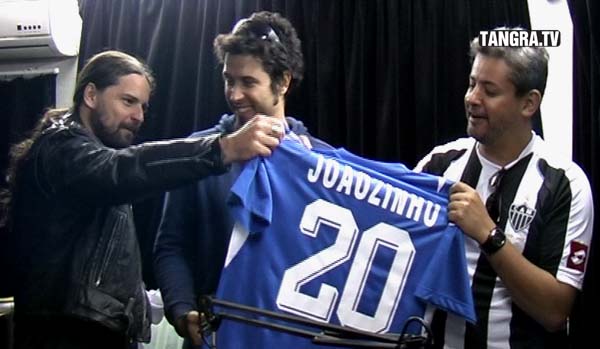 In 82 it was tough, I was young, I cried a lot, but no heart attack. In 86 it was not that much because the team was not, Zico, wasnвЂ™t in his best physical condition. SocratesвЂ¦ The generation of 82 that tried again, with the coach Tele Santana. France had Platini and many great players. But 82 was really unjust. I believe Brazil should have been the champion. Like Holland in 1974 or Hungary in 1954 вЂ“ best teams that didnвЂ™t win the cup.