BIOHAZARD in Sofia by Stefan Topuzov 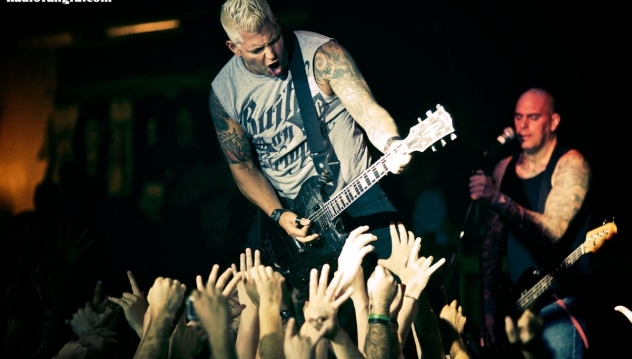 “Ostavka!”*, Billy Graziadei starts to chant after the second song at the BIOHAZARD show in Sofia, Bulgaria, Friday night, putting the concert in the context of the ongoing protests against the country's brand new, ridiculous government.

A few seconds earlier I had shouted in the year of the guy next to me something like “I can't believe I'm seeing my favorite band at a show like this.”

Well, calling BIOHAZARD my ONE favorite band may be an overstatement... But having spent most of my teenage years in the 'Lyulin' neighborhood of Sofia – pretty much 'the projects' of the Bulgarian capital – living exactly five blocks from the nearest subway station, and having to take that walk every fucking day, often listening to 'State of the World Address' at full volume on my walkman...

I obviously have a soft spot for BIOHAZARD as they hit an emotional note for me in a way that's unmatchable by other bands.

Probably every single one of the about 500 people who attended the show in 'Mixtape 5' last night have their own, similar story about BIOHAZARD.

And to see this band in a comparatively small venue, with no barricades and together with an absolutely berserk crowd that feels the same way about the show as you do... it's one of the greatest things a fan can hope for.

The show, of course, starts hours earlier, ignited by the metallic hardcore of Macedonian band HARDFACED.

This is far from the first time the Ohrid based band plays in Sofia so its mix of Slayer riffs, melodic solos and vocal trade-offs by two singers over this relentless musical foundation – imagine a mix between Vendetta and Stampin' Ground, really – is well met by the fans.

And then LAST HOPE do exactly what LAST HOPE is expected to do – deliver an energetic hardcore-punk show that travels through the band's discography, not missing the recently released split with brothers in arms VENDETTA.

One could hardly just sit there and watch this band play – the moshpit in front of the stage intensifies and by the time the band gets to its final song, fan favorite 'Fuck Police,' pretty much everyone joins in.

And it is all happening for a reason – LAST HOPE have headlined many shows, not smaller than this one, in the same club, and the band is one of the few things in Bulgaria that puts some substance in the word 'institution,' that has otherwise turned into a joke pretty much...

... Speaking of institutions, we get to see another one too.

And then, of course, 'What Makes Us Tick' – the moment I decide not to care that my hand was in a cast merely a week ago, after being broken, and I decide to dive in into the moshpit.

BIOHAZARD play one classic after another, all from the first three albums – 'Each Day,' 'Black and White and Red All Over,' 'Retribution,' 'Wrong Side of the Tracks,' 'Down for Life'... no point in dropping song names, really.

The band played everything it was supposed to play! The only step outside of the classics are a couple of songs from the newest album – which is awesome, by the way 'Reborn' and 'Vengeance Is Mine'.

Actually they're all songs that the band has written in its classic lineup. We are only one Evan Seinfeld short of seeing said lineup.

Without him BIOHAZARD are a slightly different band. Not necessarily in the bad sense. Instead of having a couple of frontmen that would share vocal duties, the band now has pretty much one – Billy – while the new bassist, Scott Roberts, sings rather rarely and it is mostly backing vocals.

This way – by shifting focus mostly towards Billy – the band copes with the absence of a significant figure like Evan. And it works.

Meanwhile, in front of the stage it is full of people that are doing their best to recreate the video for 'Punishment' – a video that has probably been the first glance of hardcore culture for many people. It's constant moshing, stagedives and singalongs with the band – something that doesn't really stop from the first note of 'Shades of Grey' to the final of closer 'Hold My Own' and then carries on into the encore with 'Five Blocks to the Subway.'

I'm so sweaty that – and thank God actually! – no one can see that I'm actually crying from joy.

And I guess that many of the people that were in the club last night, are doing the exact same thing.

* “Ostavka” – “resignation” in Bulgarian; basically what the current protests in Sofia, Bulgaria have urged the government to do.