BIOHAZARD in Sofia by Stefan Yoirdanov-Stiff 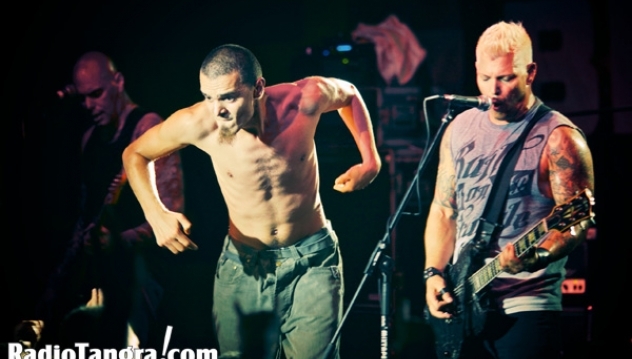 “Be who you are and say what you feel, because those who mind don’t matter and those who matter don’t mind.”
Bernard Baruch

Who wouldn’t have wanted to be here tonight and why? I can not imagine such an individual.

It’s also the 22-nd day of the massive civil demonstrations and protests against its (not ours) governmental establishment. Those who can not the connection have obviously forgotten what the driving force behind our music was and still is. It’s rebellion, reaction and open attitude.

Those people are not among us= The rest are those who matter and because of their participation in the most important summer festival this year on the streets of Sofia, #ДАНСwithme, the event of the day, has been postponed for an hour. I don’t see any mad people in front of the club tonight. It’s just the way it is.

There are still not many people indoors when HARDFACED start their set.

One of their vocalists is sporting STRIFE shorts and the other is wearing UNEARTH shorts, but their guitar sound is often following some familiar SLAYER patterns. I can hear some CROWBAR influences, but it could be only in my head really, so I’m not sure.

There’s mixed activity among the small crowd - some people are just watching, others are seem to be unsure how to react as they obviously don’t know the songs and there’s this small group of people who are having fun like there’s no tomorrow.

When I go outside for a fag, the crowd seems to be bigger than it was an hour ago.

Small groups of friends down beers, have a laugh and tell each other funny stories. Mothers with little kids and pedestrians try to escape the crowd and get to the other side of the underpass.

Hungry dudes swallow bits of Chinese food and BBQ from the fast food restaurants around the venue.
.

Our friend Shutta has taken his place behind the merch stand and sells copies from the latest releases of PIRANHA, S.I.M.B и VENDETTA along with the newly released VENDETTA/ LAST HOPE split CD and the killing new compilation 'Balkan Hardcore 2013'.

A few people are putting their new BIOHAZARD shirts on and pack the old ones in the side pockets of their baggy cargo shorts. Jumping and stage diving are yet to come.

LAST HOPE are flawless! No one expected them not to be actually. I don’t know if I can add anything more to this, really, as they are the most important Bulgarian hardcore band. And you know what? In the eyes of their dedicated fans they are already a classic. They are up there, with the best European hardcore acts.

Me neither. I haven’t had the chance to speak to Alex on the subject, but still I believe his vocals now sound a little bit more oldschoolish and his stage presence is more, should I say, open. Last time I saw them, about an year ago, he was more aggressively and military-like acting on stage. I don’t exclude the possibility that it happens only in my head though.

Somewhere in the middle of their set a drunken individual who was later carried away from the venue, thew a beer can at Alex. I can instantly remember how drunken punks threw some broken beer bottles at Underworld in London.

Phil Campbell of MOTORHEAD once told me how they had a razor blade suck between two coins thrown at them in Serbia. That sucks, man!

LH finish their set in a very professional manner, but I doubt they had no bad feelings about what happened.

Sofia’s been a lonely place since BIOHAZARD departure 4 years ago.

Evan is missing tonight, because he left the band when he recorded the last album 'Reborn In Defiance'. Now Scott Roberts has taken his place and his voice fits just fine so Evan hasn’t been that missed.

'Shades Of Grey' not only opens this gig but sets standards that are going to be followed for the next two hours. These are the standards of a band with a punk attitude - people flying in the air and landing on the ground, people crowdsurfing, people sitting and then jumping when the pusle of the music really starts getting into them, people walking on other people’s heads, you know what I mean.

Billy runs from one side of the small stage to the other, gets on people’s shoulders, continues to play, jumps off and runs to the opposite end of the venue. This man is a machine, a generator of energy.

90% of the songs tonight are coming from the BIOHAZARD albums - 'Urban Discipline' (1992) and 'State Of The World Address' (1994) -  'What Makes Us Tick', 'Down For Life', 'Wrong Side Of The Tracks' one by one satisfy every single demand, all killers and no fillers.

“Are you ready?" - Billy yells at us with the zeal I know from a certain and unforgettable BLOOD FOR BLOOD show in Berlin a few years ago - "You’re not ready yet. ARE YOU READYYY...”

In this very moment 'Tales From The Hard Side' starts and the year is 1994, again, and BIOHAZARD are causing mayhem and chaos again. The threatening and doleful guitar solo, Bobby is dancing around himself and all the things you know from that mind-blowing video are happening again.

'Reborn' brings it all in nowadays again. Billy says that there’s something fucked up about moving clockwise, as all the things naturally move that way, but still the world is a wrong and a fucked up place, so he suggests that it’s time to move in the other direction and commands a big circle pit moving against the grain.

I don’t see any sense to count the songs we hear and the feelings we feel tonight.

Of course 'Vengeance Is Mine' and 'Black And White And Red All Over' are being played. Of course we all sing along BAD RELIGION’s 'We’re Only Gonna Die'.

Mic stands are being destroyed, guitar strings are being torn ('Punishment'), some solos and riffs are being sacrificed for the sake of energy and jumping, but that’s fine. It’s not a fucking opera! It’s rock’n’roll! It’s punk!

This is the essential difference between the street and the pop music. You mught have only 5 fingers on each hand and there might be only 5 blocks to the subway, but in the end of the day they separate survival from the simple existence and we both know which one is more important. Ostavka, Sofia, ostavkaaaaa!