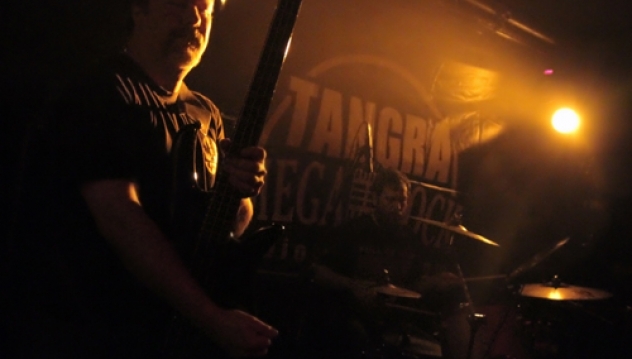 Tangra Mega Rock have been involved in the concert business but this is only the second time they organize a gig like this (dare we call it boutique?), the previous one being Steve Albini’s Shellac and their blistering performance way back in 2008.

We expected to see them as a trio and a trio they were but not wuite as expected. The heavily bearded band leader Tim Moss is always there, usually backed by Billy Anderson (the producer of bands like Melvins, Neurosis, Agalloch, Mr. Bungle and Sleep) and Dale Crover (drummer for the Melvins and for a very short while – Nirvana).

On this tour, however Moss has chosen to play alongside Faith No More bass player Billy Gould and mysterious Hungarian drummer Balázs Pándi.

Right at the start of Mental Architect’s warm-up set, I hear orginal rawknroller Martin Petrov’s comment – “These guys are one of the best bands from the Balkans!”. Rightly so – the Architects are math rock champions, storming on with a completely instrumental set of old and new material, presented passionately yet perfectly.

What happens next is something completely unusual for Sofia yet oh-so typical for Holland’s Roadburn festival, for example – a bunch of uncompromising bearded dudes who have come to split our heads with a ton of fuzz, psychedelia and stoner rock. And a load of experimentalism. We can’t produce any setlist – these were just two (or maybe three? Or even four?) ultra long tracks, weaving left and right, high and low into a monstrous wall of noise (a lot of it!), buzz and titanic Sabbathian riffs.

No vocals, just a constant onslaught from Gould, Moss and Pándi.

A great gig. And a great lesson in what the underground and true stoner rock is about.