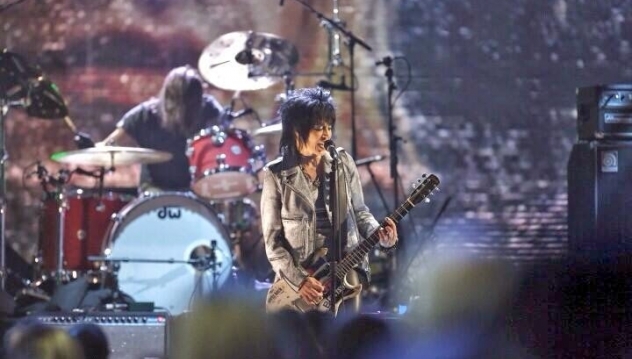 NIRVANA were joined by Joan Jett, Kim Gordon, St. Vincent and Lorde for their live performance set at the 2014 Rock And Roll Hall Of Fame induction ceremony in New York on Thursday, and video of the event has surfaced.

Jett opened the program with a searing rendition of the band’s signature tune, 'Smells Like Teen Spirit'; Gordon of Sonic Youth fame followed on 'Aneurysm'; St. Vincent (a.k.a. Annie Clark) performed 'Lithium', and New Zealand pop sensation Lorde closed out the evening with a version of 'All Apologies.'

"Nirvana were artists in every sense of the word," said R.E.M. singer Michael Stipe in his induction speech.

"Nirvana tapped into a voice that was yearning to be heard. Nirvana were kicking against the mainstream. They spoke truth and a lot of people listened."

"They were singular and loud and melodic and deeply original," he added. "And that voice. That voice. Kurt, we miss you. I miss you. This is not just pop music. This is something much greater than that."

Kurt Cobain’s mother and sister were on hand, with his mom saying, “He would have pretended not be proud. But he would be. I miss him so much. He was an angel.”

Cobain's widow Courtney Love and daughter Frances Bean stood alongside the band, with Love seen hugging drummer Dave Grohl at one point during the proceedings at New York’s Barclays Center.

More on this story